[Editor’s Note: This one made us all laugh, a little harsher than we usually like, but the statements are true and the logic is solid. Thank you for your contribution.]

“The probability of someone watching you is directly proportional to the stupidity of your actions.“ – David Bowles

I sent this before your site went down. After that I tried to send this to Aux Sentinel. No action there, so I am trying again here now that you are back up. In late May (possibly early June?), a cadet acquaintance of mine posted one of your stories in the captalk forum. To this he received the following response from Dave Bowles aka SarDragon, which I saved only by copying the text.

“Your source is unreliable, and biased against CAP. It is best left unread, and your time is better spent elsewhere, even shining shoes.”

Ignorant and arrogant turds like Major Bowels are pathetic in attempts to intimidate our cadets and senior suck-ups away from learning about the drugs, alcohol, murder, suicides, forgeries, rapists and pedophiles that have graced and disgraced your Civil Air Patrol. I want to place him on a leash and walk him through his own mess, but as I mentioned, I don’t have a screenshot of the original captalk thread. The coverup CAP members at captalk have deleted it. Can you help? I have no more time to work on this project.

P.S. You need to post a summary list of all the Civil Air Patrol suicide stories. I thought you had done that in May, but I am not finding it so I used the link in your Pillars Story.

[Editor’s Response: The original thread was May 29th 2019 and we do have it. See below We’ve made some minor corrections to your submission for inclusion as an article. If you have any objections or corrections, just let us know.] 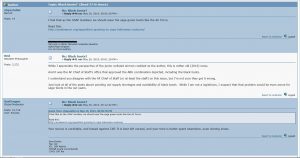 5 Comments on "Irritable D. Bowles Begging for a Logic Enema"