[Editor’s Note: We received an anonymous tip regarding this crash. Thank you for your contribution. He received the majority of his flight training from the Civil Air Patrol. This plane crash in California was attributed to pilot error.]

POMONA – Investigators have ruled a plane crash that killed a Pomona man and a pilot last year was the result of an aggressive flight maneuver performed by the newly licensed flight instructor at a low altitude, according to the National Transportation Safety Board.

The report on the crash released last week stated Torres was taking an introductory lesson from Shope after leaving Chino Airport that morning.

A witness stated she saw the airplane make an abrupt, swooping and descending left turn.

She described it as “extravagant” and similar to an aerobatic maneuver typically seen at air shows.

The witness also reported the airplane began to roll out of the turn sending the craft nose-first into the ground.

The impact was so violent that parts of the airplane were scattered for dozens of feet around the crash site and caused the wreckage to burst into flames.

Shope had been issued his private pilot certificate with a glider rating in November 2008.

He then received his commercial pilot certificate with ratings for airplane single-engine and instrument airplane on January 24, 2011.

About four months before the fatal crash, he was issued his certified flight instructor certificate, records show. At the time, he applied for his instructor’s certificate, Shope had logged about 350 flight hours.

Investigators determined it didn’t appear there was anything mechanically wrong with the airplane.

Shope’s love of aviation began when he received an introductory flight for his 13th birthday. At 14, Shope soloed in a glider after completing flight lessons at the Los Alamitos Glider Training Squadron 41 and received his FAA Glider Pilot license on his 15th birthday. At 16, Shope soloed a powered aircraft, and received his FAA Private Pilot license at 17. 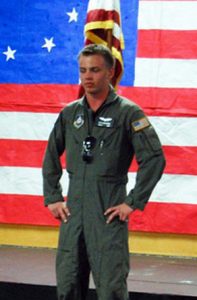 He was a confident and excellent pilot, with a true passion for flying, said Lt Col James Welliver, Squadron 41 Commander. “Every time I flew with Matt, you could see that he had everything dialed-in.”

National Transportation and Safety Board Report