[Editor’s Note: Fresh off the reports of Civil Air Patrol’s Machine Gun Dey, Major Norton Malware and USAF’s Col Green… this editorial came through our Contact Form and was timely and well composed. We agree with the author that it is important to learn the sources of right (or left) wing radicalization. We also agree that Civil Air Patrol does trumpet their good news while using trolls and attorneys to bury its dark side. Thank you for this contribution.]

Your comment system appears to be down, so here’s a full-scale article through your Contact form. I am hoping you might help us expose a tactic used by some members to manipulate Civil Air Patrol’s hive-mind in YKYICW and other Facebook groups. When a CAP member appears in the news having committed some anti-social offense or crime, CAP trolls enter the discussion about the event to slam the journalists and intimidate any who echo their words. The trolls proclaim that Civil Air Patrol should not be mentioned in a news article if the event happened off CAP activity time or had nothing to do with Civil Air Patrol functions. Some younger members, lacking experience and intimidated by rank and ribbon, had guzzled that Kool-Aid in the past. Recent events, however, seem to have jarred them awake. To avoid any chance of reprisal, I choose to anonymously dress down the trolls and expose their argument as laughably invalid for the following reasons:

First off, with respect to a CAP member who is illegally making and selling fully automatic weapons or who is taking off duty shots at the President,the outing of his professional, political and social memberships will be required to find the sources of influence for his radicalization. Having this data allows the American taxpayer to confirm or reject accusations that pockets of Civil Air Patrol have been co-opted to groom and indoctrinate young teens into false, extremist political views and/or risky sexual behavior. That data series baby is only just starting to breach out of Auxbeacon with stories on anti-social and political behavior from Lee Harvey Oswald, David Ferrie, Barry Seal, David Graham, Diane Zamora, Jeffrey Klotz, Scott Lombardi, Alger Conger, Nicholas Robey, Jeffery Carter, David Grover, Jonathan Holder, David Greenberg, Kristian Ward, AC Winward, Ryan Mantz, Mark Nolan, etc.  Some of this more extreme anti-social behavior could be shaped and prompted by the drumbeat of political memes from men like Larry Julian or Jim Kalletta.   If Civil Air Patrol cadets understood how many names have been omitted from the short list, they would be ashamed. 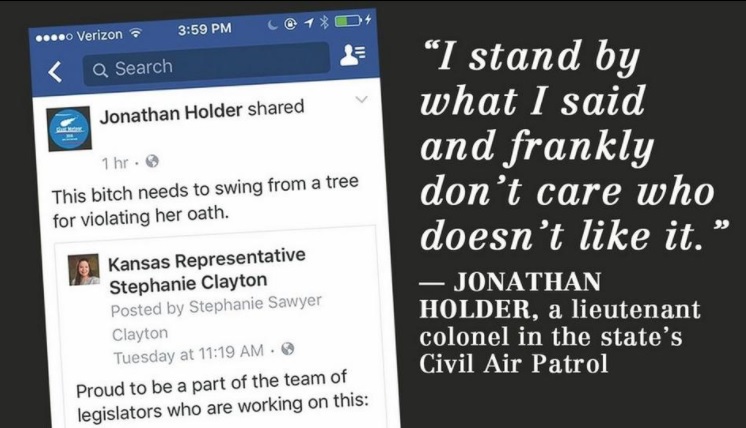 One of the members of that short list of shame is still permitted to mold cadet minds. Yesterday, under the moniker “Red Allen,” Civil Air Patrol’s not-yet-forgotten “Swing From A Tree” Kansas gun-advocate made his pitch in defense of CAP Major Mark Norton by attacking the media and anyone contributing to Auxbeacon. If you don’t have access, his exact words were:

“Coverup? NHQ didn’t direct him to do this and to suggest CAP is somehow responsible for the actions of individual members outside of CAP is the kind of ridiculous crap Auxbeacon spews.”

Poor Red. He either doesn’t comprehend what he is reading or he’s disingenuously distracting the cadet audience away from the facts. Neither possibility reflects well on the CAP Corporation that had once appointed him as commander of the 77th Composite Squadron in Empora.  With regard to attempted cover-ups, the truth is that Civil Air Patrol commanders, PAOs and attorneys do attempt to keep Civil Air Patrol’s name out of embarrassing stories and have worked to remove negative stories from the public record. The attempt in the Deatsville Alabama Glider crash was expertly exposed by the highly respected Major Jim Matthews.

“If I were the reporter and a Wing PAO tried to convince me that a glider incident – resolved successfully and publicly – involving a cadet pilot was FOUO and that I should leave CAP out of it, after I stopped laughing I would immediately file a sidebar story about the Wing trying to suppress the details of the story.” – Jim Matthews, Commander, Virginia Wing Group 3

Kathrynsreport preserved the evidence of the now deleted Dayton Daily News article on the theft accusations against James Shaw prior to his sudden removal. Stories of Civil Air Patrol pedophiles have also disappeared. In the Learn to Lead modules, Civil Air Patrol doesn’t provide photos of Lee Harvey Oswald, David Ferrie, Barry Seal or the Texas Cadet Killers as warning examples of the risks we face in CAP from those radicalized into hateful kooks, horn-dogs or dupes. Why not? I don’t want my sons to wind up being used in this way, do you?

There is justification for the collection of data on Civil Air Patrol as a possible common denominator in right wing radicalization and/or military sex crimes. The argument is not that Civil Air Patrol National Headquarters is “directly” ordering sexual abuse, right-wing propaganda memes or the manufacture of illegal weapons as Johnny Red portrays. The valid argument, more clearly restated from above, is that Civil Air Patrol National has lost control over the volunteer warlords running squadron and group fiefdoms in the hinterlands. That control runs from the likes of Jonathan Red in Emporia, Kansas all the way up and out to Pacific Region Commander Jon Stokes. If you wish to be respected with grade and position in a military auxiliary, then you shouldn’t be pushing up against the letter of CAP’s regulations or overtly violating the spirit of the 1939 Hatch Act. We are interested in the full story that will come from the comment about General Edwin Walker pushing his Pro-Blue John Birch Society material to US soldiers who complained and had him removed. 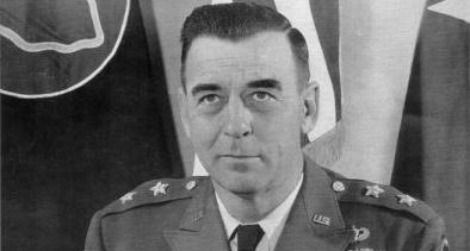 Has CAP really lost control of its appointed warlords or is it deliberate encouragement with plausible deniability? Have CAP’s leaders and their agency puppet masters calculated that a civilian auxiliary could be successful where Maj Gen Edwin Walker failed both overseas and in Dallas park restrooms?

When Civil Air Patrol’s Kansas squadron commander Jonathan Holder publicly called State Rep. Stephanie Clayton a bitch who “should swing from a tree for violating her oath” did CAP National’s commander Mark E. Smith make it clear to all members that such low-class behavior would be cause for dismissal from CAP? No, he did not. Is the perception that Geezus, Guns and Gays are too much a part of Civil Air Patrol’s base to address more than one of the three at the same time?

Some of the cadets and senior noobs understand this, but some won’t unless it is explained to them with a tour through CAP member offenses across time. There’s a story idea for you or another author.

Membership Requirements and Rationale for Termination

Second, CAP’s own membership termination regulations state that members can be removed for behavior that poorly represents the organization. Just look at the check list of handy reasons to terminate a member on a CAP Form 2B that have nothing to do with official Civil Air Patrol events or activities. If, however, you acquired [certain] photographs or audio recordings of a commander [redacted], your luck may vary. Equality in Portrayals of the CAP Corporation vs Individual Members

Third, if a CAP member appealed their membership termination, the regulation “requirements” allowed CAP to expose the name of the appealing member all across the nation in CAP News (later online within eServices). That’s one hell of a deterrent! It deliberately adds a high risk of even more public humiliation to discourage a lone individual member from going up against a clique of dirty commanders and dirty IGs to contest their termination from a tax-payer funded public service organization. One of your recent articles pointed to this.

This fact is just starting to become obvious to some members of YKYICW, and as always with bright young women leading the way.

“I know a couple male seniors like this but no one listens to me. It just gets swept under the good ole boys club rug. Smh… And no IGs don’t always listen to you. They say they look into and then believe a bold faced liar whose super good at deceiving people and being a predator and getting away with things. Predators walk this earth in all different organizations and get away with it.”

If as a cadet you studied  leadership, emergency services and aerospace history and have earned some pips or diamonds, that’s nice, but it most certainly doesn’t make you a Theoretical Physicist, Aerospace Engineer or a Head of State. CAP’s Leadership and STEM material is rudimentary and past attempts to make it more challenging are met with resistance because Civil Air Patrol is a pipeline to Lackland’s BMT, not to Jimmy Doolittle’s MIT. On average, but not always, Civil Air Patrol breeds many ignorant, snot-nosed cadets who peak in the cult of the program. 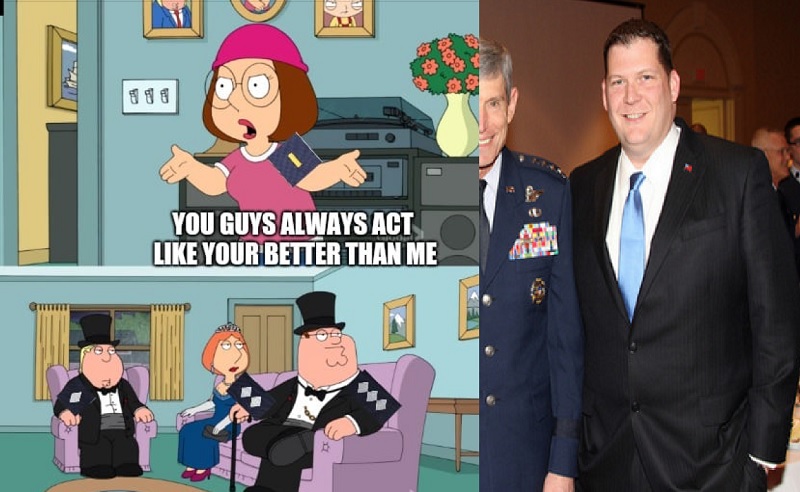 In the middle level, we have had some of the least educated and least productive people serving as squadron and group commanders.

“For longevity, it’s not what you know. Rather it is who you know and how you kiss their ass that matters most.”

With leadership guidance of this quality, it is no wonder that the United States is urgently playing catch-up in STEM: Science, Technology, Engineering, and Mathematics.

In higher society, Civil Air Patrol’s desperation to crawl into bed with budget approving politicians across all US states has led to some absolutely horrendous inductions. Civil Air Patrol’s Lt Col Don Rogers had some taxing safety problems. Recently, many state politicians inducted into Civil Air Patrol’s Legislative Squadron came to believe that they were somehow above the law when it came to speeding and driving under the influence. Yet any CAP Van driver who ferries cadets at Encampments or National Cadet Special Activities would have been required to provide a 3-5 year driving record of their outside-of-CAP behavior from the local department of motor vehicles in order to be approved for a CAPF 75.  Your behavior outside of Civil Air Patrol is not irrelevant. 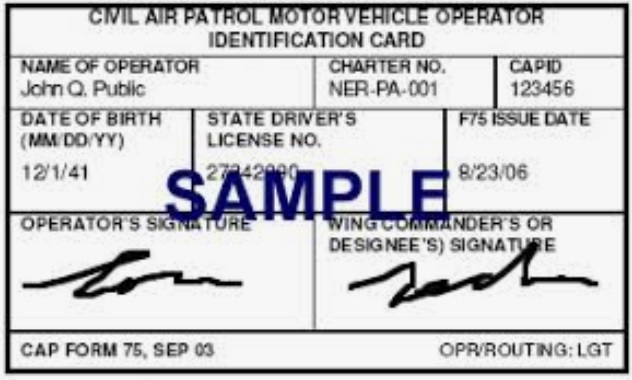 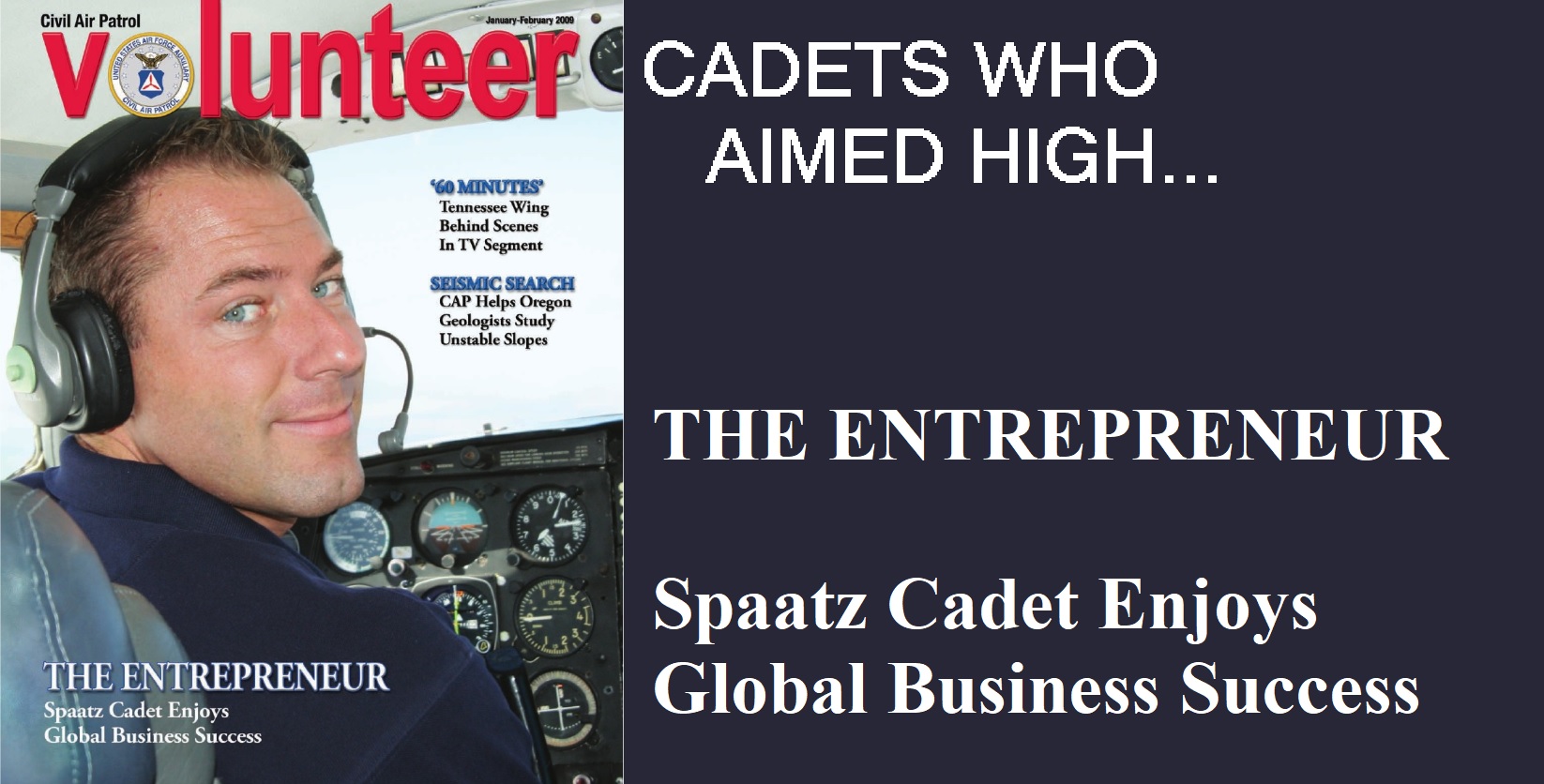 While some members of the social media group YKYICW are waking up to call for change, there are other voices inviting those members to CAPF 2B themselves in voluntary termination of their memberships.

There isn’t a way to report things anonymously, and the potential for retaliation/reprisal and
conflicts of interest are very high. 60-2 states to go through the chain of command. What if the chain of command is part of the problem? There’s a lot of good things about CAP but the reporting process is deeply flawed. – Andrew V.

“You guys do know we have a regulation on how to deal with this, right? Don’t like it? The same site that has the reg has a CAPF 2B.” – Dan S.

Fortunately, the tide has turned and fewer are being intimidated by these tones.

“The system for reporting CAP fraud, waste, and abuse is wholly ineffective and never ends well for the whistleblower.” – Andrew V.

In case you don’t have access, everything is included in the pdf that I have provided at this link:

In conclusion, please help us to warn cadets that they appear as future targets of opportunity for abusers when they suggest that journalists should not report the association of an arrested Civil Air Patrol member with our program. This is especially true when some of these crimes may have been motivated by grooming and brainwashing learned from other members with unofficial, but tacitly approved influence.