Virginians go to the polls again this November 5th, and all 140 seats in the General Assembly are up for grabs. Earlier this year I provided information about former Civil Air Patrol National Commander and Virginia Delegate Richard L. (Rich) Anderson, who lost his seat in 2017 after going dirty against his ethically and intellectually superior opposition, Hala Ayala. 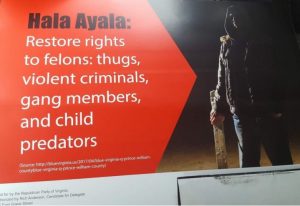 Rich Anderson, a former Spaatz cadet and Air Force missile officer, served as Civil Air Patrol National Commander from August 1993 until August 1996. After that, he held sufficient influence to bring in a successive line of national commander replacements who turned out to be highly public national embarrassments:

• Paul M. Bergman 1996-1998 | Southeast Region Cruise scandal and forced out because of a sex scandal at NHQ.

• Richard Bowling 2000-2004 | NASCAR scam, attempted to make CAP to be for-profit and other scandals.

• Dwight Wheless 2004-2005 | Jayson Altieri‘s father-in-law forced out because of a sex scandal at NHQ. Both parties had been counseled.

Once Richard L. Anderson took office in the Virginia House of Delegates in January 2010, he was then tapped to become chairman of the Civil Air Patrol Board of Governors and held that position from February 2011 until February 2013. His influence over Civil Air Patrol only waned after his 2017 loss and the installation of former Air Force F-15 pilot Mark E. Smith as our latest national commander.

Anyone with seniority beyond the revolving door of Civil Air Patrol will attest that Rich Anderson has been a poor leader both in the spotlight and behind the scenes for Civil Air Patrol. It doesn’t end there, however.

Anderson’s performance as a Virginia delegate is comparable to his poor record with Civil Air Patrol. In that role, he pandered to the most ignorant and backward influences in the region. He’s an A-rating tool of the National Rifle Association and those fundamentalist males who believe they have a right to block a woman’s choice and access to contraception and abortion. He has never stood up to become a leader working to correct the state and national educational failures that have stunted the mental growth of his backward voter base, to include those breeding in Civil Air Patrol. He hasn’t done the work to understand the world around him and he is continuing to block others from achieving that understanding.

What I’ve written above is based on my personal experience in Civil Air Patrol over several decades. While many CAP people most certainly FEAR writing about Anderson openly, I wondered if anyone not affiliated with CAP might have acquired a similar view. I found support in this article:

Rich Anderson is like a zombie coming back from the dead