By Howard Altman | The Tampa Tribune

ORLANDO – Stephen Governale had been a Lieutenant Colonel in the Air Force Reserve, a protocol officer at U.S. Central Command and a leader of a National aviation cadet program before his arrest in September.

On Tuesday morning, he was a defendant wearing a maroon Seminole County Jail jumpsuit, pleading guilty in Orlando federal court to a charge that he tried to entice a teen to have sex. Governale, 49, is now a convicted sex offender facing at least 10 years in federal prison without parole.

Other potential victims — boys he had contact with through the Civil Air Patrol cadet program — were uncovered in the wake of Governale’s arrest. But under his plea deal with the U.S. Attorney’s Office, Governale will face no more charges in connection with the case.
Organizations supporting victims of military sexual trauma say they would like to see further investigation because they think that too often those in positions of power violate their trust by engaging in sexual activities with subordinates.

Brian Purchia, spokesman for Protect our Defenders, said there should be additional investigation into Governale’s relations with the other young men he met through the Civil Air Patrol, an auxiliary of the Air Force.

“Over the years the leader of the National Cadet Program had access to hundreds if not thousands of cadets,” Purchia said. “We must get to the bottom of it. Anything less is unacceptable.”

For now, though, Governale’s path is set.

He must register as a sex offender and forfeit the computer and cellphone he used to communicate with a 17-year-old from the Orlando area, according to the plea agreement he reached with prosecutors. He may have to make restitution to the victim, as well, when he returns to court for sentencing June 13.

Because parole has been eliminated, Governale will likely have to serve the entire penalty. He will have supervised release for at least five years afterward and he faces a fine of $250,000, according to the plea agreement.

As Governale quietly admitted his guilt before U.S. District Judge Anne Conway on Tuesday, his wife, Terry Governale, sat on a bench in the courtroom with a family friend. She declined to answer questions before or after the plea.

In an interview with the Tribune last year, she called her husband “the kindest, most sincere, wonderful human being you could ever meet.”

An active member of the reserve since 1997, and Lieutenant Colonel since 2006, Governale had earned accolades for his work.

He was named one of two Centcom civilian employees of the year in 2010. He served for a decade as co-director of the Civil Air Patrol’s Cadet Officer School, a 10-day program where cadets from across the United States gather at Maxwell AFB in Alabama.

Investigators say it was through the Civil Air Patrol program that he met the teen and other young men with whom he may have had sexual contact. The Civil Air Patrol offers educational programs nationally to nearly 27,000 youths ages 12 to 20.

Governale was arrested Sept. 21 for using the Internet to entice a teen from Seminole County to meet him for sex, the FBI said. Investigators say they found evidence of “many, many” sexually explicit conversations with young men on his cellphone. 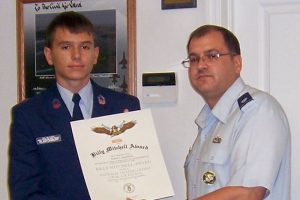 On Sept. 11, the parents of the teen said, they saw sexually explicit conversations between Governale and their son on Facebook, according to investigators.

The parents contacted the FBI, and the teen told agents that he met Governale in 2009, according to a complaint. The teen said that he went on two trips with Governale, stayed in the same bed with him, watched pornographic movies in the hotel and engaged in a “contest” in which they touched each other sexually, according to the complaint.

Pretending to be the teen, an agent from the FBI Innocent Images Task Force engaged in sexually explicit Facebook chats with Governale, who agreed to meet at a Wendy’s in Orlando, according to the complaint. Instead of the teen, Governale was met by FBI agents, who arrested him.

FBI agent Rod Hyre testified at Governale’s bail hearing that the victim was a member of the Civil Air Patrol when he met Governale, according to Assistant U.S. Attorney Karen L. Gable. Hyre testified that four other young men with whom Governale is accused of having sexual contact also were members of the patrol, according to Gable.