[Editor’s Note: We received an anonymous tip regarding this crash. Thank you for your contribution. This CAP plane crash in Nevada was attributed to pilot error.]

Thursday night, November 8, 2007, the Civil Air Patrol lost two volunteers and leaders of the search for Steve Fossett when their single-engine CAP Cessna 182 Skylane (N881CP) crashed into Mount Potosi southwest of Las Vegas The plane was a new turbocharged T182T NAV III that the Nevada Wing had received in April of this year. The Nevada Wing had put more than 300 hours on the plane. The Cessna disappeared from radar about 7:15 pm according to the FAA. The crash was estimated to be about 1,300 feet from the top of the 8,514 foot tall Mount Potosi, according to the National Transportation Safety Board preliminary report.

The glass cockpit Cessna 182 was destroyed by fire. Killed were the Nevada Wing Commander of the Civil Air Patrol, Colonel Dion E. DeCamp and the Pacific Region Director of Operations and a former national vice commander, Colonel Edwin W. Lewis Jr. Colonel Lewis had over 28,000 hours as a pilot while Colonel DeCamp had over 27,000 hours. This is the second fatal aircraft accident for the CAP in the last three months.

The CAP Cessna 182 that was lost last Thursday disappeared from radar at about 7:15 pm. Could a moonless night have contributed to this accident? Perhaps it was the glass cockpit. 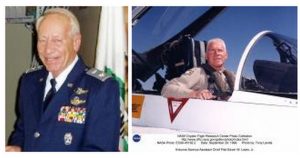 On November 8, 2007, about 19:18 Pacific standard time, a Cessna T182T, N881CP, was destroyed after impacting mountainous terrain during climb to cruise near Potosi Mountain, about 13 nautical miles southwest of Las Vegas, Nevada. The airplane was registered to the Civil Air Patrol, Maxwell Air Force Base, Montgomery, Alabama. The left-seat first pilot and right-seat second pilot, both of whom possessed airline transport pilot certificates, were killed. Visual meteorological dark night conditions prevailed for the 14 Code of Federal Regulations (CFR) Part 91 personal cross-country flight, and a visual flight rules (VFR) flight plan had been filed and activated at the time of the accident. The flight departed the North Las Vegas Airport (VGT), Las Vegas, Nevada, about 19:05, and was destined for the Rosamond Skypark (L00), Rosamond, California.

At 18:22 the pilot of N881CP filed a VFR flight plan from VGT to L00 and stated that he did not need a weather briefing. Air Traffic Control recorded the flight as CAP Flight 2793.

The Federal Aviation Administration’s (FAA) recorded data indicates that after departing VGT on Runway 30L, the airplane turned to a southwesterly heading.

At 19:06:05, the controller asked the pilot to verify his destination. The pilot replied, “We’re going, ah, to Rosamond, California.” The controller replied, “CAP Flight twenty-seven ninety-three, roger.” At this time the airplane’s altitude was 2,800 feet mean sea level (msl).

At 19:07:42, the pilot radioed to the controller, “And CAP Flight twenty-seven ninety-three, we would like to leave frequency for a minute to open a flight plan.” The controller granted the pilot’s request and asked him to confirm that he still had the helicopter in sight. The pilot replied, “That’s affirmative.” The controller replied, “CAP Flight, ah, twenty-seven ninety-three, roger. Maintain visual separation, and, ah, approved as requested.” The pilot replied, “Alright.” The airplane’s altitude was 3,500 feet msl.

At 19:08:25 and 19:08:40 the pilot attempted to contact Reno radio to open his flight plan; the flight service station (FSS) specialist reported that both transmissions were unintelligible. At this time the airplane’s altitude was about 3,600 feet msl.

At 19:11:55, the controller asked the pilot, “CAP Flight twenty-seven ninety-three, what’s your requested on course heading, and how high you want to go?” The pilot responded, “We would like, ah, ten point five, and we are at two one zero.” The airplane’s altitude was 4,800 feet msl.

At 19:17:29 radar contact was lost. There was no further radio communication received from the flight. The last recorded altitude was 7,000 feet msl.

A local law enforcement officer/pilot, who was assigned to the Las Vegas Metropolitan Police Department’s Air Support/Search and Rescue Unit, reported that on the evening of the accident, while flying a helicopter patrol mission and heading in a south-southwest direction, he observed a large fireball/explosion in the vicinity of Mount Potosi, elevation 8,514 feet msl. The officer stated that his partner also observed and confirmed that it was an explosion. The officer reported that while en route to the area of the fire he observed additional fireballs, and upon arriving at the accident site his partner confirmed that the fire was the result of an airplane crash. One officer described the area as void of any lighting which would aid in the illumination of terrain.

On November 10, 2007, onsite documentation of the accident site revealed that the airplane had impacted a near vertical rock face on the southeast side of Mount Potosi, about 1,000 feet below its summit. A survey of the accident site revealed that all airplane components necessary for flight were identified. One propeller blade was not accounted for during the initial onsite examination, nor during the recovery phase of the wreckage.

On November 13, 2007, the airplane was recovered to a secured storage facility for further examination by parties to the investigation.

The left-seat first pilot, age 73, possessed an FAA airline transport pilot certificate for airplane multiengine land and commercial privileges for airplane single-engine land. The pilot also possessed multiple airline transport category type ratings, a turbojet flight engineer rating, as well as flight navigator certification. It was reported by Civil Air Patrol personnel that the pilot had accumulated a total flight time of 25,000 hours. The pilot’s personal logbooks were not accounted for during the investigation.

The pilot held a second-class FAA airman’s medical certificate, which was issued on September 10, 2007, with the limitation “Must have available glasses for near vision.”

The pilot had been the CAP’s Nevada Wing Commander since 2003. According to a flight log provided by the Nevada Wing of the CAP, the pilot had accumulated 74.7 hours in Garmin 1000 (G1000) equipped Cessna airplanes, and 34.2 hours in the accident airplane. The pilot had received G1000 training from a CAP instructor; the instructor was factory trained at the Cessna training facility in Independence, Missouri. The pilot’s training was conducted in accordance with the Cessna FAA/Industry Training Standards (FITS) training program. The curriculum included 3 ground school sessions of 4 hours each, and three training flights of 2 hours each.

The pilot possessed a first-class FAA airman’s medical certificate, which was issued on May 25, 2007, with the limitation “Must wear corrective lenses.”

Civil Air Patrol personnel reported that the pilot had served in the CAP for more than 50 years. At the time of the accident the pilot was the Director of Operations for the CAP’s Pacific Region. The pilot was also the former National Vice Commander, serving in the capacity for one year before serving as the Pacific Region commander for four years. Additionally, the pilot had held the position as the California Wing Commander. It was further reported by CAP personnel that the pilot had not been trained in CAP G1000 equipped airplanes, and was not authorized to fly G1000 equipped CAP airplanes.

The 2006-model Cessna T182T airplane underwent its most recent annual inspection on September 7, 2007, at a total time on the airframe and engine of 300.8 hours. The airplane’s most recent tachometer reading was recorded on November 7, 2007, at a total time of 338.7 hours. There was no record of the airplane having been involved in any previous airplane accidents.

The turbocharged, autopilot-equipped airplane was equipped with a Garmin G1000 Integrated Cockpit System. The system incorporates a Primary Flight Display (PFD) and a Multi Function Display (MFD). The MFD allows the pilot to access the Terrain Proximity Page, which provides the pilot with terrain elevation relative to the airplane’s altitude, current aircraft location, range marking rings, a heading box, and obstacles. The Terrain Avoidance and Warning System (TAWS) option was not installed on the airplane.

A National Transportation Safety Board Air Traffic Control Investigator reviewed the radar data for the accident flight. The investigator reported that radar data for this accident was obtained from the LAS Airport Surveillance Radar-9 (ASR-9) sensor as recorded by the Las Vegas Terminal Radar Approach Control (L30) Standard Terminal Automation Replacement System (STARS), which indicated that Cap Flight 2793 was continuously visible from departure at VGT until impact with Mt. Potosi. The radar also displayed an image of the symbol depicting Mt. Potosi as Cap Flight 2793 approached the obstacle just prior to the accident.

FAA Order 7110.65 states, in part, that a controller’s duty priority is to “give first priority to separating aircraft and issuing safety alerts…” The safety alert is to be issued to an aircraft once the controller observes and recognizes a situation wherein the aircraft is in unsafe proximity to terrain, obstacles, or other aircraft. The controller “…must remain vigilant for such situations.”

According to the U.S. Naval Observatory, Department of Astronomical Applications, the phase of the moon was waning crescent (not seen anytime before midnight) with 1% of the moon’s visible disk illuminated. Moonrise was at 0605 on the following day.

On November 10, 2007, the NTSB IIC, accompanied by representatives from the FAA, United States Air Force, and Cessna Aircraft Company examined the wreckage at the accident site. The examination revealed that the airplane had impacted rapidly rising terrain nose first in an approximate level flight attitude, about 21 nautical miles southwest of VGT, elevation 2,205 feet msl. The impact site was located about .6 miles southeast of the summit of Mount Potosi, elevation 8,514 feet msl. The airplane had impacted the terrain on a magnetic heading of about 210 degrees, subsequently falling about 30 feet before coming to rest on a rock outcropping at an elevation of about 7,450 feet msl. A large burn mark above the outcropping was consistent with the airplane’s initial impact point.

An autopsy was performed on each pilot by the Clark Country Coroner’s Office, Las Vegas, Nevada. According to the autopsy reports, the cause of death for both pilots was “Multiple blunt force trauma.”

A postaccident examination of the airframe’s structure and engine failed to reveal any preimpact failures or malfunctions, which would have precluded normal operation.

An examination of the airplane’s avionics components revealed that they were too thermally and impact-damaged to provide any data.

Radar data for the last 6 minutes of flight, during which the flight was clear of class B airspace and cleared to climb to its cruise altitude of 10,500 feet msl, indicated that the airplane’s average groundspeed was 100 knots, its average rate of climb was 406 feet per minute (fpm), and its average magnetic heading was 222 degrees. Based on this information, a calculated rate of climb of 596 fpm would have been required to have safely cleared the terrain along the flight’s path.

The circular defines CFIT as a situation which “…occurs when an airworthy aircraft is flown under the control of a qualified pilot, into terrain (water or obstacles) with inadequate awareness on the part of the pilot of the impending collision.”

According to the CFIT circular, “situational awareness” is defined as “…when the pilot is aware of what is happening around the pilot’s aircraft at all times in both the vertical and horizontal plane. This includes the ability to project the near term status and position of the aircraft in relation to other aircraft, terrain, and other potential hazards.”