[Editor’s Note: We received an anonymous tip regarding this crash. Thank you for your contribution. This plane crash in Mississippi was attributed to pilot error.]

The Piper A-32 the three men were flying in crashed in a residential area shortly after takeoff about 5:10 p.m. from Hawkins Field Airport, according to authorities. The plane wasn’t part of CAP’s fleet, and the men weren’t on a CAP mission; they were headed to a Federal Aviation Administration safety meeting in Raymond, MS, about 30 miles away.

“The CAP family is deeply saddened by this tremendous loss,” said Col Carlton Sumner, Mississippi Wing commander. “These fine men served selflessly in the military and/or in CAP. Their legacy will be marked by tireless service, devotion to duty and with great personal integrity and character. They touched innumerable lives as friends, business associates, mentors, instructors and leaders.”

“My condolences go out to the families of these great Americans,” Sumner said. “May their families know their service to the members of their respective communities as Civil Air Patrol volunteers was greatly appreciated and was in keeping with the highest traditions of the organization.”

Maj Gen Chuck Carr, CAP national commander, cited the “tremendous loss suffered by Civil Air Patrol.” In a message to the organization’s 11,000 members nationwide, he said, “Each of us in the CAP family is shocked and saddened by this loss, and I ask that you keep the victims, their families and friends in your thoughts and prayers during this very difficult time.”

Tilton, who joined CAP in February 1998, was 65. He had served as the Mississippi Wing’s safety officer since June 2011. His wife, Col Rebecca Tilton, is the wing’s government relations adviser.

Tilton served as Alabama Wing commander from April 2002-February 2006 and as Southeast Region commander from February-October 2006, then as national safety officer from October 2006-December 2007. He served as an at-large member of CAP’s Board of Governors from August 2007-November 2009.

He was an experienced aviator, having flown as a helicopter pilot in the U.S. Army, where he retired as a lieutenant colonel and held FAA qualifications as a certified flight instructor.

His aviation credentials included military service as an Air Force F-101 fighter pilot, and he held FAA qualifications as a certified flight instructor.

Young joined CAP in May 2011. He was 78. His aviation credentials also included qualifications as an FAA certified flight instructor. 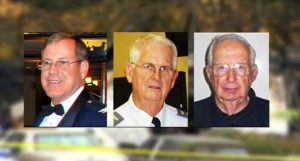 Probable Cause and Findings:

On November 13, 2012, about 1715 central standard time, a Piper PA-32-300, N717RL, was substantially damaged when it impacted a house in Jackson, Mississippi. The airline transport pilot (ATP) and the two pilot-rated passengers were fatally injured. Visual meteorological conditions prevailed, and no flight plan was filed for the flight, from Hawkins Field (HKS), Jackson, Mississippi, to John Bell Williams Airport (JVW), Raymond, Mississippi. The personal flight was conducted under the provisions of 14 Code of Federal Regulations Part 91.

The National Transportation Safety Board determines the probable cause(s) of this accident to be:
The pilot’s inadequate preflight inspection, which resulted in his failure to note the water in the fuel tank due to condensation, which subsequently shut down the engine in flight. Contributing to the accident was the pilot’s self-induced pressure to expedite the departure.