[Editor’s Note: We received an anonymous tip regarding this crash. Thank you for your contribution. This CAP plane crash in California was attributed to pilot error.]

While searching for a downed flier in the snow-covered wilderness of the Angeles National Forest on Saturday, the Civil Air Patrol lost a crew in an accident just as sudden and tragic as the hundreds of aircraft crashes it searches for every year.

The unpaid civilian volunteers of this search-and-rescue arm of the Air Force fly in the most dangerous of circumstances–low, slow and typically over treacherous mountains in threatening weather.

On Saturday, that combination turned deadly as a Cessna 182 carrying pilot Robert A. Leman and observers Brian Perkin and James C. Spadafore, crashed on the rugged slopes of Mt. Baldy, killing all aboard.

Worsening weather forced the CAP aircraft out of the air, and on Sunday morning the Sheriff’s Department located the wreck. And as the harsh weekend weather cleared to blue skies Monday, officials were able to remove the bodies. Just why the plane crashed is still under investigation.

It’s been 12 years and thousands of missions since the Civil Air Patrol lost one of its crews in an air crash, and members of this quasi-military unit are taking the loss of the three members hard.
“We never expect this,” said Patrol Chaplain Dan Dyer. “It’s like losing part of your family.”

In the search-and-rescue trade, you deal with someone’s tragedy on just about every mission, added Col Sydney Wolfe. “But it’s not normally our own,” said Wolfe, based in San Jose where the ill-fated flight originated. “A lot of us are in shock, disbelief. We just don’t understand it.” 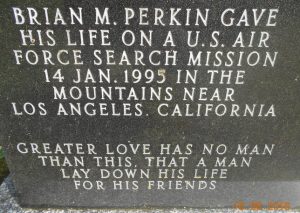 A CIVIL AIR PATROL (CAP) CREW WAS CONDUCTING A SEARCH AND RESCUE MISSION IN MOUNTAINOUS TERRAIN. AFTER 40 MINUTES OF FLIGHT TIME, THE PILOT REPORTED ‘OPS NORMAL’ TO CAP OPERATIONS. ANOTHER AIRCRAFT, WHICH WAS CONDUCTING A GRID SEARCH IN AN ADJACENT AREA, REPORTED HEARING AN ELT SIGNAL 25 MINUTES LATER. REPEATED ATTEMPTS TO CONTACT THE ACCIDENT AIRCRAFT BY RADIO WERE UNSUCCESSFUL. LOCALIZED WEATHER CONDITIONS WITH STRONG WINDS, DOWNDRAFTS, AND TURBULENCE WERE NOTED BY OTHER SEARCH AIRCRAFT AND PILOT WITNESSES FLYING IN THE AREA AT THE TIME. THE AIRCRAFT IMPACTED NEAR THE CREST OF A RIDGE AND WAS FOUND ORIENTED VERTICALLY TO THE HORIZON. EXTENSIVE AND FULL SPAN REARWARD LEADING EDGE CRUSH DEFORMATION WAS OBSERVED ON BOTH WINGS. NO AIRFRAME OR ENGINE DISCREPANCIES WERE FOUND DURING THE INVESTIGATION.

The National Transportation Safety Board determines the probable cause(s) of this accident to be:
the pilot’s loss of aircraft control and subsequent inadvertent stall/spin following an encounter with a localized mountain wave condition and turbulence while conducting a search mission in close proximity to mountainous terrain.

On January 14, 1995, at 1136 Pacific standard time, a Cessna 182R, N9706E, was destroyed by ground impact in mountainous terrain while maneuvering near Wrightwood, California. The aircraft was owned and operated by the Civil Air Patrol (CAP) and was on a search and rescue (SAR) mission as a public use aircraft. Visual meteorological conditions were prevalent at the time and a composite VFR/IFR flight plan had been filed for the operation. The certificated commercial pilot, his observer, and scanner sustained fatal injuries. The flight originated from Cable Airport, Upland, California, at 1029 on the day of the accident.

The crew was conducting a search and rescue (SAR) as assigned by the California Wing of the CAP. CAP operations conducted a mission briefing for three SAR aircraft and made grid assignments in the search area. All three aircraft departed IFR, and after breaking out in VFR conditions, initiated searches in their assigned areas. At 1111, the pilot reported “ops normal” to CAP operations. Another CAP aircraft, which was conducting a grid search in an area adjacent to and west of the accident site, reported hearing an emergency locator transmitter (ELT) signal at 1136. The CAP reported that the minimum altitude for conducting searches is 500 feet agl.

The pilot was a CAP trained and qualified search and rescue pilot. He received his initial check flight on September 10, 1983. A review of his training records showed he had received satisfactory entries including “mountainous terrain procedures,” such as “wind/updrafts/downdrafts” and “mountain wave effects” in his CAP training records. He attended a CAP “mountain clinic” on May 18-19, 1990. His last check flight was conducted on April 4, 1994, and he was rated as “mountainous terrain qualified.”

All three occupants of the aircraft were certified pilots. On this mission pilot duties were limited to the PIC.

The aircraft forms and records were reviewed by investigators with no discrepancies noted. The aircraft was equipped with fully functioning dual controls.

The pilot was given a verbal weather briefing by the CAP operations officer based on weather obtained through a direct user channel access terminal (DUAT). Localized weather conditions including downdrafts and turbulence in the vicinity of mountainous terrain were noted by witnesses flying near the accident location.

Two CAP aircraft were searching on grids adjacent to the east and west of the grid occupied by the accident aircraft.

On January 15, 1995, the aircraft was found by aerial search personnel at the 7,700 foot level of the Angeles National Forest, at latitude 34 degrees 18.46 minutes and longitude 117 degrees 39.09 minutes, in an area covered by 80-foot pine trees. The site was near the crest of a ridge on terrain that sloped downward between 45 and 60 degrees. The ground was frozen and covered with about 1-foot of snow and ice. The final position of the aircraft was approximately 4 feet down slope from a visible ground scar. Tree limbs were found within 10 to 15 feet of the wreckage and exhibited evidence of fresh breaks. The terrain at the impact site was rocky and rescuers stated they believed they saw evidence on the ground of a fuel spill in the immediate vicinity of the aircraft.

The aircraft’s final position was nose down with the main wings nearly perpendicular to the terrain. The nose was crushed rearward aft of the leading edge of the main wings. Both main wings exhibited extensive crushing along the leading edges extending from wing tip to wing tip. The was no discernible bending or twisting evident with either wing.

The fuselage was collapsed and was found in a near vertical position. The empennage had collapsed and rotated forward over the top of the main wings.

The flight control surfaces were in place; however, the associated control cables were either broken or loose. The instrument panel was destroyed and prevented the establishment of instrument readings and settings, as well as switch positions.

Rescue personnel reported that the No. 2 blade of the propeller had separated and was located several feet from the aircraft. The blade was not found again after the recovery process was completed. The No. 1 blade came out of the hub during the removal of the propeller from the crankshaft. The blade was bent aft and exhibited leading and trailing edge gouges and scaring.

The propeller governor had been partially separated in an aft direction. The governor base plate exhibited impact marks corresponding to individual oil pump gear teeth.

The oil sump was crushed upwards, as was the muffler. Both exhaust manifolds exhibited some crushing. The right intake manifold was fractured and the carburetor had been pulled off. The mounting bolts were found stripped. The carburetor was found with the throttle valve in the closed position and the mixture arm in the lean position. All four engine mounts were fractured. The oil filter, starter, alternator, vacuum pump, and both magnetos had separated and were missing. The rocker covers for No. 1, 2, and 5 were crushed and breached. The crankshaft was displaced rearward into the case and could not be rotated.

According to the Continental Motors representative, no pre-impact discrepancies were noted during the inspection of the engine.