The Case of the Hot Yoga Pants and Hover-parent Bully was posted on Reddit almost a week ago now so that you [and your readers] can verify it and the responses that came in. I strongly disagree with one suggestion that the Civil Air Patrol cadet needed to transfer and that it “is all over now” or that “there is nothing more to be done.” Just as with sexual harassment, this kind of weasely abuse from scumbag, self-entitled officers that have crawled up through our Air Force needs to stop. Because of this, and your earlier reports on nepotism with Jayson Altieri, I am giving you the names of the two Air Force officers / Senior Members who were involved. I am not one of the cadets that suffered through this so [redacted] and [redacted] should not do anything to them in retaliation.

On August 16th a low ranking 8th grader cadet who graduated from encampment arrived at our PT wearing yoga pants and her shirt in a knot. This was still in the warmer months in the year, and I personally didn’t care that much about it as the First Sergeant, but my Cadet Commander did. He told me to speak to her, so I pulled her aside in another room and calmly explained to her how she was dressed inappropriately for a Civil Air Patrol meeting, and that she needed to undo her shirt knot and bring a pair of shorts next time. She asked if she could go into the bathroom to undo her knot, I was confused but allowed her anyways. She immediately started crying, I then returned back to my previous task of teaching drill after the PT testing.

She came out of the bathroom after about 15 minutes, and told her father about how I had “hazed” her, her father being a CAP senior member and Air Force Lt Col, told another senior member. This Senior Member is also in the Air Force and is a Major. The Major pulled me into another room, without another senior member present, and asked me point blank “What the FUK did you say to her?” I replied that I had talked to her about her PT uniform and that it was inappropriate to have a shirt knot and yoga pants. He questioned whether I had ever read the regulations, or checked them before I talked to her. I told him I had read the regulations, but wasn’t able to consult them before I spoke to her, and that I didn’t care about her outfit and that I was ordered by my superior cadet officer. He replied that since I was an SNCO I’m able to think and talk back to officers, and that this isn’t the Army where you just follow orders. He made this comment because I’m also in Army JROTC.

After he chewed me out and made more patronizing comments for 5 to 10 minutes, I asked if I should apologize to the cadet, and he said yes. I resumed my task of teaching drill once again, I waited until after commander’s call to make my apology to the cadet. I tried to get her attention but she was still crying in her father’s arms, I stated her name a couple times to try to get her attention. The Major who wanted to witness my apology said aloud “Cadet *^&?$ you are being rude, ask her for her permission.” After I did that embarrassingly, I finally gained her attention and apologized, two other senior members were spectating in addition, and had also been making comments.

After this event, I decided to just quietly transfer squadrons, and did just that. There had been other reasons for my transfer, but this was the big push. I didn’t report this event at the time, because I just wanted to move past the whole ordeal. After all this time apparently the cadet thinks that I hazed her, and her father also made a rude statement. When I was volunteering at the Aviation Nation this year, my friend managed to find the cadet and her father in the crowd. When she was making chit chat with them, I was brought up and she told me the father said that I lacked human decency…

I can’t thank all of you enough for providing me guidance, and telling me about the ways I can report this. I most likely will have a meeting with my current squadron commander, since she has already heard the story, and would provide me with the best route to take on this. Thank you all once again!

Sounds like YOU were the one being hazed Sgt. I’m sorry that happened to you. The bottom line is what you did was correct. She was out of uniform and you confronted her. You would have done the same for any other cadet on any other night.

…I’m glad to hear you transferred squadrons. I hope this answer doesn’t disappoint you but it’s over now and you are going to have to try and let it go. You did what you thought was best and there is nothing more to be done.

Absolutely everything else aside, the Maj royally f*cked up by taking you into another room without a 3rd cadet or SM. Wayyy against cadet protection and they should have known better. Its drilled into your head as a SM or cadet over 18 years old so theres no excuse for what they did

1) Document. Write yourself a note, a memorandum, whatever, detailing what happened in a very clear and dispassionate way. That way, 6 months from now, when you’re getting crap from someone about “that thing that happened like 6 months ago” you can say “you mean on 16 August when I corrected a cadet for coming to PT not in PT uniform?” (because thats what this is).

Or “You mean on August 16th, when Maj XYZ pulled me into a room, swore at me and accused me of embarrassing a cadet by performing an on-the-spot correction?”

Or even “Sir, I have to report a violation of the Cadet Protection Policy. On August 16th, Maj XYZ pulled me into a room, swore at me and accused me of embarrassing a cadet. There were no other seniors present and this was not a ‘semi-private discussion’ as defined in the cadet protection policy.” 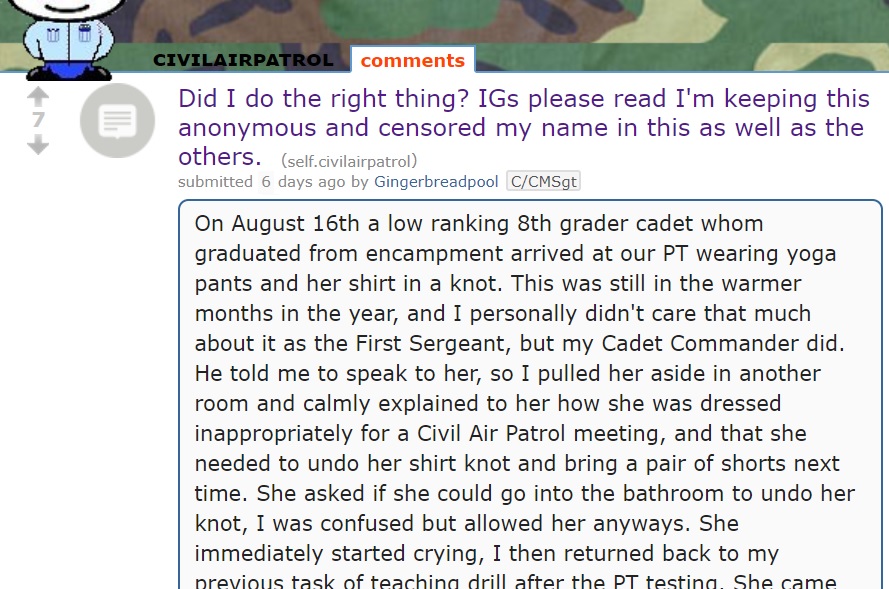 AuxBeacon Reader: These events, including the report, place the hilarious social chain of command, both CAP’s and USAF’s, on full display with the Cadet Commander and the Light Colonel slyly having others engage in the risky conflict while the cadet manipulatrix sits Queening atop all of them in a pair of tight yoga pants. How stupid are they?