Since 2011, saw the largest increase from the previous year, with 49 reports, including 27 unrestricted and 22 restricted, almost double he 25 reports in school year 2013-14.

Pentagon officials say the increase actually has a positive aspect in that it represents a “growing trust in the system” to handle complaints appropriately, and reflects a concerted effort by the military schools to reduce harassment, promote prevention and improve response.

The report noted that the Air Force Academy’s numbers for the most recent year are more in line with reports in previous years and the lower number for school year 2013-14 may have been an anomaly. 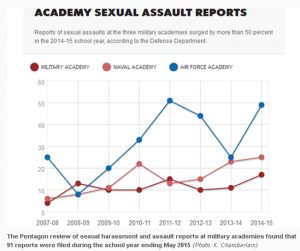 Reports of sexual harassment also have increased, with the academies receiving 28 complaints in academic year 2014-15, up from 20 the previous year. Those included 11 formal complaints and 17 informal complaints.

Officials said the academies need to improve emphasis on sexual harassment training, adding that their efforts fall short of their sexual assault prevention and response programs.

Women continue to make up the majority of those filing reports of sexual assault at the academies, but 12 percent of the assault reports at West Point were filed by men, along with 16 percent of the reports at the Naval Academy and 10 percent at the Air Force Academy.

Authors of the “Annual Report of Sexual Harassment and Violence at the U.S. Service Academies” made several recommendations for improvement, to include enhancing character development through academic, athletic and training programs, as well as improving metrics for measuring program progress.

They added that the academies have exceeded White House recommendations for reducing on-campus sexual assault.

“The service academies have the opportunity to set national standards for collegiate programs to address sexual harassment and sexual assault,” the report said.

Be first to comment on "Sexual Assault Soars at U.S. Service Academies"