[Editor’s Note: We received permission to edit and update this contribution from the original author. Thank you for helping to spell out these games for new members who will not be receiving this briefing from recruiters, commanders or gullible defenders in the forums.]

I read “Brian’s song” (comment) accusing your authors of “cherry picking” abuse and accident stories for show-and-tell on this new blog of CAP accountability. I am surprised your editors have not answered him. Brian needs to learn two sad facts about Civil Air Patrol. Permit me?

First, while there are many good volunteer pilots, rangers and educators working the missions of Civil Air Patrol for the benefit of the nation’s youth, there are also many predators and sociopaths exploiting that volunteer labor for their own economic and political advancement. Volunteer whistle-blowers of the 21st century are merely seeing for themselves what former CAP-USAF Inspector General Lt Col Stein recorded in his book.

“There are some very fine people involved in the CAP… However there were also some Wings whose people used the CAP to further their own agendas. They are supposed to instill a desire for flying in young people, which hopefully they do. However, at that time, they took advantage of their situation to raise money that was spent on lavish parties for a small group of top commanders and their wives.”

Second, Brian must come to understand how the organization’s commanders and attorney(s) have methodically turned Civil Air Patrol’s dingy public record into a wheel of imitation Swiss Cheese. The coincidental timing of events with sex offender Alger Conger and the passing of firebrand Carol Grant revealed how commanders and attorneys have erased negative stories about Civil Air Patrol people previously reported in the national funny papers. (Tip: February 26th, 2003 story from the New Hampshire Union Leader on Conger’s arrest and the November 11th, 1977 story from the Oswego Palladium showing that “Colonel” Conger was a search coordinator for Civil Air Patrol.)

Just last year in June 2017, CAPTalk revealed demands for Subunit Inspection that webmasters delete EVERYTHING on local unit websites over 6 months old. This could be an attempt to prevent CAP critics from running spider-bots building databases on Civil Air Patrol events and people. 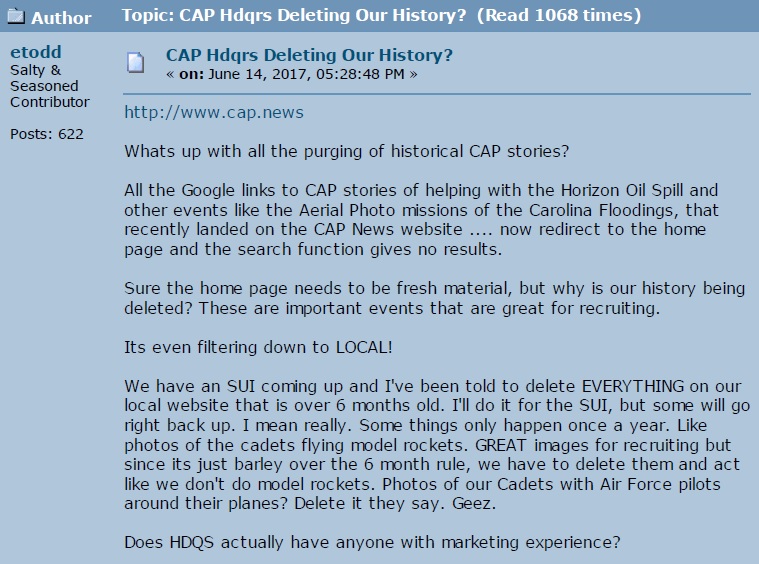 “If I were the reporter and a Wing PAO tried to convince me that a glider incident – resolved successfully and publicly – involving a cadet pilot was FOUO and that I should leave CAP out of it, after I stopped laughing I would immediately file a sidebar story about the Wing trying to suppress the details of the story.”

Soon after, in August 2017, Tex Gadget gave new life to the buried Chapter 12 of Lt Col Stein’s autobiography. Suddenly, from out of nowhere the filthy senator and his Civil Air Patrol “boy Wing Commander” became known to CAP members, parents and the general public.

“It finally came to me why the Wing Commander, a CAP colonel who was an obscure air force reserve captain, had a mobilization assignment in Washington D.C. He was the senator’s “number one boy” who was buying votes for the senator with the misappropriated air force property. I contacted my commander and explained the situation to him…. the senator was too powerful… I left with political thieves openly stealing from the air force.”

Finally, one of the most damning stories of Civil Air Patrol theft and commander corruption might have disappeared completely if not for third party efforts to cherry pick and preserve it. The story originally ran in the Dayton Daily News on August 6th, 2012

“The Civil Air Patrol, a 70-year-old nonprofit that operates as an official U.S. Air Force auxiliary and receives tens of millions of dollars in federal funding annually for search and rescue and other operations, won’t release findings of an internal investigation into allegations its historians stole donated artifacts.”

The online version ran at a link which has since been removed.
http://www.daytondailynews.com/news/news/civil-air-patrol-wont-release-findings-of-probe-of/nP9fs/

Fortunately, Newsbank, Kathyrn’s Report and AuxBeacon preserved the original story so that members and critics can access it in context.

From what I have seen from contributions here and in News of the Force, the people who were involved in the CAP Historical Foundation theft and its concealment before the Total Force announcement are still making profitable hay in other Civil Air Patrol ventures. Neither Chuck Carr nor Richard Greenwood have been shown the exit for their involvement in shielding these individuals.

This is precisely why sites like Blue Penguin’s Fit-2-Fly, Kathryn’s Report, Sky Graffiti, CAP Insights and AuxBeacon are required to pick and preserve “the cherries of creeps” in Civil Air Patrol.