[Editor’s Note: We had a transcript prepared from screen captures that were sent to us with “black highlighter” on the names to protect both the innocent and others.]

[RedactedX]: John Postl opened his mouth again, this time in the YKYICW group. He mentioned AuxBeacon which should be no-go in public.

[RedactedY]: I saw that. He’s only hurting us by driving more disgruntled rejects to turn all our dirt over to them. Smith seems to be beside himself with the escalation of bad news leaks. Ninness continues to self-destruct on cap-talk, but no-one will tell him to his face.

[RedactedZ]: RedactedB and I are not members there. What did Postl say? 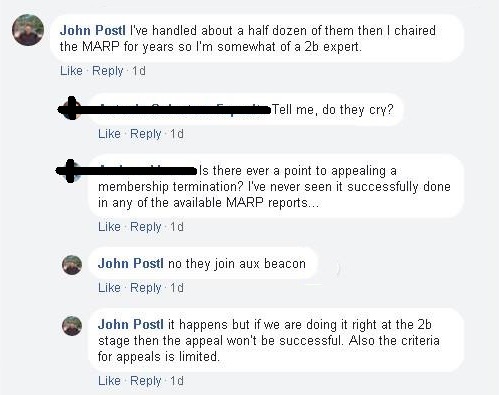 With a good 2B setup, no due process in Civil Air Patrol.

John Postl: I’ve handled about a half dozen [MARP appeals] then I chaired the MARP for years so I’m somewhat of a 2b expert. [Reversals] happen[s] but if we are doing it right at the 2b stage then the appeal won’t be successful. Also the criteria for appeals is limited.

[RedactedX]: Postl’s statement is a glaring confession on CAP’s attempts at the kangaroo court. Postl is also wrong or has deliberately misled the membership to elevate himself. The MARP reports show many termination reversals that exposed corrupt Civil Air Patrol commanders. I know that one of the former IG’s gave AuxB the idea to make that high profile on their site.

[RedactedZ]: This is ludicrous. The remaining CAP members are way too sloppy and impolitic to be this high profile.

[RedactedY]: Doing that might appear as an admission or weakness regarding the molestation, drugs, aviation accidents and reprisals that have been reported. Smith is better off just removing Postl or even 2B’ing him to set an example.

[RedactedY]: Do you think it wise to encourage snot-nose Captains to fink on their commanders, especially given how bad the gene pool is for that duty position now?

[RedactedA]: Do you have a picture of Postl?

[RedactedX]: Sure do. See here. 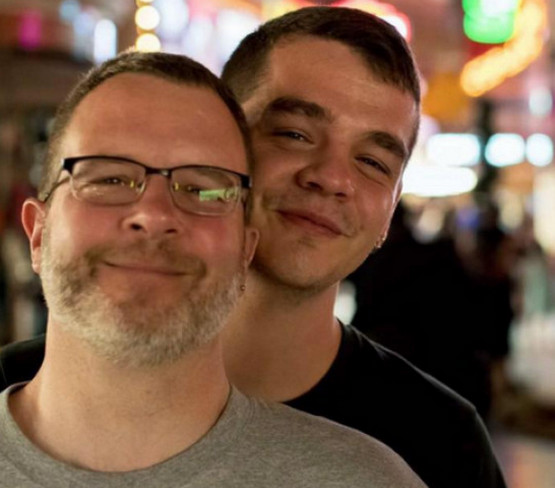 [RedactedA]: Is that his son? I was looking for a pic in CAP uniform.

[RedactedX]: See my PM. Here is a pic in uniform. 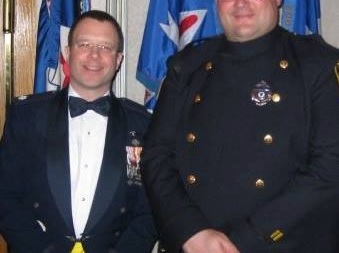 [RedactedA]: Man, Kettel was dead wrong regarding how long this onslaught against us would last. They get dirt from all regions and wings, as if a GD reject union has formed or as if someone turned over the entire complaint database to them.

[RedactedB]: Who gave them the Civil Air Patrol corruption and FBI raid chapter from Allan Stein’s book? It stabs at Kettel, Campbell and Anderson from the grave.

[RedactedX]: Ninness defected to the U.S. Army Cadet Corps and served as their Recruiting Officer, but came back to CAP after ACC collapsed from their failed military academy venture. Ninness worked with Skrabut before Skrabut “retired”. AuxB ran a video that the two of them made about CAP’s loss of membership.

[RedactedA]: It is embarrassing, AuxB content and images fill the search feeds now. They are getting more support under Smith, not less. Prison convictions, the NTSB linkage, the drugs found in pilot bodies after crashes, WTH?. They may have a field day with PCR/VC Carl Morrison when those details come out. We are losing the good and stuck with the bad and the ugly.

[RedactedY]: Ninness recently became frustrated with a captalk poster who suggested that Smith was becoming a new Pineda.

[RedactedB]: Thanks to Kettel, Smith looks more like a limp fish unable to recognize the end to which he is being led.

[RedactedN]: Holy deleted comm, Batman. You need to see this.

[RedactedK]: Laughable that Postl would set himself up to be targeted by Smith that way.

[RedactedN]: No, never do. Do you think Postl has anything on Smith?

[RedactedK]: Not sure, doubt it. How many in that group?

[RedactedN]: Enough that they won’t know its me.

[RedactedK]: You have all of [redacted] and YKYICW saved since the beginning, right?

[RedactedK]: Can you scrub it and send? Be sure to include the cross over from their group to ours so that it makes sense. Thanx.

Be first to comment on "Postl: No Due Process if CAP Setup Done Right"