By Jonn Lilyea | This Ain’t Hell

[Editor’s Note: The Stolen Valor Act of 2013 (Pub.L. 113–12; H.R. 258) is a United States federal law that was passed by the 113th United States Congress. The law amends the federal criminal code to make it a crime for a person to fraudulently claim having received any of a series of particular military decorations and awards with the intention of obtaining money, property, or other tangible benefit from convincing someone that he or she rightfully did receive that award.

The Stolen Valor Act of 2013 amends the federal criminal code to rewrite provisions relating to fraudulent claims about military service to subject to a fine, imprisonment for not more than one year, or both an individual who, with intent to obtain money, property, or other tangible benefit, fraudulently holds himself or herself out to be a recipient of the Purple Heart.]

Meet Chelle Lynne Anderson-Tesla who is currently a major in the Civil Air Patrol in Virginia and assigned to HQ, VA Wing as Director of Aerospace Education. She got that job because she represented herself as combat-wounded Army Aviation Captain, and a UH-60 Blackhawk pilot. Of course, she’s here on TAH, so you already know that none of that is true.

She was a PFC Air Traffic Controller for less than two years.

I don’t know how she got a Good Conduct Medal with less than 3 years service, but there it is.

She claims that she earned a Purple Heart when her Blackhawk was shot down in Iraq and, of course, because of that incident she claims she suffers from TBI and PTS. but, as her records show, she’s never been to Iraq.

She also claims that she had enlisted time before she went to OCS. So, I thought I’d give her time to prove that to her unit who has confronted her with this information, in case the NPRC’s records were deficient. But I’ve just heard that she’s resigning from CAP “because of all of the politics” which means there won’t be any proof forthcoming. So mainly, this post is to prevent her from pulling the same scam in another state when it hits the search engines. 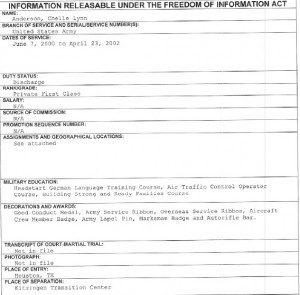 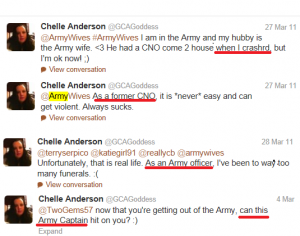 James Quinn, Maj, CAP, Vice-Commander, Virginia Wing
And this guy James Quinn replied to my post (in a PM) about her being a fraud: I conducted the CAP investigation into Maj Michelle Anderson Tesla. I am not permitted to disclose the details to you, but there is nothing that forbids me from telling you that you have no clue what you’re talking about. Please stop spreading rumors and malicious lies, unless you have evidence that you would like to present that would be useful. (Ed. Note – Apparently, Quinn did the investigation on his own accord without the wing inspector general.)

Former Grunt
Wow, sounds like James Quinn is the CAP’s very own version of Dwight Schrute. If he’s really an investigator of any kind, he must suck at it, because either a FOIA for her records (just like Jonn did) or her signature on a SF 180 would put the entire matter to rest once and for all. He doesn’t seem to understand that it would be really easy to call us all a bunch of idiots and prove us wrong, or more likely he doesn’t want to have to acknowledge the real truth of the matter and just hide behind the whole PC/White Knight thing.

I struggle to believe that one person can lie so much about something so important to so many. To rob their sacrifices and make it her own, for attention and sympathy. Truly a disgrace. At the end of the day, I don’t see why she or one of her friends (this Quinn guy) won’t simply provide proof. Anyone worth their salt would understand peoples’ concerns and simply provide proof. “Yes, there’s been a misunderstanding, I changed my name for personal reasons, but you can clearly see here on my DD 214, that I have been awarded the Purple Heart.” If I were in her shoes, that is what I would do. The longer this drags out, the harder she will fall and it will hurt not only her, but her son (think about her son), this C.A.P. organization, and even her close friends.

I did a quick search of all the names she has (Tesla, Anderson, Chell, Michelle, Lynn, etc., in all combinations) and there is no report of a female blackhawk pilot being shot down or crashing in Iraq other than Tammy Duckworth. My brother-in-law is a blackhawk pilot and has been to Iraq twice and Afghanistan once. He’s the same age as Tesla-Anderson, and has never heard of her, or of a female blackhawk pilot being shot down/crashing other than the one I already said. I have so many friends that have suffered true TBIs, lost limbs, and will likely be on meds for most of their lives due to their experiences. You are robbing them of their honor by making false claims. If your claims are true, then prove it. If they are not, come clean and walk away. It’s that easy!

Nathan Watkins · Hospital Corpsman at U.S. Navy
I personally know Chelle. I was in the civil air patrol squadron she was in. She told all of us her war stories, and we ate it all up. She was a hero in our eyes. She also told us a story that i don’t see you have, about how her son was killed during the first Ft Hood shooting. I have a picture on my Facebook page of her and I laying a wreath down at a fallen army soldiers grave during a wreath’s across america ceremony. I thought it was such an honor at the time. But now i know it was all a lie.

Brian Wheater · Driver at Des Moines’ Finest Family Owned Concrete Company
Civil Air Patrol is an excellent organization. When it was announced SAR in CONUS would be cut because of Our Dear Leader Obama’s sequester, I had to laugh. CAP does most of that anyway and we saw little or nothing in reimbursement. That said we had plenty of bad apples, like any organization. It included posers, wannabees and even pedophiles. I’m told the real probs, the pedophiles, are being screened out, like any organization with kids does, like the YMCA, BSA, Big Brothers/Sisters, etc.