[Editor’s Note: We received an anonymous tip regarding this crash. Thank you for your contribution. This Civil Air Patrol plane crash in New York was attributed to pilot error.]

A Civil Air Patrol plane crashed into a Queens house yesterday, killing a 16-year-old air cadet and injuring two other cadets and their pilot.

Police said that there teenage cadets and the pilot, CAP 1st Lt Annette Leder, 27, had just left Flushing Airport in a single-engine Cessna 172. The small plane took off at 10:55 a.m., heading east. Then it reportedly turned in a wide semicircle and appeared to be heading back to the airport when it lost altitude and crashed into the roof of three-story home at 144-69 27th Ave., at the corner of 146th St.

The plane struck the house and burst into flames at 10:08, three minutes after takeoff. Two of the cadets and the pilot fell from the plane to the ground. The third cadet, Edwin Guevara, of 740 E. 149th St, Bronx, was trapped in the blazing aircraft and died before rescuers could reach him.

Ms Leder, of 3535 DeKalb Ave, Bronx, was reported in critical condition at Flushing Hospital after more than four hours of emergency surgery for spinal injuries and multiple fractures of the arms and legs. 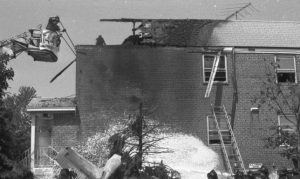 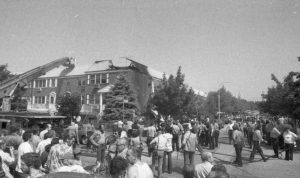 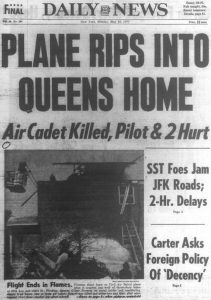