[Editor’s Note: We received this request from a (verified) former Civil Air Patrol member who has offered their own thoughts on the event.]

A few days ago [May 19th 2017] I watched as the Tivoli Circle Robert E. Lee Monument on St. Charles Avenue was taken down under official and legal order.

White supremacist violence preceded this event. I’m talking specifically about the fact that last January contractor David Mahler, who had been hired by the city of New Orleans to remove this and three other statues backed out of his contract after he and his associates received death threats. On the morning of January 19th, 2016 his $200,000 Lamborghini Huracan was set ablaze and completely destroyed.

Today I got to see Mississippi state Rep. Karl Oliver tell us that:

The destruction of these monuments, erected in the loving memory of our family and fellow Southern Americans, is both heinous and horrific. If the, and I use this term extremely loosely, “leadership” of Louisiana wishes to, in a Nazi-ish fashion, burn books or destroy historical monuments of OUR HISTORY, they should be LYNCHED! Let it be known, I will do all in my power to prevent this from happening in our State. 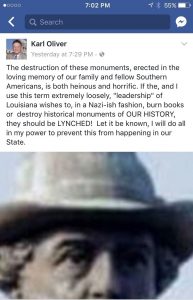 Rep. Oliver’s statement is a lie on two counts. The monument was not destroyed in Nazi-ish fashion by our leadership who authorized its legal removal. It was removed to an undisclosed location because it is divisive to insist that we honor those who fought against The United States in support of state’s rights to permit the ownership of another human being. Other contributors to your AuxBeacon cause have already shown the true intent for these Confederate statues. Most were erected between 1890 and 1929, 30 years AFTER the end of the Civil War when Jim Crow laws were being enacted.

It was wrong to require people who needed to conduct education, financial or legal business in the area to be overshadowed by this constant reminder of abuse and hatred.

The problem we face now is that there is no legal recourse for the removal of Confederate statues in some places because of both old and new laws established to inhibit their removal. See Sen Mack Butler and Gerald Allen’s SB60 bill for an Alabama Memorial Preservation Act which will very likely soon be signed into law by Auburn’s Kay Ivey up there in Montgomery.