[Editor’s Note: An AuxBeacon reader who appears to have a background in Forward Air Control wanted DoEchelon to know that their report on the “perception masters” of Southeast Region Civil Air Patrol has struck target. Additional comments, images and stories regarding this shameful tactic are inbound to us and we are reviewing all of them for accuracy. None believe that Congressman Loudermilk should have accepted this award. Thank you for your volunteer contributions.]

While the delusional leadership attempts to maintain a veil of denial, members are finally seeing measurable impacts on the infested target areas of Civil Air Patrol. Here is just one example.

I am Facebook “friends” with Georgia Wing commander CAP Colonel Andrea Van Buren and she is one self-absorbed and chatty Cathy of an opsec violation. A post on her timeline regarding the Barry Loudermilk Silver Medal of Valor Award had received 5,990 views and well over 300 like reactions. That is until…

DoEchelon’s JDAM of a report on this ridiculous perception management stunt completely decimated that post. All the comments have been deleted as well. In addition, Barry Loudermilk removed this award announcement from his Twitter feed. Both membership and taxpayers, as you often say, are waking up to the garbage that they have been fed.

CAP PAOs can no longer convincingly refute the visual evidence that their own commanders are self-generating in their clumsiness. Check it out for yourself here and kudos to all who are not taken in by these laughable Jedi Mind Tricks. 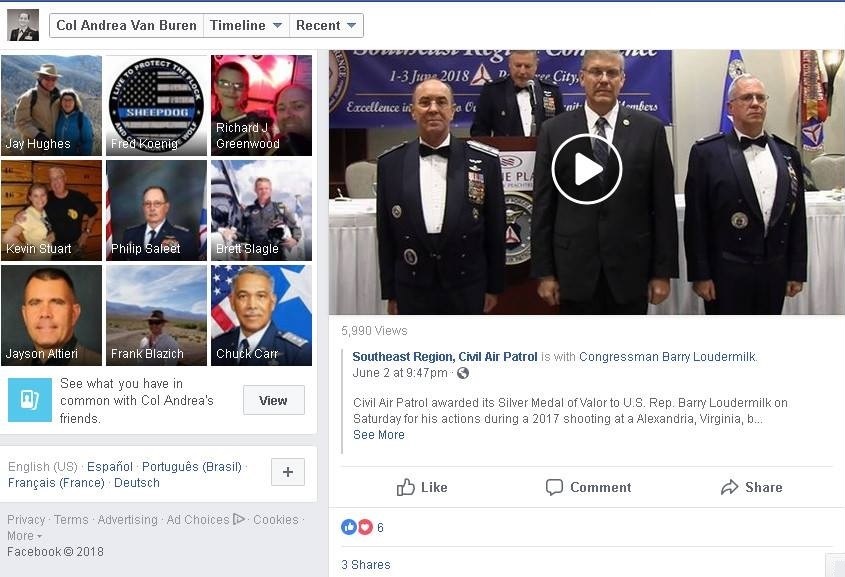 I noticed that your contributor, DoEchelon, was able to take both praise and critique for their report on Barry Loudermilk’s stumble into the Richard Greenwood Medal of Valor Association. For people who don’t write for a living and are trying to serve as volunteers, it can be a thankless and painful sacrifice to spend time reporting these negative influences in our communities. DoEchelon’s report is well received.

Related Stories
• Loudermilk: “I had no way of defending myself or my friends. I felt completely vulnerable.”