[Editor’s Note: We’re aren’t exactly sure where this is going, but we can guess. We’ll even do some of the work below. If the anonymous author (or others) dribble in factual statements over time, we will add them to the story. Thank you for your contribution.]

I saw my Louisiana congressman’s embarrassing performance on the tube today and I want to talk about him and the Civil Air Patrol connection. But I’m not gonna put a whole lot of effort into it if you won’t publish the story. Let me know? Clay Higgins

Our editors continue the story.

We gather from the author’s choice of pseudonym where he or she may be going with this. One of our researchers found the following article and image that supports the initiative and link to Civil Air Patrol Government Relations. 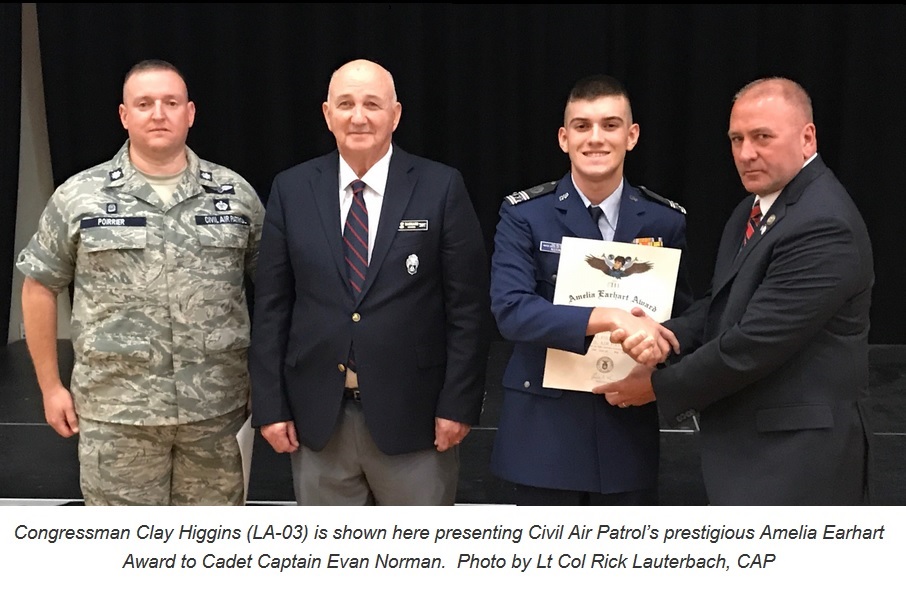 In today’s Congressional Hearing with Michael Cohen, Clay Higgins avoided asking the witness any questions about Donald Trump, and instead focused only on attacking Cohen’s credibility to provide any meaningful evidence against Trump. But that’s not how cops work outside of their personal political agenda. Cops… even dirty ones… can ask known criminals and liars questions to get potential leads to evidence. It is done all the time, and for Clay “Pepper” Higgins to feign that he doesn’t understand this makes him just as big a liar and deceiver as the President of the United States.

That Higgins didn’t avail himself of the opportunity speaks more to his bias and failings and does support the author’s suggestion that Higgins should be examined: Here’s the story:

2016: Sheriff Bobby Guidroz again warns Higgins against using disrespectful and demeaning language about suspects. He issued a statement saying that Higgins’s comments underlined “a growing undertone of insubordination and lack of discipline on Higgins’ part”.

Guidroz made statements that Higgins had violated department policy by misusing his official badge and uniform for personal profit and gain, citing Higgins’s wearing a uniform in an ad for a security firm. In addition, he reprimanded Higgins for using his badge and uniform in his personal website to support sales of T-shirts and shot glasses for his Limited Liability Corporation (LLC). In addition, Higgins used the department’s physical address in registering his LLC with the state, and both actions were against department policy.

Reports show that Higgins conducted his private business via email on “his government email account during work hours without the permission or knowledge of his supervisors. Higgins also appears to have attempted to conceal his earnings from the IRS in order to avoid wage garnishment for unpaid taxes. Whether those actions constitute tax fraud is unclear.”

March 2016: Under this fire, Higgins resigns from St. Landry Parish and is soon accepted and sworn in as a Reserve Deputy Marshal in the city of Lafayette, Louisiana.

January 2017: After winning a runoff election on December 10 2016 with 56.1 percent of the votes cast, Higgins was sworn into the House of Representatives on January 3, 2017.

July 2017: Higgins posted a five-minute video on YouTube from Auschwitz concentration camp, including a section from within one of the gas chambers. He said:

“This is why homeland security must be squared away, why our military must be invincible“.

This video was widely condemned as inappropriate, especially by the Auschwitz-Birkenau Memorial and Museum, whose spokesman wrote in a Twitter post that “the building should not be used as a stage”.

Higgins later removed his video from YouTube and issued an apology.