[Editor’s Note: We received this submission today from an AuxBeacon Reader and a Civil Air Patrol Redditor.]

“We’re not seeing a “massive drop” in recruiting & retention. Over time our recruiting (ie. “new members”) and end strength have varied up and down, but our retention levels have remained fairly flat. At the moment, we’re actually doing a slightly better job of retention, but over the past year, the number of new members we’ve recruited nationally has been down…”

The same as every other organization: poor leadership.

The ones who tend to stay in CAP long enough to reach the positions powerful enough to change things are often the same ones who find the current status-quo just fine; the ones who want to change things for the better are quickly run out of CAP or break within a year or two. If you rock the boat, you are targeted.

My SQ/CC personally warned me to leave things alone when I reported a cadet contacting me anonymously about a cadet protection policy violation in another squadron. The reason I should leave things alone? The cadet “may be a trouble maker”. Thankfully I was able to find a way to help the cadet and stay within CPP compliance with the difficult nature, but that was a wake up call and a frustrating time.

My GP/CC has refused to take action after a SM reported our SQ/CC for inappropriate romantic remarks, including calling her on her private number to confess his love to her and later refused to promote her for 6 months after she reported him. She has now left CAP after feeling unsafe visiting the main squadron.

My WG/CC has refused to grant my flight a charter status as they don’t believe we deserve one even though for two years now we’ve been ready to separate from my squadron. We have a facility, personnel, uniforms, and experience… but they still find random things to deny us. Unofficially I have been informed by personnel in wing that our flight is shit-listed by the WG/CC for some reason and now they basically ignore us.

CAP is dying. The leadership needs to be held accountable. But they won’t. 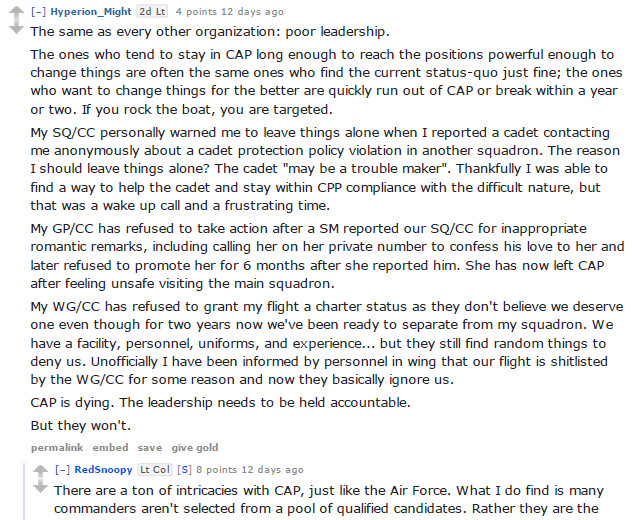 This comment has since been deleted in the subreddit.  Why?  Because bullies, liars, forgers, sociopaths, pedophiles and unsafe pilots permeate this sick organization.

[Editor’s Note: Other comments that support the original are provided below.]

[–]RedSnoopy Lt Col[S]
There are a ton of intricacies with CAP, just like the Air Force. What I do find is many commanders aren’t selected from a pool of qualified candidates. Rather they are the ones that have reluctantly agreed after no one else wanted the job. Many of them Ill prepared to take command. I just saw in your comments a CPP, an EO, and an IG complaint. Commanders should be able to take action. And just because there might be work involved, does not give them a reason to ignore or turn a blind eye.

[–]in_the_corner C/Maj
I agree with your sentiment, and can relate to your experiences. I’ve had several experiences within the past two years similar to yours in my wing, and people whom I talk with feel the same frustration. Unfortunately there is cronyism, and it’s gonna take a long time for these issues to resolve. If I knew how to change it I would.

[–]kcebnaes Maj
Yes. Totally seeing this problem. I am in charge of our wing’s smallest group(numbers-wise.) We’re so small because of poor recruiting and retention efforts in the past. Some root causes: poor leadership on all levels(in regards to R&R); over-stating CAP; giving false promises(promotions that are against the regs, “you’re unit will have an airplane to use however you want,” etc.) and a few more. What are we doing right? We have a kick ass cadet program, when done properly. We have the ability to send kids up in the sky and show them a love of aviation. We can assist the Air Force and local authorities with search and rescue efforts, and disaster relief type stuff. What are we doing wrong? We don’t follow our own rules. We let things go, that we shouldn’t turn a blind eye to. Like I already mentioned, we give false promises of things we shouldn’t. We aren’t encouraging our members to stay or move up in ranks. We encourage laziness(members barely show up, care, or want to participate.)

What am I learning? I’m learning exactly what not to do, and to implement policies and a new culture in my group that is turning the ship around, away from the waterfall of death.

[–]neuromancer1987
Speaking from personal knowledge, the quality of the CAP “experience” has taken a huge nosedive in the last 10 years. This is at least true for my locale here in the greater Los Angeles area. I am about 30 now and I was recently considering rejoining as a Senior Member. After seeing the sorry state of affairs at so many formerly great squadrons, I decided against it. I mean, its really abysmal: a lot of squadrons have shut down or are barely functioning in no small part due to absent or neglectful leadership. I’ll take my lumps for not wanting to be an agent of change, but why would anybody want to be a part of this? I understand Lt Col Ninness’ argument above that we are simply in some sort of recession… but, I don’t think so. This is something else entirely that is happening in this region. Perhaps it is the zeitgeist of the anti-military, pro-stay-at-home-on-your-Xbox mentality, but I think CAP may have its greatest days behind it.