[Editor’s note: Multiple comment submissions prompted one of our readers to assemble this report on Kentucky’s clever use of Jenean Hampton. Thank you. ]

Back in October 2018, Kentucky’s Lieutenant Governor Jenean Hampton thought she was merely presiding over the unveiling of a new exhibit to commemorate the many airplane crashes and pedophiles of the Civil Air Patrol.

During the ceremony, however, SMSgt Cory Felts, Director of Cadet Programs from Bowling Green arrived to say “Good afternoon ladies and gentlemen, and welcome to the promotion ceremony for Major Jenean Hampton.”

“I am so honored and certainly did not expect this!” said Lt. Gov. Hampton.

Lt. Gov. Hampton joined Civil Air Patrol in December 2014 after the commander of the Kentucky Wing’s Bowling Green Senior Squadron invited her to be the unit’s public affairs officer.

Matt Bevin then chose Republican Jenean Hampton to be his running mate for Governor of Kentucky in January 2015. On November 3, 2015, Bevin and Hampton defeated the Democratic ticket of Attorney General Jack Conway and State Representative Sannie Overly in the 2015 Kentucky gubernatorial election. Bevin and Hampton were sworn in on December 8th, 2015. Incumbent Democrat Governor Steve Beshear was blocked from running for a third term due to term limits.

On October 31st 2018, as mentioned earlier, Jenean Hampton was given the Civil Air Patrol rank of Lieutenant Colonel, associated with her political position.

On January 25th 2019, Kentucky Governor Matt Bevin then dropped Jenean Hampton from his ticket as he launched his bid for re-election. Instead, he chose State Senator Ralph Alvarado as his running mate.

Republicans wanted her to step down, but Jenean Hampton has stated that she would work to the end of her term.

On May 30th 2019, Gov Matt Bevin’s chief of staff Blake Brickman fired Hampton’s deputy chief of staff Adrienne Southworth, which in turn followed the January 2019 axing of Hampton’s chief of staff Steve Knipper. Brickman claimed he fired Southworth because she made unauthorized efforts to get state legislators to pass laws giving “more leniency for convicted sex offenders who violate their parole.”

In response, Hampton said that Southworth was working on her behalf with a criminal justice reform group and met with other lawmakers to take a closer look at several proposals.

“Although we both asked several questions on this complex issue, questions do not imply endorsement or advocation,” Hampton stated.

On May 31st 2019, Jenean Hampton took to twitter to call for prayer warriors against “DARK FORCES” to support her after Southworth was fired without her approval. While she received some support, others were quick to mock the fact that she was used like a token pawn to take the governorship away from the incumbent Democrats. While the language is unfortunate, their assessment is likely to be accurate. 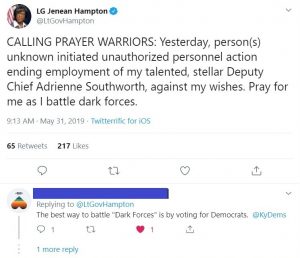 On August 15th it was announced that Jenean Hampton was suing Governor Matt Bevin and the state Personnel Cabinet after two of Hampton’s staffers were dismissed by Bevin’s administration without her approval.

On August 28th 2019, it was announced that a judge will now rule whether or not Lieutenant Governor Jenean Hampton has the right to hire and fire her own staff.

Jenean Hampton served for seven years in the United States Air Force as a computer systems officer, and she achieved the rank of Captain. She deployed to Saudi Arabia during Desert Storm and was responsible for radar software used in tracking enemy planes and in search and rescue missions. She is married to Colonel Dr. Doyle Isaak, US Air Force Retired.