Civil Air Patrol’s Frank Blazich, who just resigned as CAP National Historian, has re-appeared as a “Frank says parrot” for the Wreaths Across America charity scam.

AuxBeacon readers might need a refresher on Frank Blazich, who was previously involved in the tail end of the coverup of the Jim Shaw and CAP History Foundation theft that involved the sale of Civil Air Patrol artifacts for personal profit. Former CAP Inspector General Merle Starr and former National Commander Maj Gen Chuck Carr issued rulings against Jim Shaw that were concealed from the public while a reprisal was orchestrated against Lt Col Mark Hess who properly and formally reported the theft during the run up to the Total Force announcement.

After Blazich’s reprehensible emails were exposed, Civil Air Patrol took no immediate action to remove him from his position as CAP National Historian and only recently has he resigned from that post.

In a stunning counter to Blazich’s latest maneuver with the Wreaths scam charity, Georgia Wing Vice Commander Lt Col Jeff O’Hara came out openly against this corrupt CAP leadership practice to say that Wreaths Across America is not good for the ethics or public image of Civil Air Patrol and that our membership has been duped. 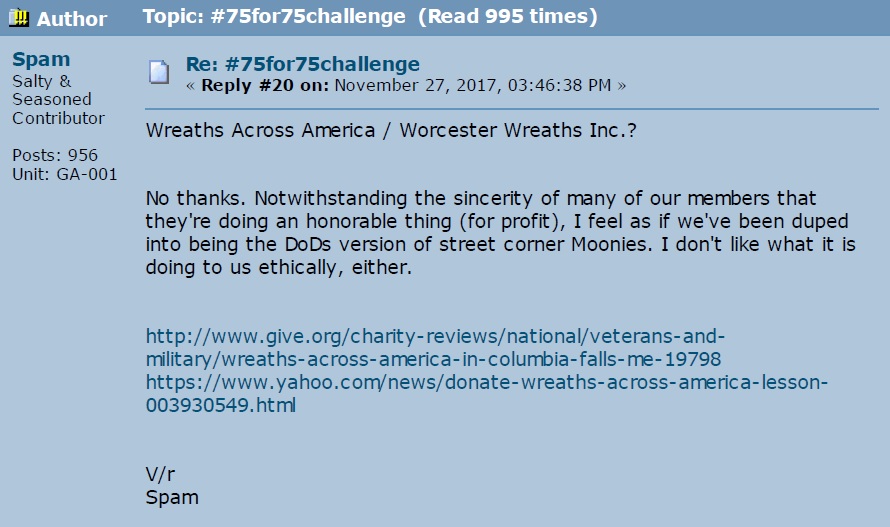 Wow. O’Hara’s “frank” post is supported by those articles previously shared on AuxBeacon, such as this one by Stacy Johnson and another by Mary Cummins. In her December 17, 2016 evaluation, Cummins made the following assessment.

A for-profit wreath company invents “Wreaths Across America day” and starts non-profit “Wreaths Across America.” The day is the third Saturday of December which landed on my birthday today. They get Veterans groups, Christmas lovers to donate money to basically buy wreaths from them which they get volunteer truck drivers to deliver and [Civil Air Patrol] volunteers to dump them on Veterans’ graves for free positive publicity, advertising.

While the business has noted the conflict with the non-profit nobody bothers to research or read that information. They only see the feel good story, veterans, Christmas. This is obviously a $20,000,000 money making “Wreaths Across America” scam made by for-profit Worcester Wreath Co, Morrill Worcester, Karen Worcester.

They charge more than what other wreath companies would charge. They now use cheap migrant labor instead of locals. They have violations for illegal clear cutting of acres of trees. What’s even worse is that they get volunteer truck drivers, wreath placers to deliv er and place the wreaths on the graves!

“The Worcester companies have incurred $95,000 in fines for violations of Maine tree harvesting regulations. Worcester Peat Co. Inc. is in the peat harvesting business. According to the Maine secretary of state, the shareholders for that company are Morrill Worcester, his wife, Karen, and (daughter) Pamela Slav en, all of Columbia Falls. Morrill Worcester is named as the manager of Worcester Holdings, LLC. It is described as a property land holdings company in the 2008 annual report of the Maine secretary of state.”

Their site says “When you donate to WAA your money goes to a wreath first, and we operate on the small margin remaining after purchasing and placing that wreath.” This makes it very obvious that most of the money goes directly to the for-profit business Worcester Wreaths. Here is their nice graphic. This graphic is the Worcester Wreath company bragging about how much money they made in this scam. 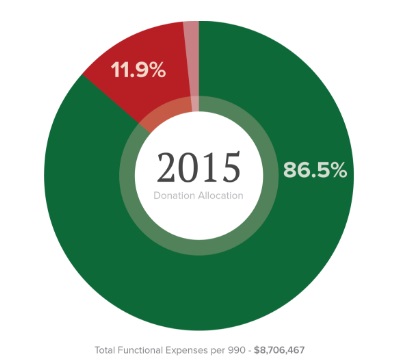 My grandpa and other relatives are buried at military cemeteries. I will contact them and make sure no WAA is ever placed on their graves. This company uses dead veterans to make money.