Here’s a story we don’t see every day. The Civil Air Patrol’s Florida Wing apparently has two officers in the pornography business. They’ve been identified as Lt Col Kevin McSparron and Maj Heather McSparron, and both are in the CAP’s Florida Wing.

Sources tell us that during the June 2015 Florida Wing’s Cadet Summer Encampment, Lt Col Kevin McSparron was named the Encampment Commander and he was recently made the deputy commander of the Wolfpack Squadron in Palm Bay, FL. Maj Heather is the former drug demand reduction officer for the Florida Wing, and was trying to get on at the CAP’s Southeast Region headquarters. In their profile on AdultFriendFinder, Kevin states that he is a “recreational drug user.” 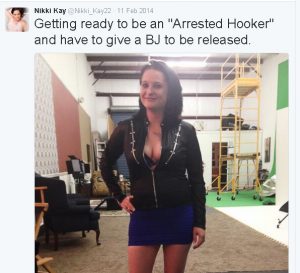 An NOTF search has shown numerous sites and social media outlets that Maj Heather McSparron is on under her “stage” name. Here are some of their websites (Warning: graphic and sexually-orientated material follows): On AdultFriendFinder, “Nikkikay22 Palm Bay, FL 36M/36F The wife is currently overseas but comes back every 3 months. Looking to fulfill her fantasies of cream-pie gang bang, young guy, bbc cherry popping, very open to anal and double penetration. My Ideal Person: Young guys, have a thing for them. BBC virgin, that needs attention, age is not issue. Wanting to test limits with hung cocks…and that means multiple.”

NOTF checked the Florida Wing’s website for the location of the “Wolfpack Squadron,” and there are no Florida units listed with that name, but that could be a CAP squadron’s nickname. A call to the Florida Wing’s headquarters resulted in our being told that, “We’ve never heard of that squadron,” and they apparently didn’t know where Palm Bay is. And a message left three days ago seeking comment with the deputy director of Public Affairs at the CAP’s National Headquarters at Maxwell AFB, in AL, has still not been returned. But since the Air Force goes completely off the rails if a female Air Force member dares to pose for photos in an adult magazine, we’ll be watching to see how this is handled.

In the interim, an article that appeared in News of the Force, on Thursday, February 18, published the names of the members under investigation and provided links to adult websites allegedly linked to them. This was essentially the same information that was under investigation by NHQ. When the allegations were made public, both members voluntarily resigned their membership in the Civil Air Patrol.

As you all are keenly aware, the Civil Air Patrol’s Cadet Program is a leadership training program that nurtures the talents, skills and abilities of youth 12-20 years old. We have nearly 75 years of rich history of producing highly successful citizens who continue to serve their communities long after they are no longer cadets. Also, we have a solid cadet protection policy in place designed to ensure all cadets’ experiences in CAP are appropriate and rewarding. Rest assured that the safety and security of all our members has and will always be a priority in our organization and the Florida Wing. Any members with questions or concerns should contact Julie DeBardelaben, Deputy Director of Public Affairs, CAP National Headquarters, at [email protected] .” [She is completely out of touch with reality. She cherry coated the problem, rather than upheld CAP’s core values of being honest.  If true, this scandal would of never of happened.]

However, in yet another case of the CAP waiting until a fire erupts in their faces, nobody told the Wing’s members what was going on in this matter. Additionally, Col Irizarry made no mention as to why these two people were even assigned to a CAP cadet squadron or why the two CAP officers were not “suspended” if, in fact, an investigation had already been commenced.

Meanwhile, a source told NOTF today: “Lt Col McSparron and his wife promote marijuana use on their Facebook accounts, yet Heather was the Florida Wing’s Drug Demand Reduction Officer for several years and worked with National Headquarters on anti-drug initiatives. They have been involved with CAP cadet programs since 2007. They photograph nude erotica and semi-nude models (such as high school seniors) and have a fascination with women suicides, playing with guns, overdosing on drugs and being murdered.”

Is Florida Wing Headquarters too stoned to know Heather was on their staff and Kevin was the Florida Wing Encampment Commander for the past few years?

And this one dropped into our inbox today:

“To whom it may concern, It has come to my attention, through a news publication (newsoftheforce.org)’s Thursday, Feb 18th edition, that the Florida Wing Commander and his staff have willingly endangered hundreds of children by allowing their exposure to two pornography artists in Civil Air Patrol (CAP). As a parent of a former cadet, I am incensed that our youth would be knowingly put in this type of jeopardy. I know that the Wing Commander has been contacted multiple times by both Group Commanders and Squadron Commanders about these people and other violations of CAP directives and yet he has continued on in his capacity as though nothing is wrong with this situation.

These are unacceptable values for someone who is supposed to be a leader and guardian of our youth – especially with the environmental exposure of sex, drugs, peer pressure and violence that we combat on a daily basis. Parents allow their children to join the CAP to expose them to qualities and standards of the U.S. Air Force/military and how they can improve their lives, community and personal growth – not to knowingly expose them to harmful and potentially dangerous predators.

From a liability standpoint, I’m horrified that it has gone completely unchecked in this situation. I will no longer recommend CAP to any parent who asks me about youth programs. Instead, I hope to educate them on your dangerous Commanders in my state and discourage anyone from joining this organization until the region and wing commander are removed and checks and balances are put into place to prevent this type of “cover-up” again where it concerns the safety of our children.”
– Lisa Dutton, Orlando, FL

Another source told us today that a Florida Wing aircraft stationed at the North Perry Airport is still flying, even though it is two months past its annual inspection date. And yet another writes: “I am in Melbourne and know these two since they joined in this area. I tried to file a complaint about him dealing with cadets over a decade ago. This is outstanding news. Gob Bless you and your sources!”

“When it was publicly exposed by News of the Force that our then-national commander, Maj Gen Antonio Pineda had others take tests for him at or the Air Command and Staff Collage, Gen Pineda was immediately suspended and then after a thorough investigation removed from his position. Those were the good ‘ole days of the CAP compared to now,” a reader wrote to us today. “

In addition to serving as the Wing’s Encampment Commander at least three times under the command of Col Irizarry, most recently last summer, Lt Col McSparron also served as head of the Cadet Special Activities Board, the Wing’s Cadet Competition, Color Guard Academy (twice) and the Regional Cadet Leadership School (also twice), all under Col Irizarry’s command. At the 2014 Wing Conference the photographer hired for the conference was…you guessed it, Lt Col Kevin McSparron,” the writer told us. ”

An email was sent out to the membership of the Florida Wing earlier on the day after the story broke on NOTF by Col Irizarry that used terms like ‘immediately began an investigation’ and ‘In the interim, an article appeared in News of the Force,’ designed to lead the readers to believe that this was a bombshell revelation that caught every-one by surprise and that action had been taken as soon as it was discovered – before the article broke in NOTF.

Now, multiple anonymous sources who are fed up with the inaction of CAP Headquarters after multiple complaints about the Wing Commander had been filed over the last two years are publicly revealing and providing evidence that Col Henry Irizarry knew of the pornography at least seven months ago (members say much longer).

In July of 2015, a complaint was filed though the Florida Wing IG system in which the filer stated, ‘Col Irizarry has abused the Wing Commander’s authority by allowing the photographs of Florida Wing cadets, Florida Wing logos and himself appearing among S&M photos appearing on the photo web pages when a Google search for Lt Col Kevin McSparron is conducted. As a parent, I would not want my child attending any function in which the above personnel have any supervision responsibilities.’ The complaint was in response to Col Irizarry denying permission for all Florida Wing cadets to attend the 2015 summer encampment in another state. This complaint was filed prior to the 2015 Summer Encampment, proving that Col Irizarry allowed Lt Col McSparron to remain as the Encampment’s Commander even after his knowledge of the inappropriate photos.

Not only was the atrocity of the Lt Col McSparron incident not handled in a timely manner by Col Irizarry, but there are also now allegations of cover ups, Command Directed Investigations to circumvent the formal IG process, intimidation’s of cadets filing IG complaints about rouge pilots, and hiding accounts of cadet sexual abuse by an adult member from the CAP’s General Counsel and the Florida Department of Children and Families (DCF).

In the latter case, it wasn’t until another member who the cadet confided in reached out himself to the General Counsel, that the member was even suspended,” the source said. “In contrast to what Col Irizarry wants his membership (and more likely his leadership) to believe by the letter he posted earlier this week, a long-time pattern is emerging of Col Irizarry ignoring, and even concealing serous issues from his leadership until it is well beyond his ability to conceal any longer. Then and only then does he take ‘immediate action.’

But before we lay all faults of the CAP on Col Irizarry, after a full week of articles containing details you would only read in an adult bookstore, specifics you would go to any length to guard from your children – the very essence of the CAP Cadet Program, revelations of cover ups, intimidation, and even the exposure of lack of oversight on aircraft maintenance – a real hot topic at National Headquarters right now – Col Irizarry still remains in command.

Kind of makes you long for the good ‘ole days of Gen Pineda, doesn’t it?”