﻿By Howard Altman | The Tampa Tribune

[Editor’s Note: Lt Col Governale was actively engaged with cadets at the national and region levels where his victims stayed alone with him in his room at various youth oriented CAP events. Throughout the 15 years he was active with the CAP cadet program, not one senior member reported that he had cadets in his room. It is forbidden by CAP regulations for senior members to be alone with a cadet. It took a CAP cadet, a victim to bring this to the attention of law enforcement to get him to stop abusing cadets. At what point should the Secretary of the Air Force have legal and/or moral responsibility to ensure the integrity of the “corporate” management? Should the Air Force leave its CAP cadets so vulnerable to adult sexual exploitation and abuse?]

TAMPA —
For 15 years,
Stephen Governale worked with thousands of young men and women from around the country as the Air Force Reserve liaison to the Civil Air Patrol, mentoring, testing and teaching cadets about aviation, space and leadership.

A participating member of the Reserve since 1997 and lieutenant colonel since 2006, he earned accolades for his work. He served for a decade [2002 – 2012] as the co-director of the patrol’s CAP Cadet Officer School, a 10-day program where cadets from around the country gathered at Maxwell Air Force Base in Alabama.

But on Sept 28, Air Force Maj Gen Charles L. Carr, commander of the Civil Air Patrol, sent out an “
important message” about Governale to the nearly 27,000 cadets in patrol programs around the country.

Governale, 49, who also serves as a civilian protocol officer for U.S. Central Command, had been arrested four days earlier, charged with using the Internet to entice a teen from Seminole County to meet him for sex.

Investigators say Governale met the teen, and other young men he engaged in sexual relations with, through the Civil Air Patrol, which offers educational programs to those between the ages of 12 and 20.

The FBI, saying that Governale abused his position of trust, is now investigating Governale’s associations with the Civil Air Patrol, his contacts with the cadets and whether there are other victims. Investigators say they found “many, many” sexually explicit text conversations with young men on his cellphone.

“All CAP members having information regarding any criminal activity allegedly committed by this individual are asked to contact local law enforcement authorities in your area,” Maj Gen Carr wrote in his email. “I have the highest level of concern you could ever have,” said Jamie Russell, an aerospace science instructor with a Civil Air Patrol program in Sarasota. “The thought of putting cadets in danger with an adult in the world is just horrifying.”

The investigation into Governale began Sept. 11 when the parents of a Seminole County teen noticed sexually explicit conversations between Governale and their son on Facebook. After the parents contacted the FBI, the teen told agents that he met Governale in 2009, according to a complaint. The teen said that he went on two trips with Governale, stayed in the same bed with him, watched pornographic movies in the hotel and engaged in a “contest” where they masturbated together and touched each other’s penis, according to the complaint.

Pretending to be the teen, an agent from the FBI Innocent Images Task Force engaged in sexually explicit Facebook chats with Governale, who agreed to meet the teen at a Wendy’s in Orlando, according to the complaint. Instead of the teen, Governale was greeted by agents, who arrested him.

The FBI is investigating whether those people were minors at the time and whether there are other victims out there, Hyre testified. Hyre, trying to show that Governale was a danger to society and should not be given bail, testified that Governale engaged in a pattern of sexual conduct with cadets in the Civil Air Patrol program and abused his position of trust with those individuals, according to Gable. Magistrate Judge David A. Baker agreed to order Governale held without bail.

The Air Force would not comment on the investigation, referring calls to the FBI. Civil Air Patrol units in Tampa and St. Petersburg declined comment. Terry Governale said she met her husband in Tampa 19 years ago and married him four years later.

“From the first moment I met him, he was just the kindest, most sincere wonderful human being you could ever meet,” said Terry Governale, a teacher in the Hillsborough County school district.
The Governale’s spent a lot of time and money helping others in the community, especially families struggling with the economy, she said. They were inspired to reach out to others because their daughter, 21, has epilepsy, said Terry Governale. “We are always helping families,” said Terry Governale, who declined to talk about the charges against her husband. “Steve was always a go-to guy and generous to a fault.” 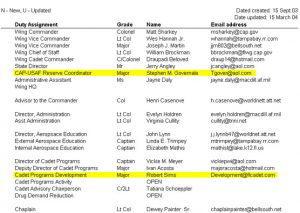