[Editor’s Note: We received this NRA article in our inbox. Thank you for your contribution. With mass shootings on the rise in our schools, the Civil Air Patrol is introducing the youth to a wide variety of weaponry in conjunction with the National Rifle Association (NRA).]

At 8:00 am on a Saturday morning earlier this year, the door to the Centralia Rifle Club & Junior Division’s indoor range in Centralia, Washington, flew open, and 42 BDU-clad teens marched in. So began another Basic Marksmanship Encampment (BME), a twice-yearly rifle training event which the club has put on for Civil Air Patrol (CAP) cadets from Washington and Oregon since 1984.

Civil Air Patrol is the civilian auxiliary of the U.S. Air Force, and its cadet program has over 25,000 teenage members in local units nationwide. On the evening prior to the BME, this group of young men and women had covered the first two hours of an NRA Basic Rifle Course with the Centralia Club’s NRA-certified rifle instructors. Throughout the rest of the weekend, the cadets learned to safely shoot .22 target rifles from the prone, sitting, kneeling and off hand positions. Each cadet fired 150 or more rounds, seeking to earn a Winchester/NRA Qualification shooting medal to pin on their Air Force-style blue dress uniforms.

“With about 2,700 cadets taught and over 68 of these events hosted, we’ve never had a single bullet go anywhere but into the backstop,” said Steve Carmick, chief instructor for the event. Carmick, himself a CAP Lt Col, added that this clean safety record is made possible by the cadets’ military style training and discipline. That discipline and dedication also contributes to their success as Winchester/NRA qualified marksmen. 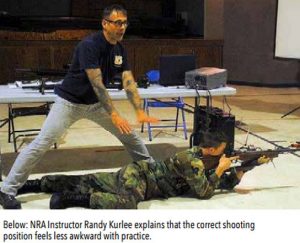 Some of the cadets at this Centralia event had been to several others, and a few were vying for Expert or Distinguished Expert ratings. Some local cadets have gone on to college rifle teams, and two alumni of the program even went on to become captains of the U.S. Air Force Academy small bore rifle team. And the Centralia club’s dedication to supporting youth shooting sports doesn’t end there. It is also home to two local high school rifle teams which compete in a local league. 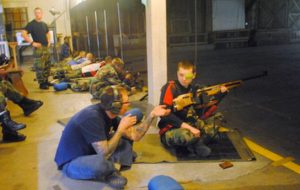 The Anschutz target rifles, shooting jackets, and spotting scopes used by cadets at the Centralia BME events were all obtained through NRA Foundation grants made possible by Friends of NRA fundraising in Washington. “Our club hosts one of the biggest junior shooting programs in Washington state, and all our rifles and all our equipment, plus major updates to our range building, came from NRA Foundation grants over a period of years,” shared Centralia Rifle Club & Junior Division President Daniel Steffens. “We support our local Friends of NRA banquet, big time.”