To make matters worse, he was also hit with a reprisal termination hearing to ensure that newly appointed Georgia Wing Commander Col Richard Greenwood would not suffer an IG complaint during his first year in the duty position.

[Editors Note: In 2013, Georgia Wing pilots operating under Col Greenwood and Lt Col Joe Knight III had been found guilty of improperly billing the U.S. Air Force for flight time against Air Force Missions that should have been paid by the pilots themselves. See Figure #1.]

Major Mike Bell served his country honorably in Iraq with the U.S. Army and was a civilian aviation Instructor.

By May, he came to the conclusion that he would need to file a formal complaint against Georgia Wing officers Lt Col John Aden and Lt Col Charles Talley and possibly even Col Richard Greenwood. Evidence of this is recorded in Bell’s own letter provided in the second attachment.

In response, Wing and Regional CAP officers maneuvered to block Maj Bell’s complaint with a preemptive counter complaint coaxed from a cadet who attended a June 2013 Region Cadet Leadership School in Knoxville with Maj Bell.

Although evidence was insufficient and the cadet was reticent, the complaint was encouraged and facilitated by Lt Col Dent Young, a Tennessee Wing IG who, unofficially and without duty position assignment, served Col Al Bedgood in Southeast Region Command. Dent Young was found to be personal friend of the Knight family in Georgia who had improperly leaked information to Lt Col Joe Knight III during a 2012-2013 investigation that led to Joe Knight’s suspension from Civil Air Patrol for his role in threatening an FAA Flight Instructor. See Figure #2.

The termination process against Bell was initiated by none-other than Col Richard Greenwood, Georgia Wing Commander.

Suspecting foul-play, Maj Bell requested that the termination hearing be taken completely out of Southeast Region influence. A hearing for Maj Bell was not scheduled until a FULL YEAR LATER in June of 2014 to take place on July 11th. This violated CAP regulations and showed the deliberate effort to ensure Col Greenwood would complete his probationary year without incident.

In further violation of CAP regulations, the hearing committee’s findings on the counter-complaint were left unaddressed for more than EIGHT MONTHS. During this period, Maj Bell made multiple attempts to inquire of the outcome with Col Karton, but his communications were ignored. See Figure #4.

This is Maj Michael Bell from GAWG. A board was held concerning my appeal of termination from Civil Air Patrol on June 11, 2014 by members from the GLR [Great Lakes Region]. I am concerned because it has been 90 days and I have not heard anything from anyone. CAPR 35-3 says usually after 3 days of the board the Approving authority makes his/her decision.

I would like to know if I have missed anything. Thank you for your time on this matter sir. 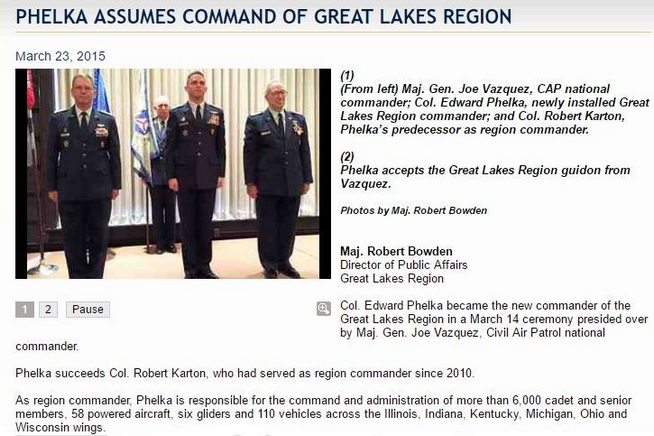 Maj Bell was quietly reinstated in March of 2015, but without any of the necessary paperwork stating the findings of the hearing or the required written decision of Col Robert M. Karton. He simply re-appeared on his squadron’s roster at Fulton County Composite Squadron. Those familiar with Georgia Wing and prior accusations against Col Greenwood, understand this dynamic completely.

Maj Bell recorded the lack of appropriate paperwork and immediately resumed his attempt to expose and correct the problems with racism and disability discrimination among Georgia Wing pilots and commanders. He had collected many evidence items from people in different units in Georgia Wing.

On May 25th 2015, he circulated an email and a letter that he sent to multiple people, including the CAP/EO, the U.S. Air Force IG and to Congress.

Here is the most important extract from Maj Bell’s Letter:

“This process should take around 30 days. I waited and I waited for months and heard nothing from the approving authority. I emailed him three times. I called National Headquarters where a full time staff works.

In March 2015, I was contacted by one of my Squadron members and told my name was back on the roster. I verified this and it was true. So, I am an active member once again. But I never received a formal disposition of the case. The regulations require this.

Lt Col Charles Talley: Told me I should find an “all black” Squadron to command.

Lt Col John Aden: For not disciplining Lt Col Talley for his remarks, and for removing me as Deputy Group Commander with no explanation and for threatening to move and sub sequentially removing the aircraft from Fulton County Airport where Fulton Squadron maintained it citing it wasn’t be flown enough yet, he put it in Cobb County and it still isn’t flying much yet he didn’t threaten that Squadron like he did Fulton.

Col Richard Greenwood: He made comments about my disability and was heard saying he would never put me in command because of it. I believe he orchestrated this entire complaint issue. The female cadet herself did not make a complaint or it would have come down from the school Director. I believe Col Greenwood or someone he put up to manipulated this young lady.” 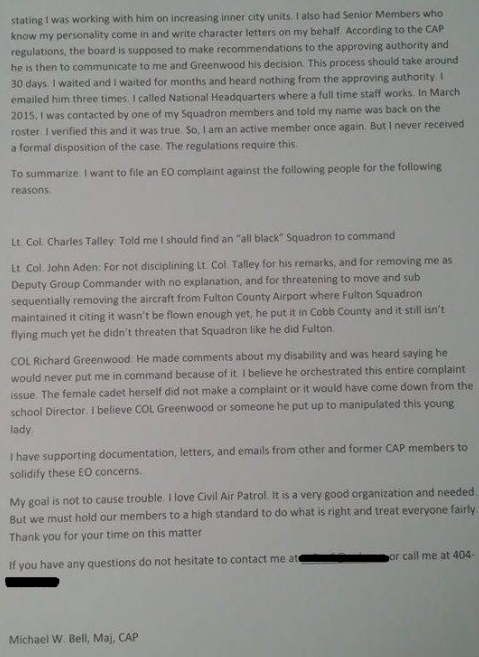