In typical Debbie James style, the outgoing Secretary of the Air Force has started saying a mercilessly long-winded goodbye. With two months or so left of work to do, she’s already started making the media rounds to shore up her image and manicure her legacy, first appearing on the Daily Show and later granting access for a lame bit of hagiography from Breaking Defense.

Professor James advises her successor to watch out for the unexpected. Wow, Debbie. Come up with that one all by yourself, or did you have help from Forrest Gump?

Public officials have been repeating this trope for decades. It’s basically Donald Rumsfeld’s public epitaph. But Debbie wields it with the voluminous vapidity of a J. Crew model starring in another dumbass rendition of the Mannequin Challenge. Under her hand, idiocy like this is celebrated while things like the Ice Bucket Challenge are outlawed. Ever thus to the unfortunate subjects of bureaucratic arbitrariness unchained from any sense of true leadership. 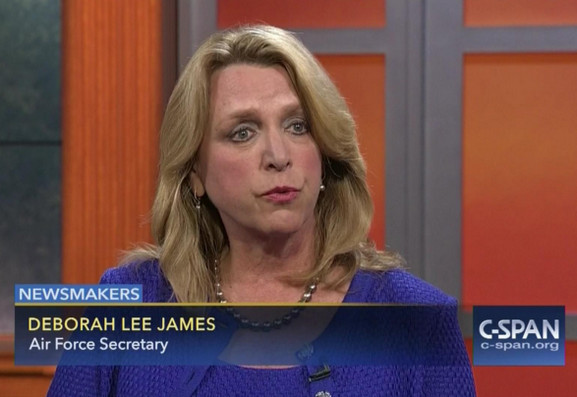 James also counsels transparency, reciting hackneyed managerial mumbo-jumbo about bad news not aging well. This is hilarious “advice” coming from someone who took the Air Force to new depths of politicization and opacity. On her watch, airmen were dis-invited from discussions about the future of their own service and relegated to plebe status. The resulting starvation of common sense fueled one failed personnel policy after another. Her minions substituted public relations for policy time and again.

On her watch, the service lied to Congress serially to the point that the Chief of Staff was essentially “shushed” in a nationally televised hearing by the Chairman of the Senate Armed Services Committee. Fascists who rode flank for her in the creation of a “shut up and color” culture were at least forgiven and usually rewarded. Maj Gen James Post falsely accused officers of treason and was given a cool new position at the Pentagon. Col Brian Hastings ruined a dozen lives with an unhinged extralegal witch hunt and got his first star. Gen Robin Rand cultivated mass toxicity in the service’s training command and was rewarded with control of all Air Force nukes. The list is long, but undistinguished.

Let’s not forget the trophies for ineptitude she handed out like muffins at a compulsory Top Three bake sale. Gen Mark Welsh lied to Congress by saying morale was “pretty darn good” and was nevertheless regaled with a 12-chariot tribute and a taxpayer-funded world tour when his time came to retire, never a speck of accountability visible in the public record. Lt Gen Gina Grosso “misplaced” a morale and welfare survey critical to the service’s understanding of just how far south of “pretty darn good” things were … and yet was given a position making her responsible for service-wide morale and welfare programs. Luckily, the survey was only misplaced for two years, and utterly useless by the time it was analysed.

And let’s also not forget about Peter principled E-9s like “Big Momma” Shelina Frey, who left behind a trail of obliterated morale on consecutive assignments in Qatar and Korea and was rewarded with the senior enlisted billet in Air Mobility Command, where she has already showcased her cluelessness. Notably, Frey visited Al Udeid Air Base last year during the unfolding mold scandal at the base and proceeded to tell airmen in her audience that their problems weren’t that bad. That alone should have disqualified her from any future “Command Chief” role.

On James’s watch, the Air Force broke its own spine by trying to shoulder too much weight without the mass to carry it. She leaves behind a 100,000-person staffing shortage and a pilot retention crisis that have Russia and China licking their chops with anticipation. All precisely because the Air Force under Debbie James refused to openly confront its problems.

Be first to comment on "Debbie James, Please Just Go Away Already"