[Editor’s Note: This morning we received this from an anonymous contact. Thank you for your contribution.]

Frank Blazich – Who can spot the errors in this graphic? Hint, there are multiple factual errors in the text. [see graphic above]

Glenn [Redacted] – You scared me, I thought there was a typo in the logo.

Frank Blazich – HAHA, no the logo is the one ACCURATE element here!

Paul [Redacted] – LaGuardia established CAP via his role in the Office of Civilian Defense and we didn’t become an auxiliary until after the Air Force became a separate branch in 47.

Frank Blazich – You could be 16 and join CAP in December 1941, Office of CIVILian Defense during World War II, became aux of USAAF in mid-1943 (after Executive Order 9339, and it was LaGuardia who established CAP by administrative order, not FDR. CAP (NHQ really) was founded 1 December, but legally established 8 December.

Frank Blazich – All someone had to do was ask and this would have been a simple 5 minute email to catch the errors.

George [Redacted] – Frank, the attached article taken from the Pittsburg Press newspaper June 14, 1942 is one example of your research that Civil Air Patrol had members as young as 16 years of age.

Frank Blazich – Top of the right column from the December 1941 pamphlet. 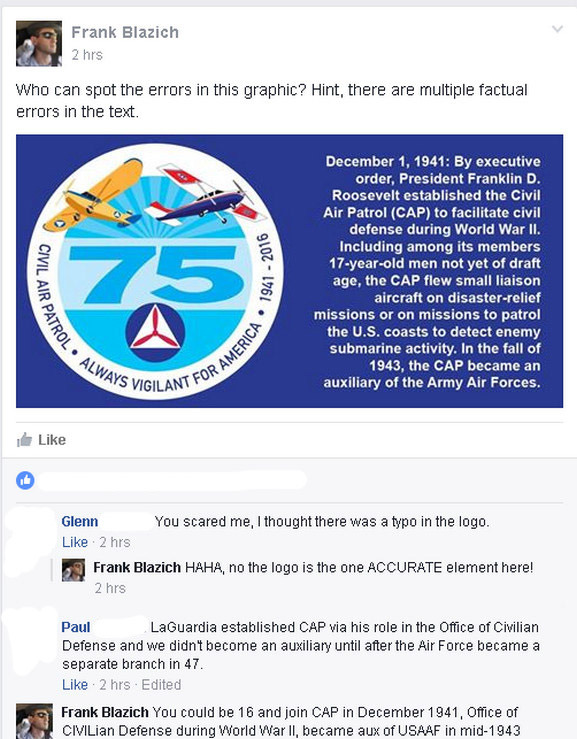 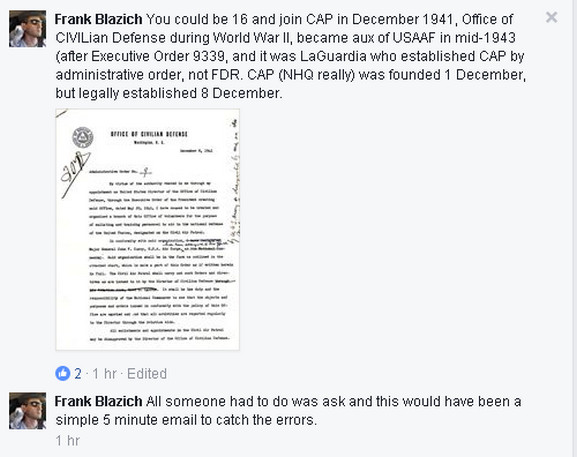