[Editor’s Note: Our readers had been asking us to add former US Congressman Steve Stockman (R-TX) to the Civil Air Patrol menagerie but only recently did we receive a contribution from TBirdHawk proving that he had been made a member of Civil Air Patrol, which is included below.]

Civil Air Patrol’s Steve Stockman has been sentenced following his April 2018 conviction of 23 counts of mail fraud, wire fraud, money laundering and making false statements to the Federal Election Commission. Specifically, he solicited $1.25 million in donations based on false pretenses, using funds intended for charities to cover personal expenses and to further his political aspirations.

The Texas Republican was first elected to represent Texas’ 9th district in the 1994 GOP revolution, but earned a record that sped his unseating two years later.

He was elected to represent the 36th Congressional district in 2012 but left to run a failed campaign for the Senate.

“Former Representative Stockman stole hundreds of thousands of dollars from charities, then used the money to pay personal expenses and fund his political campaigns. this case demonstrates, the Justice Department and our law enforcement partners will aggressively pursue corrupt public officials, including those who seek to corrupt our elections for personal gain.”

“Congressman Stockman used his position to defraud charitable foundations to advance his political career and pay for personal expenses,” Special Agent in Charge D. Richard Goss of the IRS Criminal Investigation said. “His actions and failure to pay taxes on these illicit funds not only undermines the American tax system, but cultivates a lack of trust in our elected officials.”

In 1995, Civil Air Patrol inducted Steve Stockman into the Congressional Squadron of Civil Air Patrol with the rank of Lt Col at an awards ceremony at the terminal building of what was then Jefferson County Airport, now Jack Brooks Regional Airport. 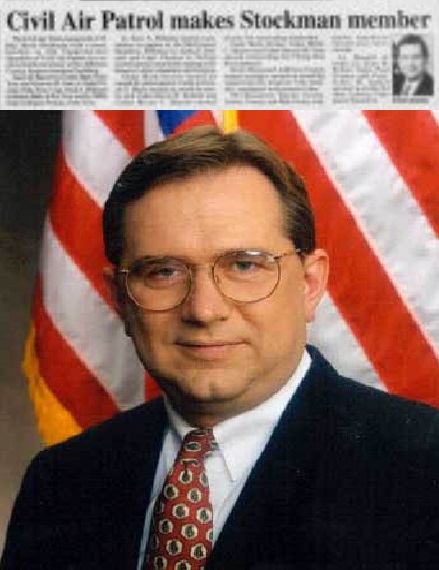 The December 25th 1995 article in the Port Arthur News read as follows:

The Civil Air Patrol presented U.S. Rep. Steve Stockman with a membership to the Congressional Squadron of Civil Air Patrol at a recent awards ceremony at the Jefferson County Airport terminal building.