[Editor’s Note: This article was sent to us in late July 2019 along with related comments with one suggesting that we have our hand up firmly up Mark Smith’s puppet channel. Thank you for your contribution.]

After being formally denounced for his antisemitism, Civil Air Patrol’s head Chaplain Charlie Sattgast is proposing that Civil Air Patrol pilots are in need of remedial ethics training.

The general order that established the CAP Chaplain Corps on 4 April, 1950 specifically directs
chaplains to “make frequent character guidance lectures to cadets and senior personnel.” For a number of years character education was taught to all CAP members, but decades ago the senior member component of the character program was phased out. This raises a couple relevant questions: Has the discontinuation of character education for senior members had a negative effect on Civil Air Patrol, and would senior members benefit from a new, well-designed character program? 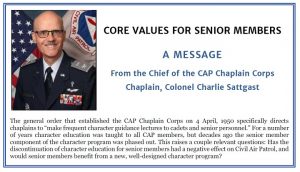 Charlie Sattgast has an idea

The fact that Charlie Sattgast was unable to recognize the many confessions placed into the Roman New Testament as to the purpose and sourcing of the narratives speaks volumes about his personal lack of character.

More importantly, I wonder how this will be received by wannabe rape-song Air Force fighter pilots in the know? What reaction is expected from Civil Air Patrol pilots who forge documents and bilk US taxpayers for free flying time toward maintaining currency and the hours needed for their Commercial Pilot’s Licenses?