[Editor’s note: Someone provided AuxBeacon this summary of last night’s results. Thank you for your assistance.  We have been overloaded with new inquiries and new stories that are being researched.]

Gov. Edwards is a graduate of West Point and one of the few Democratic governors in the South.

Because Edwards received less than 50% of the vote, he and Rispone now advance to the runoff election scheduled for November 16th.

Reports from the GOP rally in Louisiana with Ralph Abraham and Donald Trump revealed a father teaching his toddler how to ignorantly boo the Fourth Estate so that evidence of crime uncovered by that institution will be discounted by the public in President Trump’s favor. 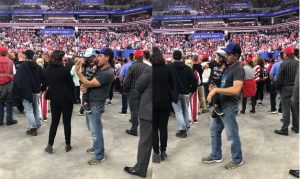 Trump supporter teaches his child how to ignorantly boo the media.

Abraham’s loss leaves some of his supporters wondering why God would abandon him, others seem to know.