Civil Air Patrol member Eric Boe has been removed from the role of test pilot for the Boeing CST-100 Starliner commercial crew ship. According to NASA Boe was removed from the mission due to unspecified medical issues and will be replaced by veteran astronaut Mike Fincke.

Boe is being reassigned to Johnson Space Center where he will assume Fincke’s position as assistant to the chief for commercial crew operations.

In compliance with NASA policy regarding medical privacy, no details explaining the reason for Boe’s reassignment were provided. 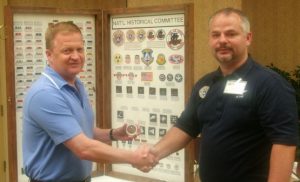 Boe received his Civil Air Patrol Amelia Earhart award (featured) from Georgia Congressman New Gingrich in 1982. Gingrich would later be reprimanded by the United States House of Representatives in 1997 for ethics violations and required to pay a $300,000 penalty to reimburse the House for certain costs of the investigation. This marked the very first time a United States Speaker of the House was disciplined for an ethics violation.