[Editor’s Note: We are overloaded with story suggestions. Please consider writing your own article and giving us permission to edit or add to it. That will speed the disclosure of what Civil Air Patrol has been doing. Thank you to Palmetto Patriot for seizing the opportunity to report on this. We will add the individual events in sequence as time permits]

January 14, 2019: An AuxBeacon reader comments to provide this verified tweet from Andre Bauer. 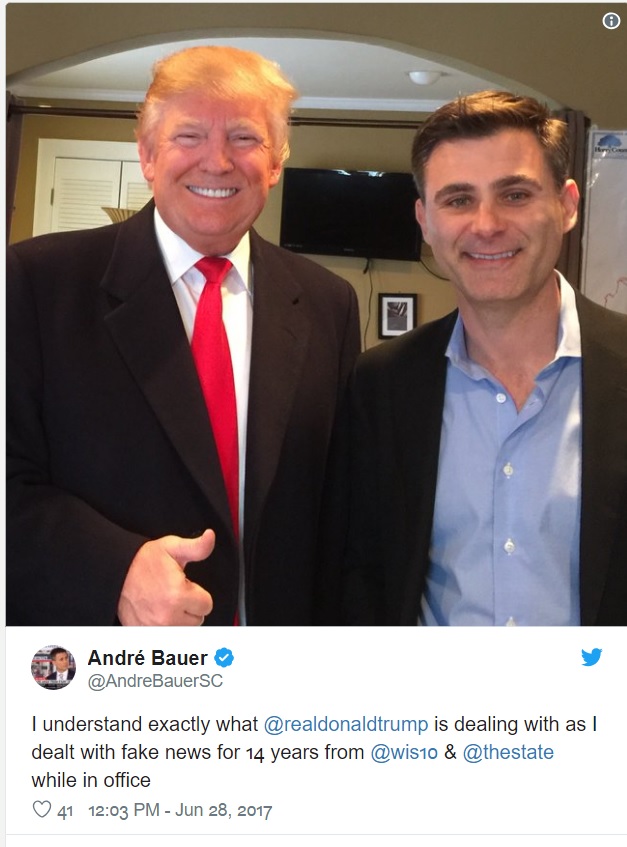 I saw you published my comment, so I thought I would try to take it a little further to show how some elected officials can suffer from gone-to-the-head-itis after immersing their egos in para-military and aviation groups like Civil Air Patrol.

In January 2010, Civil Air Patrol’s Lt Col André Bauer made the following statement in a town hall meeting comparing public school children who receive free lunches to stray animals who should not be fed.

“My grandmother was not a highly educated woman, but she told me as a small child to quit feeding stray animals, You know why? Because they breed. You’re facilitating the problem if you give an animal or a person ample food supply. They will reproduce, especially ones that don’t… think too much further than that. And so what you’ve got to do is you’ve got to curtail that type of behavior. They don’t know any better.”

It was later reported that Lt Col Andre Bauer Civil Air Patrol was himself a child of divorce who benefited from free lunches.

Even though Mike Huckabee endorsed him, Andre Bauer was defeated in the Republican primary in June 2010.

On May 6, 2003, Lt Col André Bauer CAP was stopped on Assembly Street in downtown Columbia, South Carolina, for running two red lights and speeding up to 60 mph in a 35-mph zone. The officer drew his gun after Bauer got out of the car and began heading toward the officer’s car in an “aggressive manner.” He was issued a ticket for reckless driving.

On February 25, 2006, Lt Col André Bauer was stopped for speeding over 100 mph in Chester County, South Carolina in a state-issued car, but he was allowed to proceed without a ticket or warning.

On May 23, 2006, Lt Col Andre Bauer was injured in the crash of a single-engine Mooney M20E, TailNo N3217F and registered to Bunk that he piloted off too-short an airfield in Blacksburg, South Carolina. Bauer and his passenger escaped the wreckage before the plane caught fire.

The NTSB post-investigation final report provided the Probable Cause and Findings as:

Probable Cause and Findings
The National Transportation Safety Board determines the probable cause(s) of this accident to be:
The pilot’s failure to abort the takeoff after the airplane failed to achieve adequate airspeed on the takeoff roll for undetermined reasons. This resulted in an abrupt pull up, inadvertent stall, and in flight collision with wires, trees and the ground.

Content of the NTSB’s post-investigation factual report indicated that correct procedures should have revealed that the airfield was too short to safely depart. The findings section only addressed Bauer’s “failure to abort the takeoff after the airplane failed to achieve adequate airspeed on the takeoff roll for undetermined reasons.”

According to FAA regulations, “[t]he pilot in command of an aircraft is directly responsible for… the operation of that aircraft” including determining if the aircraft is in airworthy condition and properly making the decision to abort takeoff in time to avoid a crash.

From the final NTSB report:

The private airstrip at Blacksburg, South Carolina, is not registered with the Federal Aviation Administration or with the State of South Carolina. The FAA investigator on scene measured the grass and dirt runway. The runway is 1,383 feet long and 80 wide. The elevation at the airport is 850 feet and the runway direction is 240-degrees and 06-degrees magnetic.

The pilot stated he did not compute any performance data for landing or takeoff from the private airstrip at Blacksburg, South Carolina.

A June 11, 2009 court ruling from Administrative Judge Richard C. Goodwin concluded that “By overhauling the engine and returning it to service with incorrect bolts installed, respondent created an unnecessary risk in engine performance.” This in no way relieved Civil Air Patrol’s Lt Col André Bauer of his being responsible for this destructive crash.