[Editor’s Note: We received info regarding this crash. Thank you for your contribution. This CAP plane crash in Michigan was attributed to pilot error.]

Capt. Victor Evans set the passenger craft down safely after the collision which crumpled a wing tip on the big plane and sent the smaller machine out of control.

Donald Gridley, Ypsilanti, pilot of the CAP trainer, and his student, Miss Eleanor Cramer, 18, also of Ypsilanti, jumped while their plane was 1,200 feet off the ground. It was Miss Cramer’s first jump. 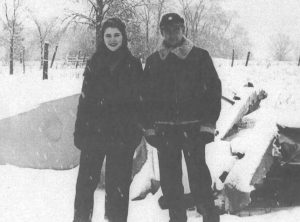 The CAP plane crashed near 5521 Thomas Road about four miles south of Ann Arbor while the airliner was guided to earth in a field near 1330 Willis Rd. not far from the Ypsilanti State Hospital. Gridley and his student landed near the CAP plane.

The air-liner, on the New York-Chicago run, was carrying 15 passengers, a three-person crew, and considerable mail cargo. Passengers stayed briefly at a farm home near where their ship had been landed and then were transported to the Willow Run airport where another air-liner later picked them up to continue the journey.

Gridley told investigating officers that he had “just finished a regular instructional flight when I heard a bursting noise and found the tail of my plane gone.

Makes First Jump: “I decided to abandon the plane and told Miss Cramer to bail out. It was the first time she had ever worn a parachute but as soon as she realized the difficulty she went over the side at 1,200 feet. I saw the air-liner a mile ahead of us but I didn’t realize it had hit us or that it was in trouble.”

Sheriff’s officers reported that they were told by the air-liner co-pilot, J. Richard Lyons, that the CAP plane came down from above and that a piece of its landing gear hit one of the transport’s wings. Passengers on the bigger plane were eating lunch at the time and quickly fastened safety belts being cautioned to do so by Miss Mary L. Brauer, Stwardess.

CAP authorities said they would make an investigation of the accident. Lyons, co-pilot for the air-liner is a native of Owosso and a graduate of the University. He was formerly an instructor at the Ann Arbor airport.

– The Ypsilanti Daily Press for December of 1944

The rest of the story as told to George Ridenour by Ms. Eleanor (Cramer) Rose:

On a recent cloudy, blustery, winter day we met Ms. Rose at her apartment complex in the old Ypsilanti High School. Her eyes twinkled, she held a steady smile, and spoke in a clear voice about her adventure on Christmas Eve, 1944. You could tell and sources confirm that there is no one quite like “Ellie!”

She indicated she was 18 years old and on a training mission for her license. She was flying out of an airport near Munger Road in Ypsilanti that was used by Don Gridley, Civil Air Patrol pilot, instructor, and neighbor of Ms. Rose. She had urged him to take her up for a final lesson.

Before boarding the aircraft, he asked her to put a parachute on because part of her flying lesson would include learning how to recover from a tailspin and a parachute was mandatory gear. She was tall and with the parachute on remembers her head hitting the top of the cabin and being uncomfortable. However, she did enjoy flying and was determined that she would get her license.

She remembers hearing a noise like a loud “thud” which turned out to be the tail coming off her aircraft. There had been a collision between the Civil Air Patrol plane and a DC-3 American Air Transport airliner, carrying mostly servicemen. The airplane with Rose and Gridley was severely damaged and the American Airliner was able to make a belly-landing in a field near Willis Road near Ypsilanti State Hospital.

She remembers how beautiful it was with the deep snow and was able to see for miles. She knew that Don had jumped and also knew that the plane they had been in was on fire. She was frightened that she might come down in trees or worse electric wires. Also, she had never had instructions on “how to guide” the parachute.

The Civil Air Patrol Plane was a total loss. The FAA and Civil Air Patrol did countless investigations and interviews to determine the cause of the accident. Don Gridley was eventually exonerated in the crash.

At the age of 17, Miss Cramer had come to Ypsilanti to visit her aunt and uncle living on Oak Street. She had grown up and attended school in her native Montana. While here, the aunt and uncle who had no children asked her to stay with them. She agreed. She met Don Gridley who was a neighbor and flying enthusiast and that is how she developed her interest and came to be in the plane that Christmas Eve, 1944.

The incident did not stop “Ellie” from getting in a plane two days later. However, when she tried to take off, the airplane’s skis got stuck in the snow on the runway and the nose tipped down and the propeller broke off. At that point, Rose’s ambition to become a pilot ended and she traded her interest in flying for downhill skiing. However, Christmas Eve from 1944 to the present has been enthusiastically celebrated and remembered by Eleanor “Ellie” (Cramer) Rose and her family.