[Editor’s Note: We received this information a few days ago through both comment and contact form. As sufficient evidence is provided to support this story we are releasing it as provided.]

I am an active member of Washington Wing Civil Air Patrol and I would like to thumb my nose at new Civil Air Patrol regulations and policies and especially at WAWG commanders Shelly Norman and Ken Butler by giving you this story.

A few days after the Kavanaugh Kerfuffle, Seattle resident Candace Faber tweeted that state senator Joseph Fain, a Civil Air Patrol advocate and assumed legislative squadron member, raped her in 2007 in a Washington, D.C., hotel room on the night she received her master’s degree. Faber has said there are witnesses who would corroborate her whereabouts that night, and that she has evidence that she was in Fain’s hotel room that night.

you raped me the night I graduated from Georgetown in 2007. Then you had the audacity to ask me to support your campaign. I’ve been terrified of running into you since moving home and seeing your name everywhere. I’m done being silent.” 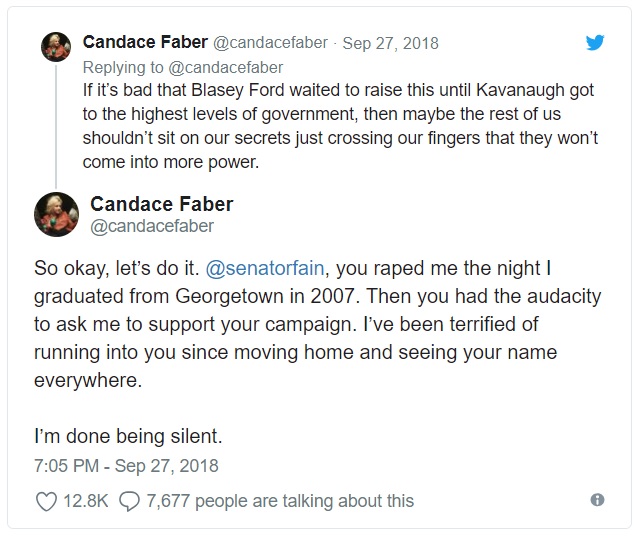 Fain denied the allegations and called for an investigation into the claims and Governor Jay Inslee responded to the claims, stating, “this is a very serious allegation that unquestionably deserves a full investigation by law enforcement officials.”

I agree with many of those writing in to AuxBeacon that Civil Air Patrol is being used as a tool in rural areas to brainwash, groom and desensitize young people toward backward beliefs, and economic and social policies that are unhealthy for our nation. Rural chieftains support anti-journalism, racism and antisemitism in order to frighten those who are attempting to reveal this.

If you release this story, I will provide you with more details on what I have encountered in Civil Air Patrol.