[Editor’s Note: We received an anonymous tip regarding this crash. Thank you for your contribution. This CAP plane crash in Georgia was attributed to pilot error.]

On July 21, 2008, at 1030 eastern daylight time, a Maule MT-7-235, N142CP, nosed over during landing roll at Richard B. Russell Airport (RMG), Rome, Georgia. The airplane was substantially damaged. The airline transport pilot was not injured. Visual meteorological conditions prevailed at the time of the accident, and no flight plan was filed for the personal flight. The airplane was registered to and operated by the Civil Air Patrol Incorporated, under the provisions of Title 14 Code of Federal Regulations (CFR) Part 91. The flight departed from RMG the same day at 1015.

The pilot stated that during the initial touchdown, the nose gear collapsed. He said that as the airplane slowed down, the propeller dug into the ground and the airplane stopped suddenly and nosed over inverted.

Examination of the airplane by a Federal Aviation Administration inspector revealed that the nose gear oleo strut was broken, and the firewall was buckled. The nose gear oleo strut was sent to the National Transportation Safety Board materials laboratory for further examination. Examination of the oleo strut revealed that all of the fractures were on a slant plane, and were consistent with overstress fracture. There was no indication of any pre-existing fatigue cracking or corrosion.

Probable Cause
The pilot’s improper landing flare which resulted in a hard landing. 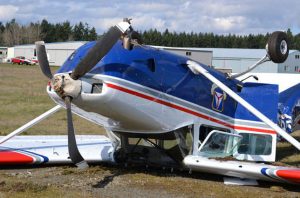