Michael Krauss is one scary excuse for a person.

Michael Krauss was arrested as part of our Livingston County, Michigan sting in August, 2009. Yes, that really wasn’t very long ago! It didn’t take him very long to plead guilty to a charge of using a computer to commit the crime of child sexual abusive commercial activity. He received a sentence of 16 months to 20 years in prison. He also had to register as a Registered Sex Offender (RSO).

Less two minutes into this chat, 49 year old Michael Thomas Krauss, was trying to find out where the child lived. Within five minutes, he had already started the sex talk and stated what he was going to do when he showed up to meet a child. This entire chat he states what he will do. He also asks for the child’s location every time we chatted. 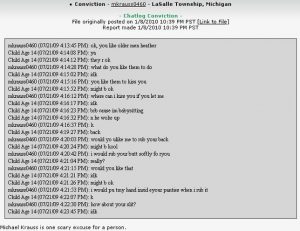 He spent 25 years in service to our country, yet he chooses to show up to rape a child. I find that very sad. He also volunteered for the Civil Air Patrol. I worry that he had access to children that attended the CAP program. I pray he did not.

When he showed, he asked those arresting him to let him go because of his time in the military and because he was a security guard. Of course, that did not happen. What did happen was that Michael Thomas Krauss was sentenced to 16 months to 20 years with the Michigan Department of Corrections with 153 days credit for time served. He was ordered to pay $68.00 state costs and $60.00 crime victim’s assessment. He was ordered to register as a sex offender.

I would like to thank Carmen for talking to this creep and giving him directions to the bust house when he got lost. She did a fantastic job. I also want to thank the Michigan Attorney General’s Office, for their proactive work in arresting and convicting child molesters and rapists.