[Editor’s Note: We received an anonymous tip regarding this crash. Thank you for your contribution. This CAP plane crash in Alaska was attributed to pilot error.]

On June 8, 1976 a few minutes after takeoff from Palmer, the CAP pilot elected to gain height when the de Havilland DHC-2 Beaver [N5141G] struck a mountain ridge and crashed. A passenger was killed while both other occupants were injured. The aircraft was destroyed.

Probable Cause:
Controlled flight into terrain after the aircraft was unable to out climb mountain ridge. 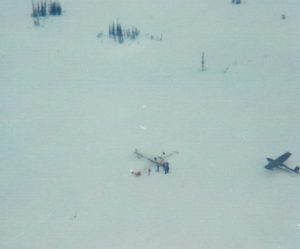