[Editor’s Note: Crisply and to the point, a cadet exposes the continued meltdown of one of Civil Air Patrol’s Region Commanders. As always, the image captions are the work of the staff. Thank you for your contribution. We also extend our heartfelt condolences to Jon Stokes for his losses.]

I am a cadet and member of Honor Guard in [redacted] Wing [Pacific Region] Civil Air Patrol. I just finished reading your articles about the dirty attacks on Capt Sullenberger and the recent attempts to wriggle more CAP-biased people into government roles of oversight and funding for their social clubbing. I would like to show Members of Congress and your readers somethings that are going on in [redacted] Civil Air Patrol. I know others have attempted to expose this with the people in Florida and Georgia Wings, but I think that by adding this to your records that you will be able to expose Mark E. Smith as a sneak who is encouraging this behavior but pretending he is unaware until some cadet calls him out on it like was done with Cadet Joe Basrawi.

First, please help me show Congress and your readers the paragraphs from CAPP 52-8 and CAPM 39-1. Please highlight the last sentence of this regulation so that it stands out because Maj Gen Smith and Col Stokes appear to be ignorant.

1.3.7. POLITICAL EVENTS. As outlined in CAPM 39-1, chapter 1, CAP members are prohibited from participating in political rallies, campaign events, or similar activities that have a partisan nature, while in uniform. However, CAP Honor Guards may participate in non-partisan events that happen to include political figures who are appearing as part of their official duties (e.g. when the governor is dedicating a new airport). Honor Guard instructors are encouraged to teach cadets the democratic principle of civil control of the military, and

why it is INAPPROPRIATE for the armed services, including CAP as an Air Force Auxiliary, to appear to endorse one political candidate, political cause, or political faction over another.

Second, show the quality of our Pacific Region Commander. 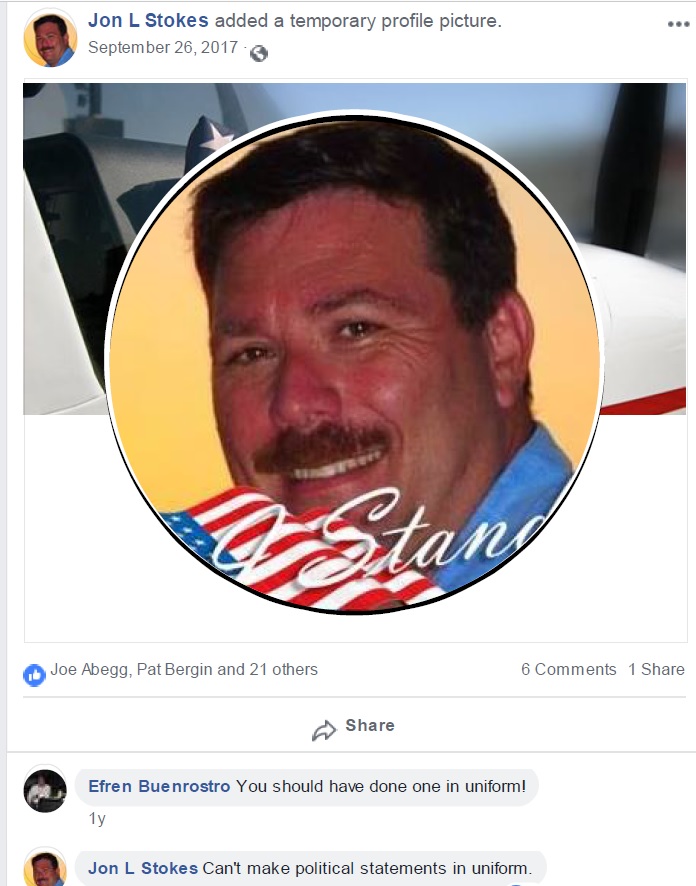 A bloated Jon L. Stokes is ignorant of regulation details.

Third, point out that his Facebook page is loaded with his Civil Air Patrol influence and connections. 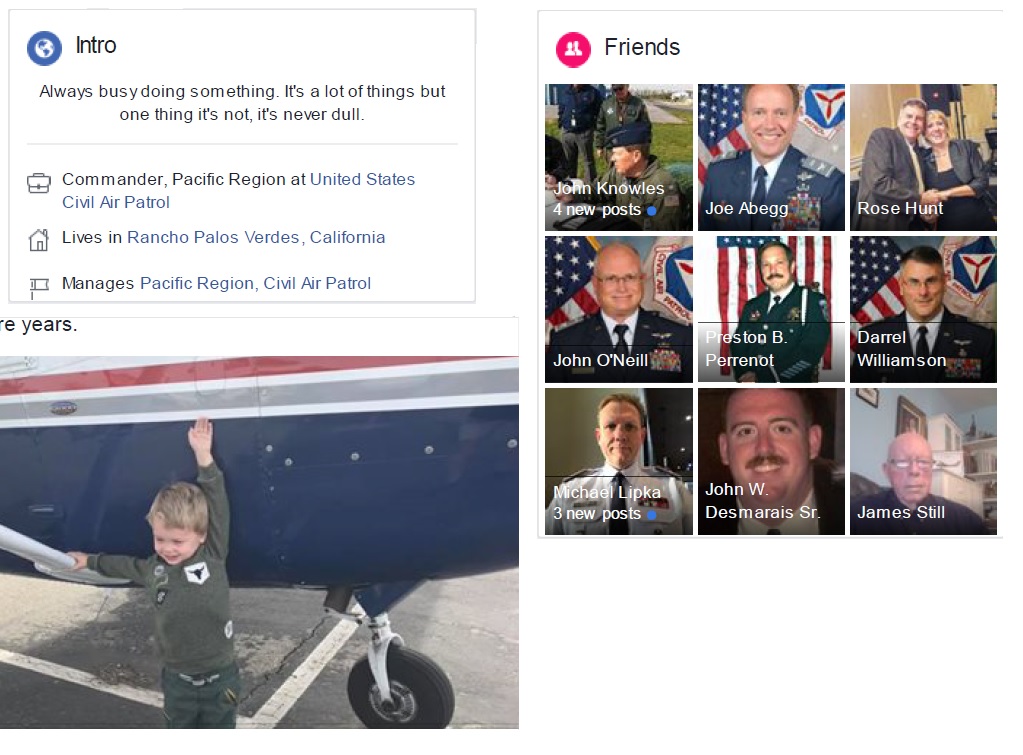 CAP Col Jon L. Stokes vomits the bile of his mind on a page of Civil Air Patrol connections & influence. 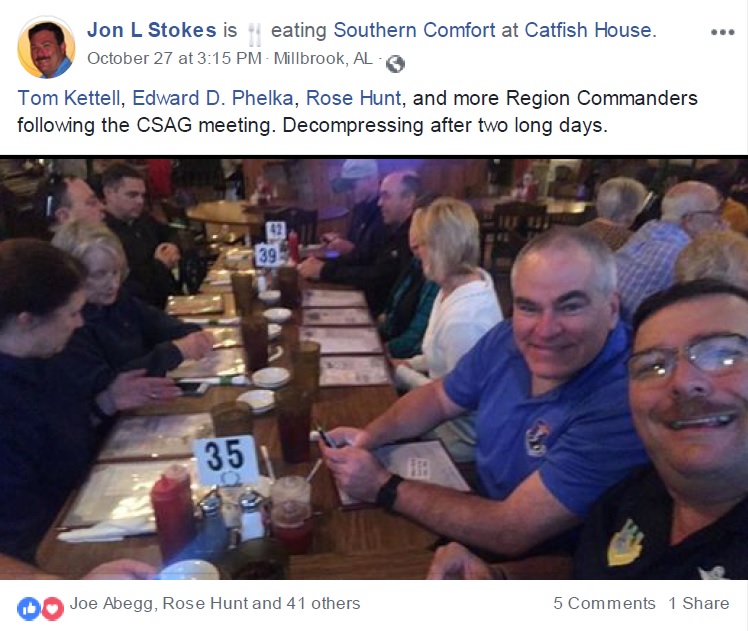 Eschewing pork and government cheese, at least for the day, Civil Air Patrol dines on other bottom dwellers.

Fourth, show the members that he is a more polished turd than someone like the Kansas guy or Larry Julian. 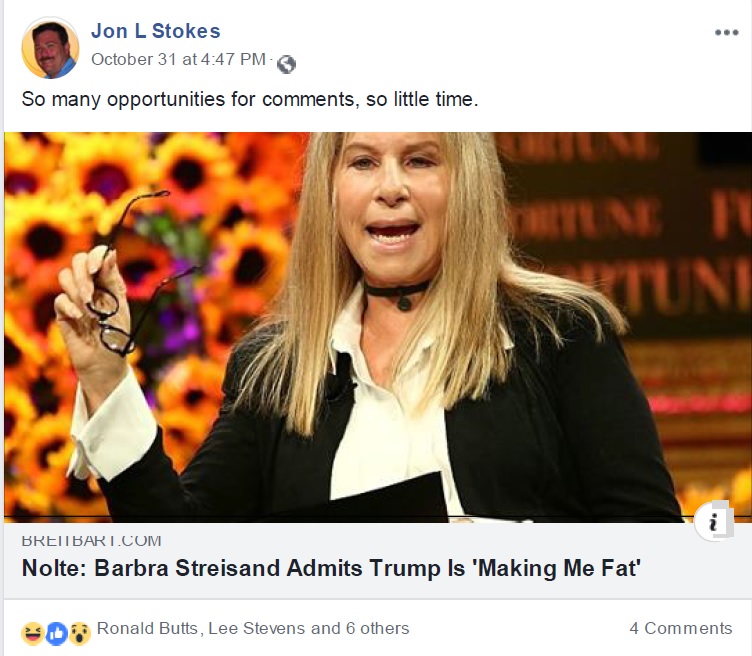 Finally, allow the membership to see his words on the day before the midterm election. 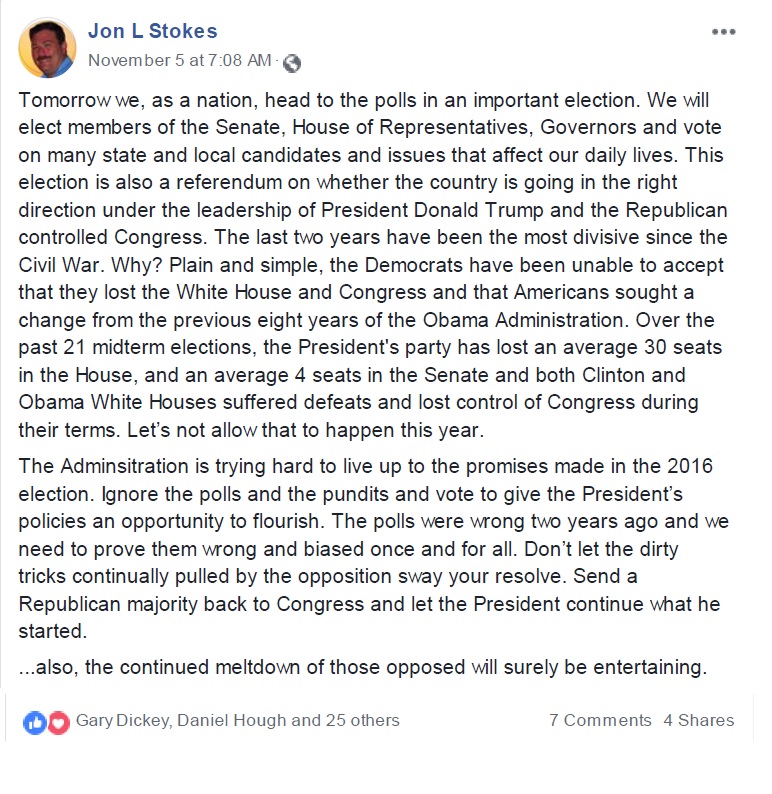 Tomorrow we, as a nation, head to the polls in an important election. We will elect members of the Senate, House of Representatives, Governors and vote on many state and local candidates and issues that affect our daily lives. This election is also a referendum on whether the country is going in the right direction under the leadership of President Donald Trump and the Republican controlled Congress.

The last two years have been the most divisive since the Civil War. Why? Plain and simple, the Democrats have been unable to accept that they lost the White House and Congress and that Americans sought a change from the previous eight years of the Obama Administration. Over the past 21 midterm elections, the President’s party has lost an average 30 seats in the House, and an average 4 seats in the Senate and both Clinton and Obama White Houses suffered defeats and lost control of Congress during
their terms. Let’s not allow that to happen this year.

The Adminsitration (sic) is trying hard to live up to the promises made in the 2016 election. Ignore the polls and the pundits and vote to give the President’s policies an opportunity to flourish. The polls were wrong two years ago and we need to prove them wrong and biased once and for all. Don’t let the dirty tricks continually pulled by the opposition sway your resolve. Send a Republican majority back to Congress and let the President continue what he started.

…also, the continued meltdown of those opposed will surely be entertaining.

I don’t know how your editors will rule on this summary and question. If you need to remove it, feel free.

Col Stokes’ words do not seem like quality leadership to us. Rumors have circulated that Jon L. Stokes is a student pilot in name only and that he is really a CPP-certified male escort, of the security variety. Can you or your readers help verify this?

If so, why should Civil Air Patrol cadets listen to anything this man has to say over a leader like Captain Chesley Sullenberger III who expressed the opposite view? 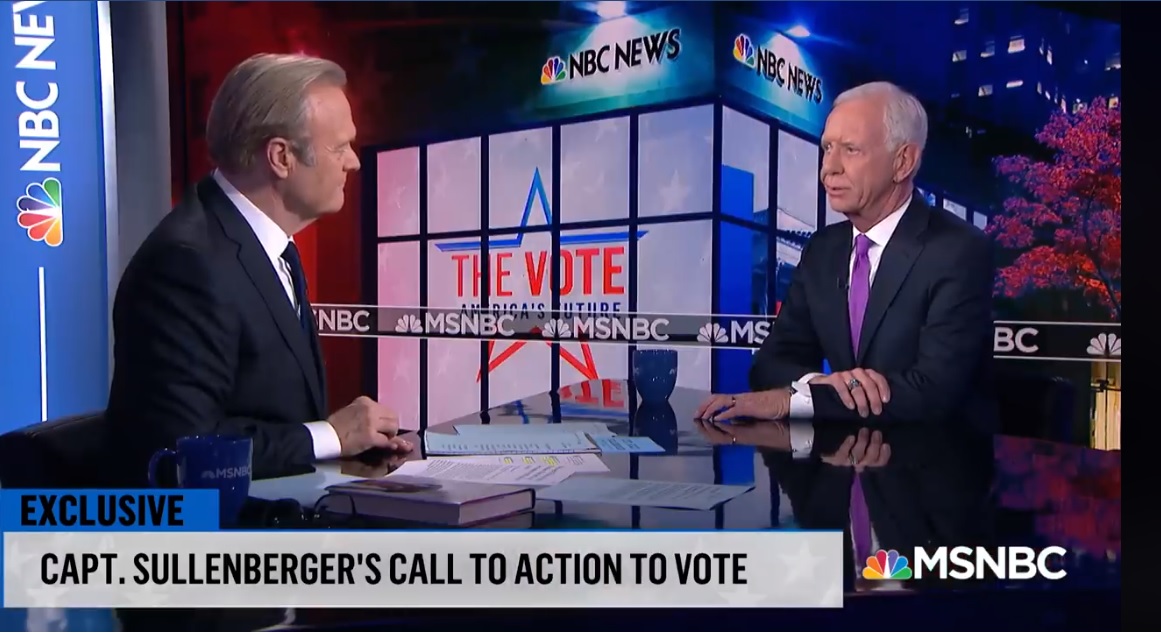