[Editor’s Note: The AuxBeacon team never would have seen this without the help of these Civil Air Patrol cadets. Thank you for your contribution.]

Our old IA-007 “buddy” Adam Wachholz (Northwest Iowa Composite Squadron) is not going to be happy that we are giving you this. Look him up, you’ll see why. However, we are as concerned as you about the grooming and brainwashing that goes down in Civil Air Patrol. Your readers need to know that the disavowed white nationalist GOP Congressman Steve King has turned to using weak CAP members for photo-ops on his Facebook page to justify himself. Here’s how he’s played it soon after being stripped of committee duties in the House.

Just got back from the House floor, where I voted against the Pelosi Democrats 2nd Attempt in 2 days to undermine the 2nd Amendment.

Prior to today’s vote, I had the opportunity to meet with representatives of the Iowa Wing of the Civil Air Patrol. The Civil Air Patrol performs a number of important functions, and I am a supporter of the work that they do. (Photo below). 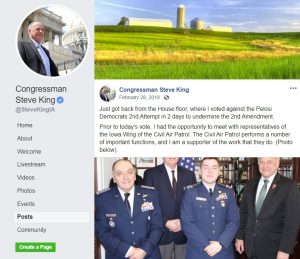 Note that [redacted] is smugly sporting an NRA Marksmanship Badge.

Please do what you can with this, sorry that we don’t have the time to write a complete story for you. Add or change whatever you need.

Over to you,
[Redacted on requeest]

We’ll just add the facts on Iowa Republican Congressman Steve King below. We’d then ask why any Civil Air Patrol member would pose with him for a photo unless they were ignorant and/or held white supremacist leanings themselves?

2002: While serving in the Iowa State Senate, Steve King filed a bill requiring schools to teach that the United States “is the unchallenged greatest nation in the world and that it has derived its strength from… Christianity, free enterprise capitalism and Western civilization.”

2012: On a panel at the Conservative Political Action Conference with Peter Brimelow, a white nationalist, Mr. King referred to multiculturalism as: “A tool for the Left to subdivide a culture and civilization into our own little ethnic enclaves and pit us against each other.”

2016: In the 2016 Republican presidential primaries, King endorsed Ted Cruz claiming that he was the “answer to my prayers”. King then strongly supported Donald Trump after he won the nomination.

2016: In October, Steve King was in Austria and met with leaders Heinz-Christian Strache and Norbert Hofer of the far-right Freedom Party of Austria. The Freedom Party was founded in 1956 and its first leader was Anton Reinthaller, a former Nazi functionary and SS officer.

2017: Steve King tweets his agreement with Hungary’s authoritarian leader Viktor Orban stating that “Mixing cultures will not lead to a higher quality of life but a lower one.”

2018: In October, Steve Stivers, chairman of the National Republican Congressional Committee, openly condemned King’s actions and comments as “completely inappropriate” constituting “white supremacy and hate.” The NRCC then took a position refusing to assist Steve King in his 2018 bid for re-election.

2019: In an interview with the New York Times, Steve King asked: “White nationalist, white supremacist, Western civilization — how did that language become offensive? Why did I sit in classes teaching me about the merits of our history and our civilization?”

“there is no place in the Republican Party, the Congress or the country for an ideology of racial supremacy of any kind. I have no tolerance for such positions and those who espouse these views are not supporters of American ideals and freedoms. Rep. King’s statements are unwelcome and unworthy of his elected position. If he doesn’t understand why ‘white supremacy’ is offensive, he should find another line of work.”

2019: Also in January, the Republican Steering Committee, not house democrats, strip Steve King of all his committee assignments.

With this photo – [redacted], [redacted] and Iowa Wing Commander Pastor Joseph Hackett have shed some light into a cockroach corner of Civil Air Patrol and the abysmal leadership soon to manifest from this quality of “training.”