[Editor’s Note: We received word of this tragic story from several of our readers during our unfortunate down time. We thank all of you for your continued contributions in addressing the national problem that is Civil Air Patrol.]

A federal investigative agency has released a preliminary report on the July 6th plane crash [N994CP] that killed an 18-year-old student pilot in Oxford, Mississippi.

The organization that was training the pilot, the Civil Air Patrol, said it’s too early to speculate on the cause of the crash.

The NTSB report quotes witnesses who said the pilot sounded “panicked” in communications with the control tower and that the plane made an aborted landing attempt, then rose sharply, turned and crashed onto a golf course.

The report cites a witness who said the pilot had attempted to land with a tailwind — that is, with the wind behind the airplane.

If the witness account is accurate, that’s a serious error because pilots are supposed to fly into the wind while landing to help slow down the airplane, according to Robert Katz, a Dallas flight instructor who frequently reads crash reports and discusses them with news media.

He said the report leads him to believe that the pilot had trouble finding the runway and approached from the wrong direction. He says that and other indicators in the recently released National Transportation Safety Board preliminary crash report suggest the student pilot’s crash, which occurred at the end of a solo flight that took off near Columbus, Mississippi and traveled to Oxford, could have been avoided.

Citing the preliminary nature of the crash report, J.F. Joseph, with Joseph Aviation Consulting, declined to offer a conclusion, though, he did say aviation investigators are likely to learn a great deal when inspecting the downed plane’s systems.

Eighteen-year-old Lake Little of Starkville, Mississippi, had recently graduated from high school and was planning to attend the University of Southern Mississippi. She dreamed of flying for FedEx — the company later sent commemorative wings to her family.

According to the NTSB report, Little had first received a student pilot certificate in August 2017, then received a third-class medical certificate in October 2018. That type of certificate is required for solo flights. At the time of the crash, she had logged 69.4 hours of flight time.

The preliminary investigation found the plane’s flaps appeared to have been retracted. Pilots deploy flaps when approaching a runway, because the flaps help provide more lift at slower speeds, Katz said. If the pilot retracted the flaps after the landing attempt, it would cause the plane to sink suddenly, he said. He believes that’s what happened in this case.

A witness at the golf course described seeing the airplane appearing to be “struggling” to maintain airspeed, with its nose up, and appearing to be very close to stalling, the NTSB report says.

The witness then saw the plane make a left turn and lose altitude. It struck the ground and slid up to nearby trees.

The pilot suffered serious burns in the crash, Ole Miss spokesman Rod Guajardo said in a statement earlier this month.

According to the NTSB report, bystanders and first responders tried to help the young pilot out of the cockpit, but her seatbelt and shoulder harness kept her inside. Then a fire started. Firefighters put it out and rescuers eventually extracted the pilot.

She was airlifted to a Memphis hospital, where she was later pronounced dead. 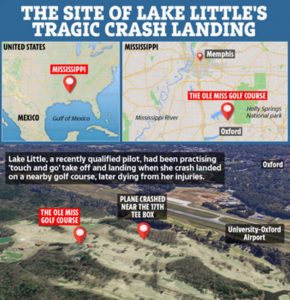