Viewing and funeral services for the Middletown, PA, teenager who committed suicide in Florida have been finalized and will be open to the public.

Rebecca Marseglia, 16, was found dead Thursday a mile from the Kissimmee, FL, motel she was staying at with the Civil Air Patrol group she was traveling with. She disappeared last Monday after being reprimanded and threatened with expulsion from the U.S. Air Force Auxiliary’s cadet program for having cigarette rolling papers.

A body that matched the description of a teenage girl on a Disney trip from Pennsylvania was found Thursday behind a Motel 6 across from the Old Town shopping, dining and amusement complex on tourist-friendly West U.S. Highway 192, authorities said.

Friends and family said an CAP adult from the unit had reprimanded her for an infraction right before she ran off. Becky was afraid she would be kicked out of the patrol and destroy her dream of going to the U.S. Military Academy at West Point and becoming an Army Ranger, said her stepmother, Paula Marseglia.

They believe a fear of disappointing her family and the pressure of trying to get into the U.S. Military Academy at West Point sent her running inconsolably into very dense woods Monday afternoon. She later ended her life in the woods near the Kissimmee, FL, hotel where she and other cadets had been staying since February 3.

Deputies from the Osceola County Sheriff’s Office found her between 8:30 and 8:45 a.m., Thursday, while checking the woods off West Highway 192. Deputies found her body hidden from view, hanging from a tree, amid dense woods about 30 yards from the highway, a main tourist thoroughfare.

“The body has been positively ID’d. The medical examiner has ruled it a suicide and it was by hanging,” said Lt Andy Lang, an officer investigating the case. The autopsy showed that the Neshaminy High junior died within 24 hours of when she went missing Monday, he said.

On Friday, her mother, Diane Marseglia, and other family members were trying to under-stand how a tough, driven, well-loved teen could meet such an end.

Like many teens, Becky aspired to reach lofty academic heights. She set a goal of scoring 1,200 on her SAT exams as part of a plan to be accepted into the U.S. Military Academy at West Point. Alas, she fell short of that goal.

Already despondent, Becky was reprimanded while in training for an infraction she likely thought would ruin her chances of getting into a military academy. That’s what her mother said she believes. Either way, she ran off in tears. It was the last time anyone saw her alive.

As you might have guessed from her career choice, Becky liked a challenge. “She was fearless,” her mother said. She played on Neshaminy’s varsity tennis team, belonged to two school community service clubs, had a role in the school play and belonged to a rugby club that her father coached. She planned to attend her junior prom.

So Becky was no wallflower. And from all appearances certainly not a candidate for suicide. She was gregarious and outgoing and stunning in her cadet uniform. She gave her family plenty to be happy about and proud of. And, now, much reason to grieve.

The viewing for the Neshaminy High School junior will be held today at the James J. Dougherty Funeral Home, 2200 Trenton Road, Levittown, PA, from 5 pm to 9 pm, EST.

The funeral services are scheduled for tomorrow at Morrisville Presbyterian Church, 771 N. Pennsylvania Ave, Levittown, starting at 10 am, EST. She will be buried at the Newtown Cemetery following the service. 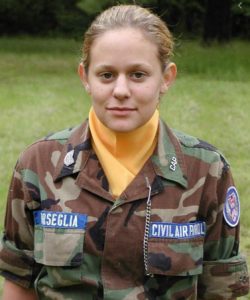 A Middletown, PA, family has been frantically searching for their 16-year-old daughter, who was reported missing while on a group trip in Florida.

Becky Marseglia, 16, was last seen Monday afternoon in Kissimmee, FL, by fellow members of the Civil Air Patrol. The group was preparing to return home after a weekend trip to Cape Canaveral and Walt Disney World, officials said.

“She was reprimanded for something minor by one of her lieutenants and ran into the bathroom crying,” said her mother, Diane Marseglia, a former Middletown supervisor. “No one’s seen her. Last time they saw her was Monday. Her father’s down there looking for her.”

Fellow Civil Air Patrol member J.J. Dennis of Langhorne, PA, said Becky went into the bathroom of the hotel to compose herself after the reprimand and that was the last time he saw her.

Marseglia said she fears her daughter has been abducted. She said she has taken out a home equity loan so she can offer a $10,000 reward for Becky’s return.

Minutes before the reprimand, a maintenance worker at the hotel where the group stayed told police he saw someone who looked like Becky. She was drinking a soda and laughing with two middle-aged men in a dark blue Chevy Silverado with a vanity license plate, said Lt Terrence “Terry” Loughran of the Civil Air Patrol.

The fact that she was talking to strangers doesn’t surprise Becky’s younger sister, 14-year-old Katey. “She’s not shy at all; she’s really outgoing and she acts really old,” Katey said.

The Neshaminy High School junior was last seen wearing dark jogging pants, black sandals and a short-sleeve shirt. She is believed to have been carrying only a few dollars.

Lt Pat McGinty of the Middletown (PA) Police Department said he contacted the investigating officer in the Osceola County (FL) Sheriff’s Office to offer assistance. He said Osceola officials have entered Becky’s name as a missing person in the National Crime Information Center.

Loughran and the search team have passed out fliers and checked hospitals, malls and downtown Walt Disney World, he said. “We’ve looked at teen hotspots — anything that would attract a teen,” said Loughran, who has known and trained Becky for the three years she’s been a cadet. “I’m a basket case. I’ve been working with Civil Air Patrol over 20 years and this has never happened.”

Loughran and 22 cadets left last Thursday for an educational, fun-filled trip. Everything was going smoothly until Becky went missing just before the group was to take the return flight home, Loughran said. The other cadets in the Civil Air Patrol, which is an auxiliary of the U.S. Air Force, flew home without her.

“Everybody’s traumatized. It’s almost surreal. Every day I wake up and wonder, “Is this really happening?” Loughran said.

He described Becky as a “street wise” teen with survival skills who knows how to take care of herself. Loughran said he doubts Becky was abducted.

Older cadets could join the search team this weekend if she isn’t found before then, he said. Loughran said he also hopes local Kissimmee and Osceola news media will report on the missing teen.

At the request of the family, Neshaminy High School officials made a school announcement Wednesday morning asking anyone with information about Becky’s disappearance to tell a school nurse or guidance counselor, said Sandy Costanzo, district spokeswoman.

Becky’s family and friends spent Wednesday afternoon frantically working the phones, calling shelters in Florida and talking to anyone who would listen.

“I think she freaked out about something and she’s scared to come home,” her sister Katey said. “I realize I miss hanging around her. We all love her and we miss her and want her to come home.”