[Editor’s note: Motivated by Ralph Abraham’s promotional use of the Air Force style uniform, an AuxBeacon reader has alerted us (in both comment and contact) to a similar misuse this summer by CAP asset Duncan Hunter. It would be impossible for us to track all of these violations without reader assistance. Thank you for your contributions.]

Please add this fact to both of your Civil Air Patrol asset files on Duncan Hunter and Ralph Abraham. Please DO NOT use the USMC emblem in any post you derive from my words to you here or on the Ralph Abraham story. Just state the facts for Civil Air Patrol members and your readers to appreciate. If you can find it, you could show the evidence of what dirty Duncan Hunter did with the globe and anchor.

Earlier this summer, the United States Marine Corps issued a cease and desist letter to Rep. Duncan Hunter, R-Calif., for using the official Marine Corps emblem and phrase on campaign mailers that link his likely 2020 opponent and two Democratic congresswomen to terror.

In a July 16, 2019 letter to Duncan Hunter, the Marine Corps Trademark Licensing Office tells the congressman, “It has come to our attention that your campaign is using the official USMC Eagle, Globe and Anchor (Emblem) and the phrase ‘No Better Friend, NO Worse Enemy’ (Phrase) as an integral part of your political campaign, namely, on at least one fundraising mailer to your constituents.”

The letter demands that Hunter’s campaign “immediately remove the Emblem and the Phrase from its mailers, and, without limitation, from all other campaign materials including websites and other instances where the Emblem or the Phrase are being used. We also request that you provide us with a timetable as to your compliance with our request.”

You should provide your readers with the original letter from the Marine Corps Trademark Licensing Office. 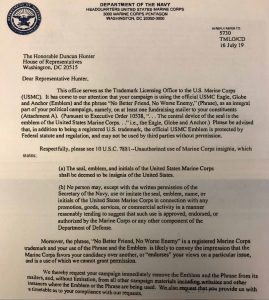 That Civil Air Patrol has yet to correct Ralph Abraham’s political use of our uniform in clear violation of its own written regulations shows just how low Col Mark Smith has been sunk by his handlers. 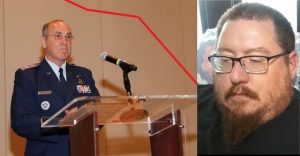 You’ve amassed quite a hall of shame on some very corrupt people here.  I recommend that your readers begin to direct the attention of the dues paying members to the patterns that you have uncovered, because these members are complicit in the funding and enabling of this corruption.

1. In June 2019, it was federal prosecutors who alleged in court documents that Duncan Hunter had used campaign funds to pursue extramarital affairs with five women while in Congress.

2. Duncan Hunter has been a vocal supporter of e-cigarettes with is very own pro-vape op-ed on December 9th 2015.  He even drew from an e-cig in Congress on February 11th 2016 to very handily, but unwittingly, make his opposition’s point.   His loss was the public’s gain.

3. The CDC announced Friday that the number of vaping-related illnesses jumped to at least 450 cases in 33 states and cautioned people against using e-cigarettes, especially those bought off the street. At least five deaths linked to the vaping-related respiratory illness have been reported. This shows us the value of Duncan Hunter’s judgment.  Major Hunter makes very poor choices of where he puts his body and what he puts into his body.