[Editor’s Note: The FBI’s assessment that this CAP event was not a national security threat misses an important opportunity. In reality, the CAP is a soft, incompetent underbelly that allows current threats access to higher levels.]

The [Alaska Wing] pilot who died when the Civil Air Patrol plane he was flying slammed into a downtown Anchorage office building early on a December morning deliberately crashed into the structure, according to federal authorities.

Staci Feger-Pellessier, a spokeswoman for the Anchorage office of the FBI, announced the findings in a short release Monday.

Demarest took off from Merrill Field at about 6 a.m. that morning, heading west over downtown Anchorage before turning east and shearing off a wing against the northwest corner of the Brady Building on Fourth Avenue. The Cessna 172 crashed into the nearby Carr-Gottstein Building seconds later and caught fire.

Both the FBI and the National Transportation Safety Board investigated the crash and found that Demarest “took a CAP plane without authorization from Merrill Field Airport and intentionally flew the plane into a building,” Feger-Pellessier wrote. “Our investigation determined there was no threat to national security and this was an isolated incident.”

Demarest’s wife, Kate Demarest, worked at the legal firm Dorsey and Whitney, whose Anchorage offices were in the Brady Building. She had not yet arrived for work at the time of the crash. A family friend described the crash as a suicide, and the NTSB’s preliminary report on the incident didn’t mention any mechanical issues with the Cessna. 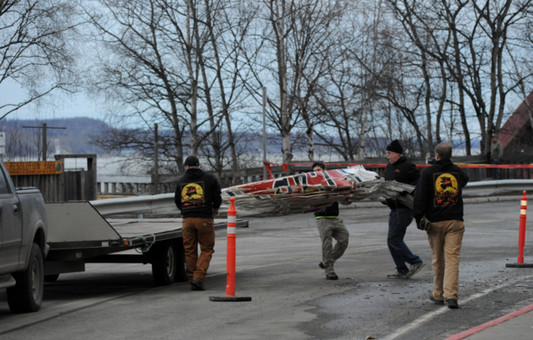