[Editor’s Note: We received an anonymous tip regarding this crash. Thank you for your contribution. This CAP plane crash in Kentucky was attributed to pilot error.]

On August 23, 2001, about 16:45 eastern daylight time, a Cessna 182R, N5419E, was substantially damaged during a landing overrun at Addington Field Airport, Elizabethtown, Kentucky. The certificated airline transport pilot and passenger were not injured. Visual meteorological conditions prevailed for the positioning flight. A company visual flight rules flight plan had been filed for the flight that was conducted under 14 CFR Part 91.

The airplane was operated by the Kentucky Wing of the Civil Air Patrol (CAP). The flight originated from Godman Army Airfield, Fort Knox, Kentucky.

According to a written statement by the pilot, when he checked the airplane prior to departure, the right brake had been listed as inoperative in the airplane logbook. There was no maintenance available for civilian airplanes at Fort Knox. The pilot checked the airplane further, and found that the right brake pedal went all the way down before he felt any resistance. An external examination of the airplane, and the ground underneath it revealed no evidence of leaking hydraulic fluid. The pilot telephoned the CAP wing maintenance officer and discussed the logbook write-up, and his findings with him. The wing maintenance officer had not previously been made aware of the inoperative right brake. He asked the pilot if he felt comfortable flying the airplane to another airport for maintenance. The pilot accepted the flight. The pilot also reported that while taxiing for departure, he checked the right brake, and although the pedal went to the floor, he thought there was some braking capability from it, and continued with the departure. 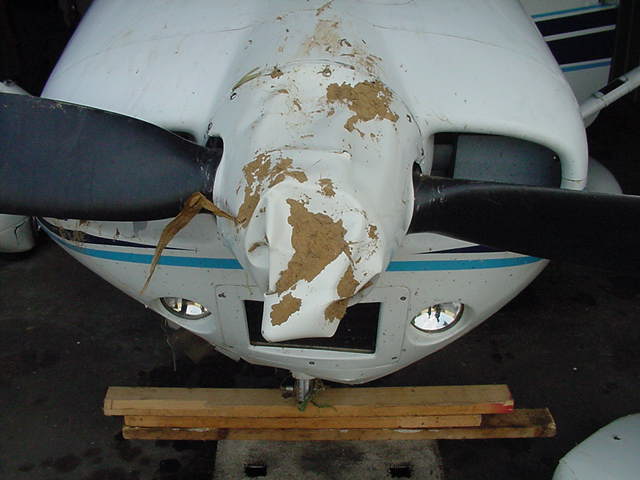 En route to Elizabethtown, the pilot checked the Elizabethtown Automated Weather Observation Station (AWOS), and found that the winds were from 280 degrees at 10 knots. He initially planned to land on runway 23, but then decided that with the wind and bad brake on the right side, he would land on runway 5. The pilot reported that he made this decision due to his previous experience in the Maule airplane, and its lack of tendency to weather vane into the wind with a crosswind. In addition, the pilot performed the approach with no flaps, and a faster airspeed to further minimize any crosswind controllability problems. He reported that he touched down 500 feet past the approach end of runway 5 at 70 knots. Each time he applied the brakes, the airplane swerved to the left.

He would then release the brakes, and bring the airplane back to runway centerline with rudder control and then reapply the brakes. About 1,000 feet prior to reaching the departure end of the runway, he accepted the left swerve and increased braking pressure. The airplane had slowed, but still departed the left edge of the runway at the departure end, with a speed of about 10 mph. The terrain beyond the end of the runway sloped down to a ditch, with a corn field beyond the ditch. The airplane accelerated as it went downhill, and the nose landing gear was sheared off as the airplane went through the ditch. The airplane came to rest inverted in the corn field.

According to information from the Federal Aviation Administration (FAA), runway 5 was 5,001 feet long, and 100 feet wide, with an asphalt surface.

Examination of the airplane revealed that the main wheel brake hydraulic lines were attached to the trailing edge of the tubular steel landing gear struts. The aluminum brake line had chaffed against the aluminum covering over the strut, and had developed a leak near where the brake line had attached to the brake caliper. Dried hydraulic fluid was found inside the aluminum covering, and on the main landing gear strut. 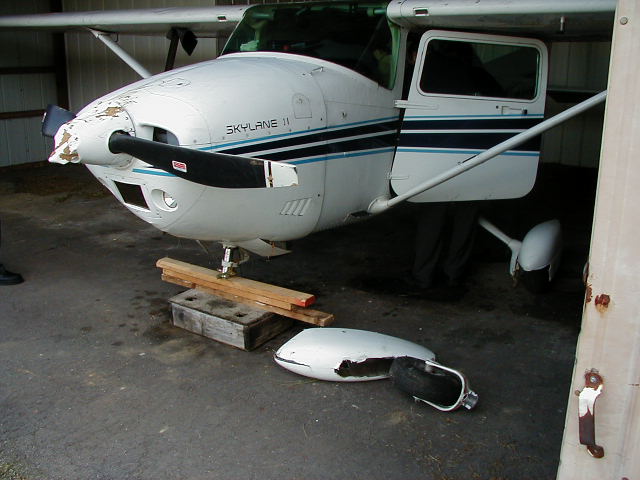 “…Each person performing an annual or 100 hour inspection shall, before that inspection, remove or open all necessary inspection plates, access doors, fairing, and cowling. He shall thoroughly clean the aircraft and aircraft engine….”

According to the inspection form from Cessna Aircraft Co, under landing gear and brakes it states:

According to a memo from the Kentucky CAP Wing operations/maintenance officer:

“…Aircraft discrepancies that affect dispatch reliability or safety of flight should be reported immediately to the Wing Aircraft Maint. Off. This would include exterior lights, engine problems, avionics problems and so forth….”

The pilot of the preceding flight reported that when he taxied for departure from Fort Knox, he noticed that the right brake was “mushy,” but useable. At the completion of his CAP mission, he landed at London, Kentucky, and the right brake was still “mushy.” However, when he returned to Fort Knox, the brake pedal was “very mushy”, and he made a write-up in the airplane log sheet. He did not observe any fluid leaks. The pilot was also asked if he was aware of the order to notify the wing maintenance officer of maintenance discrepancies. He reported that he was aware of the order, and forgot to make the notification after the flight.

The pilot listed his total flight experience as 5,068 hours, with 238 hours in single engine airplanes, and 24.9 hours in the Cessna 182.

The National Transportation Safety Board determines the probable cause(s) of this accident as follows: