[Editor’s Note: We received this news link about this disturbing member out of Kansas Wing. Thank you for your contribution.]

TOPEKA — The Kansas commander [Lt Col Jonathan A. Holder] of a Civil Air Patrol squadron [77th Composite Squadron] who resigned after demanding execution of a state legislator for proposing limits on concealed firearms has been reinstated to the volunteer organization, national and state Civil Air Patrol officials said.

Col Linette Lahan, commander of the Kansas Wing of the Civil Air Patrol, said Jonathan Holder now was cleared to participate in the organization but had chosen not to at this time.

“He is not active,” Lahan said.

Holder, who led a squadron in Emporia, stepped down in January after declaring on Facebook that Rep. Stephanie Clayton, R-Overland Park, ought to die for introducing what he considered an unconstitutional bill to block carrying of concealed handguns in university or college campus buildings.

“This bitch needs to swing from a tree for violating her oath,” Holder said. He affirmed his position after criticized on social media. 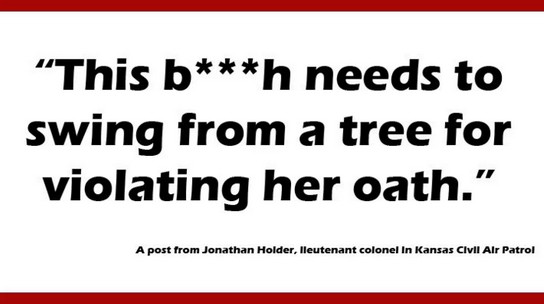 In February, the national Civil Air Patrol at Maxwell Air Force Base in Alabama suspended his membership pending an investigation. He was later cleared to participate in the group, but chose not to do so, Lahan said.

“CAP does not condone such behavior from its members, especially one in a leadership position,” the national office’s statement said.