[Editor’s Note: A North Central Region Civil Air Patrol member contacted AuxBeacon a few days ago regarding inappropriate behavior of members in Minnesota Wing some of which will require time to verify. Allegations shared against multiple members of Minnesota Wing’s Legislative Squadron are easier to cross-check through current and past news articles. This story of misconduct is current as of the month in which we received the notification. A key number of our editors are overseas and incommunicado, so it is uncertain when this story will be approved for release.]

Republican state Rep. Jim Knoblach abruptly ended his re-election campaign Friday as MPR News prepared to publish detailed accusations from his daughter of inappropriate behavior toward her since childhood…

Knoblach’s daughter, Laura, alleges that the prominent legislator inappropriately touched her for most of her life, behavior she confided to close friends, family and authority figures at her school and church for more than a decade.

She said she decided to tell her story to MPR News after exhausting other means to hold her father accountable, including a 2017 investigation by local law enforcement. No charges resulted. She provided MPR News with extensive documentation about her attempts to get help.

Laura Knoblach, 23, said she first remembers her father, an eight-term state representative, touching her when she was 9 years old. He came into her room after she’d gone to bed and climbed in and laid down behind her.

“He would put his arm around me and not let me get up or get away and he would lick my neck or bite my ear,” she said in an interview with MPR News.

These visits to her room, or similar kissing across her arms and neck and biting her ears while they watched movies on the couch, happened so often throughout her childhood and teenage years it became a defining part of her relationship with her father, she said.

There were other routine behaviors, she said, including more than 30 instances where her father approached her from behind and pressed his body against hers in the kitchen of their home, pinning her against the refrigerator or dishwasher and using his weight and strength to keep her from getting away. 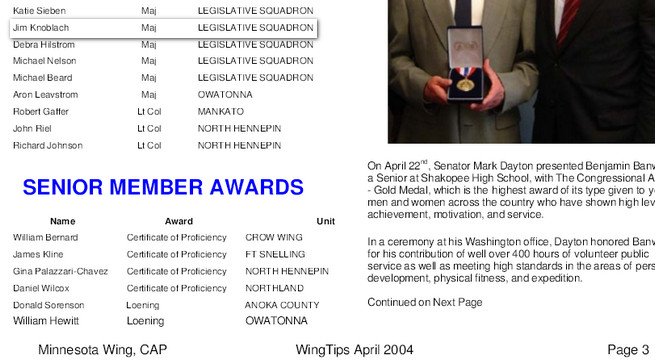 Rep. Jim Knoblach has been a CAP Congressional member since 2004.