[Editor’s Note: Many of your fellow CAP members are suspicious of Wreaths Across America. Within the past few days, we received several article contributions on CAP Col Dan LeClair who is both the WAA Director and the CAP Northeast Region Commander. Laying wreaths on the headstones of veterans is obviously a noble pursuit. Our veterans, living and dead, have earned our respect and recognition. The reader is left to determine if WAA is a worthy cause.]

For several years now, Fox News, along with many other news outlets, has been providing coverage to a charity called Wreaths Across America. The non-profit explains its mission this way:

Our mission, Remember, Honor, Teach, is carried out in part by coordinating wreath laying ceremonies on a specified Saturday in December at Arlington, as well as veterans cemeteries and other locations in all 50 states and beyond.

In short, Wreaths Across America places wreaths on the graves of veterans. According to a 2013 press release, 540,000 wreaths were placed that year. In 2014, 700,000 were placed, and according to the spokesperson I interviewed, this year the goal is 900,000.  Much of the transportation of these wreaths is donated and nearly all the wreath placement is done by unpaid volunteers. Their media exposure is free: According to one media monitoring service, Wreaths Across America was mentioned more than 1,500 times on radio, TV and online just from Dec 3 to Dec 10.

But the wreaths that Wreaths Across America uses aren’t free and they’re not donated. They’re paid for with donated money. Individuals pay $15 to sponsor one wreath, $30 to sponsor two, and so on. The organization’s online form explains its most popular donation is $75 to sponsor five wreaths.

And therein lies a potential problem with the way this non-profit operates.

Every wreath used by Wreaths Across America is purchased with donated money from the for-profit company that started it, Worcester Wreath.

The relationship between the company and non-profit isn’t hidden. It’s easy to find on both the Worcester Wreath site and the Wreaths Across America site. But this relationship should raise the eyebrows of anyone donating to this charity. When donations to a nonprofit are used to purchase goods from the for-profit company that founded it, it raises the potential for problems. Is the non-profit overpaying for its wreaths? Is the for-profit enriching itself at the expense of donors?

How much does Wreaths Across America pay Worcester Wreath?

One way to understand what’s going on with any non-profit is to take a look at its tax returns. All 501(c)(3) charities, such as Wreaths Across America, are required to make the returns available to the public. 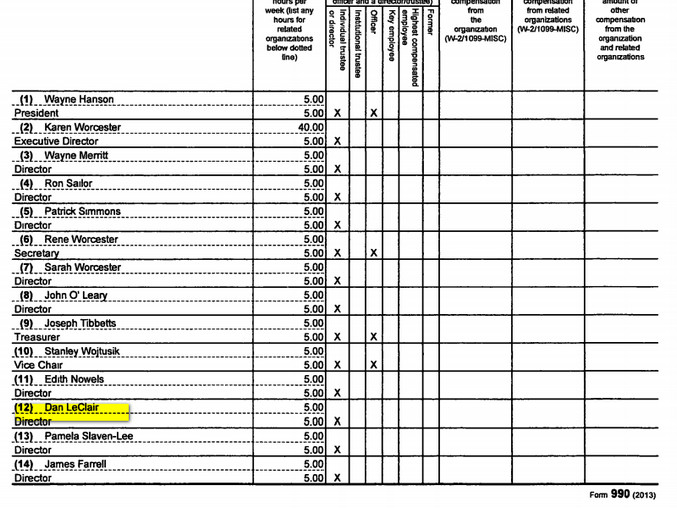 Dan LeClair has been the WAA Director since 2010. From 2011 to present, CAP’s participation has helped increase the WAA revenue substantially from $249,980 to over $6 million.

There’s nothing illegal about this. The related transactions were disclosed and, as I’ve explained, both the for-profit and nonprofit are upfront about their relationship. But anytime a non-profit is raising millions from donations, then transferring a large chunk of it to a related for-profit, it’s time to start asking questions.

When a non-profit is created by a for-profit and buys all its products from that for-profit, that’s a potential conflict of interest. That conflict should be a major concern for anyone considering donating to the non-profit, yet it isn’t addressed anywhere on either the Wreaths Across America or Worcester Wreath websites, or at least nowhere that I could find.

Questions I asked Wreaths Across America

I interviewed Wreaths Across America representative Tobin Slaven by phone, then followed up with some questions via email. Here are three of those emailed questions, along with his responses. I’m leaving his entire responses intact so you can see how much unrelated information I received in response to my direct questions.

Why am I the only one asking these questions?

As I’ve explained, the potential conflict of interest that exists between these two organizations is obvious and easy to find. Yet people in the business of asking questions, namely major news outlets like Fox, apparently didn’t bother investigating this relationship before promoting this charity multiple times to millions of Americans. My emailed questions for Wreaths Across America also asked about this.

What does a Watchdog Think?

Am I making a mountain out of a molehill? I sent my questions and their responses to Sandra Miniutti, the CFO of charity watchdog, Charity Navigator. Here’s part of her response:

Laying wreaths on the headstones of veterans is obviously a noble pursuit. Our veterans, living and dead, have earned both our respect and recognition. But is Wreaths Across America the best way to accomplish that goal? Is it enriching a for-profit company? Could it pay less for wreaths from a different provider? Could it lay more wreaths for the same money?

Based on the information provided by this non-profit, these questions are impossible to answer. Personally, that alone would prevent me from donating to it. Whether you feel the same way is something you’ll have to decide for yourself. But the lesson here is that before donating to any charity, it’s critical to look beyond what the charity does and check out how they’re doing it.