[Editor’s Note: This story was sent to us around Columbus Day earlier this year.]

Member001: [redacted] [redacted] question for either of you when you see this.

Member001: Who is this guy Jayson Allyn Altieri? I got my ass chewed today by [redacted] over the fact that we have Civil Air Patrol members like this.

Member003: Oh, Altieri is not just a member. He is a former BOG Chair, BOG member and an entitled loud mouth with a concealed CAP crash. Why are you asking? What did he do?

Member001: See here. This was shoved in my face today. I was embarrassed, but I think I covered well. 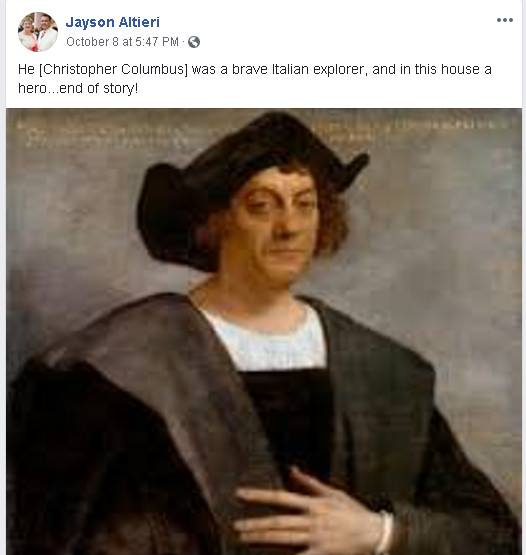 Member002: Oh, that’s not going to be good for the effort in [redacted].

Member001: Ya, no kiddin. What is wrong with this guy?

Member003: Maybe he had a few too many belts with the Daleville KoC?

Member003: Columbus was used as a symbol to rectify perceived abuses of Italian-Americans before we knew just how abusive and brutal he was. Columbus forced the Taino natives on Hispaniola into slavery, and punished them with the loss of limbs and death if they did not gather enough gold for him.

Member002: Guys like LTC Altieri can’t cope with the change that is coming. They also resent the advantages afforded to northern-educated military officers of higher grade, especially the US admiral who exposed Columbus for what he really was.

Member001: What? What are you talking about?

Member002: That’s the start of Americans coming to understand Columbus’ genocide against the Arawak and Taino peoples. Now, many states and cities have replaced Columbus Day with celebrations for Indigenous People’s Day.

Member003: I wonder if the new AZ211 Ketchum crew in Shonto know about this?

Member002: How did [redacted] discover that Altieri posted this taunt?

Member001: I don’t know. I wish I could give him a peace of my mind, but [redacted]. What a disgraceful thing to do.

Member003: You aren’t alone is disliking this guy, there have been some choice words on CAPTalk and AuxBeacon about him.

Member002: Yeah, [redacted], there’s an idea! Everyone one else is doing it so why not you? You can use AuxBeacon to tell Altieri and CAP just what you think of him and his genocidal taunts to North Dakota, Arizona, New Mexico and Puerto Rico Wings!

Member002: I’ve asked around, they haven’t outed anyone who wanted to remain anon.

Member003: Because he might take it down and you and [redacted] just wrote the story for them!

Member002: I think you should take our names out of it completely before sending. I pretty much just told you that I think Altieri is a POS.