[Editor’s Note: This CAP cadet appears to have done a reasonably good job. We are thankful he is okay. The point of the story is that Civil Air Patrol is not mentioned anywhere in WSFA Channel 12’s coverage of the accident. Nor is CAP mentioned in the NTSB database record of the accident. Our contributors are suggesting that this is a classic Civil Air Patrol cover-up.

CAP Maj Jim Matthews, Virginia Wing Group 3 Commander agrees with our contributors’ assessment. He stated: “If I were the reporter and a Wing PAO tried to convince me that a glider incident – resolved successfully and publicly – involving a cadet pilot was FOUO and that I should leave CAP out of it, after I stopped laughing I would immediately file a sidebar story about the Wing trying to suppress the details of the story.”]

DEATSVILLE, AL (WSFA) – A 16-year-old pilot landed in a residential area while operating a glider Friday, according to the Millbrook Police Department.

The boy, whose name has not been released, was not seriously injured in the incident, according to Chief P.K. Johnson. There were no other reported injuries, and no other property besides the glider was damaged.

“This young man was very fortunate, as were the residents in the area,” Johnson said. “I believe had he not quickly assessed his situation and realized that he was not going to make it back to Wetumpka Airport, we very well could be discussing a tragedy.”

The crash landing happened between the roadway and a residence in the 300 block of Fraley Lane in Deatsville. When the boy lost altitude, he made the decision to attempt a crash landing.

The boy was reportedly flying towards the Wetumpka Airport when he realized he wasn’t going to make it. According to a statement he gave police, the boy initially looked for a vacant field to make a safe landing.

After seeing nowhere else to land, the boy told authorities he was forced to use trees to slow his decent into a residential area. During that descent, the glider struck a power line, briefly knocking out power in the area. 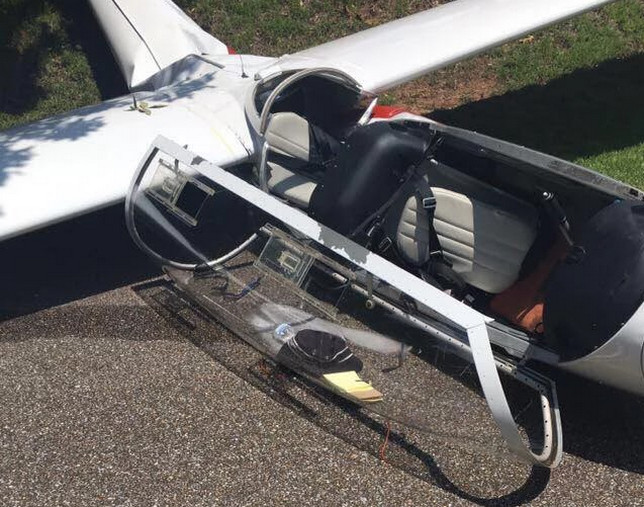 14 Comments on "CAP Aircraft Crashes into Powerline in Residential Area"