Senator John McCain (R-Arizona) has introduced an amendment to the new defense spending bill that would dramatically reduce funding for CAP missions and programs for Fiscal Year 2013. The Senate is expected to vote on the amendment on Monday, March 18.

This amendment (called #50) would be made to HR 933, the full-year Continuing Appropriations Act of 2013 for Defense, Military Construction and Veterans Affairs. McCain’s amendment proposes reductions in CAP operations and maintenance funding in the new bill for defense by $4.5 million, reduce aircraft procurement by $6.8 million and entirely eliminate vehicle procurement.

South Dakota Wing Vice-Commander Lieutenant Colonel Rick Larson stated, “The Wing’s ability to react to requests for assistance from state agencies could be severely impacted by these funding cuts.”

Future support to state emergency managers, such as South Dakota Wing’s aerial photography of the extensive flooding in 2011, could be in jeopardy as the budget for maintenance of the Wing’s six aircraft could be slashed, possibly even grounding some of the planes, he warns.

According to the South Dakota Civil Air Patrol the potential impact of these deep funding cuts is very bad — CAP will likely run out of maintenance funds before the end of the year. It is likely that 75 or more of CAP’s aircraft fleet will have to be grounded, and that there would be a significant reduction in national headquarters staff. In addition, there would be a 21% reduction in overall support for Air Force missions compared to FY12 and a 52% decrease in homeland security and air defense training, as well as negative impacts on all aspects of the CAP program. If a sequestration cut is added on top of this reduction in funding, the impact on CAP could be devastating, officials say. 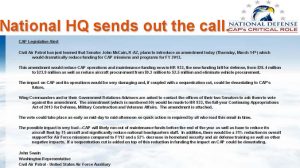