[Editor’s Note: Despite the FBI Background check and the CAP Cadet Protection Training that adult members are required to do, child molestation, sexual harassment and other sex crimes are on the rise in the CAP. It usually requires the parents or victims to report allegations to law enforcement since the adult members will not jeopardize their CAP position to protect the youth. They also fear reprisal which is the standard in the CAP today when one reports regulation violations and crimes to CAP National Headquarters.]

Captain David Joseph Greenberg, 35, [of the North Carolina Wing] was charged with two counts of felony taking indecent liberties with a child in July and investigators continue to compile evidence.

“It is my belief that persons who sexually assaulted children would reasonably be interested in naked or nude photographs of children and ‘souvenirs’ of the abuse such as children’s underwear,” Detective A.G. Samples wrote in an affidavit to obtain a search warrant of Greenberg’s work. “A reasonable officer such as me can and does conclude that David Joseph Greenberg may have evidence located at his workplace that shows a sexual attraction to children.”

The case originated Sunday, July 3, when the Cabarrus County Sheriff’s Office received a report. The parents of two Cabarrus County teens contacted law enforcement about sexual exploitation of and indecent liberties with a minor. The two 14-year-olds were members of a Civil Air Patrol Academy [CAP cadet encampment] in Charlotte, and Greenberg was a leader of that group [111th Search & Rescue Composite Squadron], according to court documents.

One of the children, referred to as Victim 1 in the affidavit, went to Carowinds with Greenberg in June. Greenberg insisted on picking the child up and driving him home afterwards.

According to an affidavit, Greenberg asked Victim 1 to change in the same stall while in a changing room at the park.

“When Victim 1 said no, Greenberg offered him $50 and then up to $500 over a period of time,” the affidavit said. “After this, victim 1 went into multiple other stalls to get away from Greenberg, but Greenberg followed him to each stall, peeking through the cracks.”

Also at the park, the CAP leader touched the teen [CAP cadet] about 10 times while waiting in line for rides, mostly around Victim 1’s chest and nipple, according to court documents.

Later that in the car, the teenager [CAP cadet] sat in the front passenger seat. Greenberg insisted on playing the nervous game, where one person touches the other person’s leg, slowly moving up the thigh until they get nervous and stay stop. According to the affidavit, Greenberg kept touching victim 1’s leg even though the teen said he didn’t want to play.

Court documents said the two stopped at the airport as well as China Buffet and Walmart near Concord Mills on the way home. At Walmart, Greenberg went in to get aloe for the teenager’s sunburn.

In June 2016, the Civil Air Patrol group had a pool party at one of the volunteer’s houses in South Carolina. According to court documents, Greenberg followed Victim 2 to the bathroom and set up a phone to record him.

“Greenberg kept trying to put the aloe on him and had him take his shirt off to do so even though Victim 1 wanted to wait until he got home to do so,” the affidavit said. “While this was happening, Victim 1 believes that Greenberg was taking pictures of Victim 1 Also on the way home, Greenberg continued to grab Victim 1’s hand, trying to put it in his groin region. Greenberg then tried to get Victim 1 to sleep over that night.”

[Note: Capt David J. Greenberg originally started with the Suffolk Cadet Squadron 10 in Holbrook, NY in May 2012. He also served on the New York Wing Cadet Encampment Staff in 2013 as the Golf Flight Training Officer for Cadets. Since May 2015, he has been the Finance Officer of the 111th Search & Rescue Composite Squadron in Charlotte, North Carolina.] 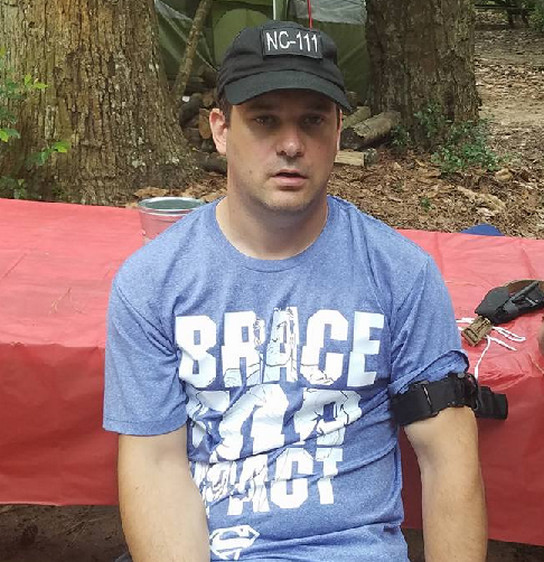